Outback Kicks 'The Drug of Discounting'

Be wary of “the drug of discounting.” That’s the message from Bloomin’ Brands chief executive officer David Deno.

“… You’ve got to be very careful of that,” he said Wednesday during the company’s second-quarter review. “You can’t rely on that to grow sales.”

Bloomin’ has pushed against this longstanding sector strategy for a couple of years now, really ramping up in the past few quarters. And, naturally, it’s resulted in short-term traffic bruises, yet hits the parent of Outback, Carrabba’s, Bonefish, and Fleming’s is more than willing to absorb.

Currently, discounting—or not discounting—is affecting nearly every aspect of Bloomin’s business. It’s influencing the company’s sales levers and redefining how to talks to consumers. Also, what that shift in message means for restaurant design, loyalty, per person average, and the definition of profitability.

A case against discounting

Adjusted earnings per share came in at 36 cents, with revenues down 1 percent to $1.022 billion. Outback’s unit count also declined to 727 (domestic) as of June 30 from 732 on March 31. Five of the closures were franchises. The company credited the revenue slide to its decision to refranchise 18 Carrabba’s earlier in the year, and foreign currency translation.

Here’s how traffic has trended for Outback during this discounting turn:

In the past three years, Outback poured $50 million into customer-facing improvements. This includes food quality, portion enhancements, service and labor investments, and efforts to reduce complexity in the restaurant. Additionally, Bloomin’ invested north of $400 million in remodels to contemporize brands and improve curb appeal.

Alongside these changes, Outback pursued incremental levers, Deno said, to accelerate growth across off-premises, loyalty, and digital. Importantly, the strengths of these efforts enabled the brand to make tactical, long-term brand health decisions it simply couldn’t before. Most notable, an opportunistic reduction of discounts.

Outback’s Q2 discounts were down 21 percent, year-on-year. The brand decided not to replicate some value-oriented promotions despite a heightened competitive environment, Deno said.

That choice resulted in a 100-basis-point negative impact on traffic, or about 1 percent to the comp.

“We're growing this business for the long term. We're trying to seed this idea of building long-term, healthy, sustainable traffic growth that isn't reliant on discounting as a way to drive the comp sales results.” — Chris Meyer, Outback CFO.

Much of this is related to reduced circulation of traditional marketing vehicles. And while there is a natural pickup in check average that accompanies a drop in discounting, CFO Chris Meyer said, the top-line boost doesn’t fully offset negative traffic.

“We are comfortable with this tradeoff,” Meyer said, “given the quality of traffic that is coming into our restaurants. This quality is enhanced by the improved ROIs on our marketing programs and the monetization of our investments in food and service.”

Deno said Bloomin’ would continue to evaluate its discounting PPA tradeoff throughout the year.

“We're growing this business for the long term,” Meyer added. “We're trying to seed this idea of building long-term, healthy, sustainable traffic growth that isn't reliant on discounting as a way to drive the comp sales results.”

But all of that noted, discounting isn’t dead at Bloomin’ Brands. It will always be a part of the company’s portfolio, Meyer said. The difference is, quarter to quarter, the company will evaluate whether or not it’s the right strategy relative to the LTOs running and so forth. It won’t be the safety valve it once was. “And our longer-term goal, of course, like we've always talked about, is to have our pricing be less than inflation to help with the value equation there,” Deno said.

Check average rose 2.9 percent at Outback in Q2 after hiking 3.4 percent to start the year. Bloomin’ expects its per person check averages to ratchet down as the year progresses. Absolute menu price increases were lower sequentially from Q1 to Q2, with menu mix representing a prominent component. And that’s driven more by value-oriented LTO price points, which ebb and flow by the period. Meyer said it’s a key point to mention since both of those items were partially offset by the increase in check average that comes with a reduction in discounting.

“The company's done a really good job having the discipline to walk away from unprofitable discounting and build healthy traffic. That's where we're going to be going,” Deno said.

But let’s highlight delivery, where Outback is ready to launch some significant news. 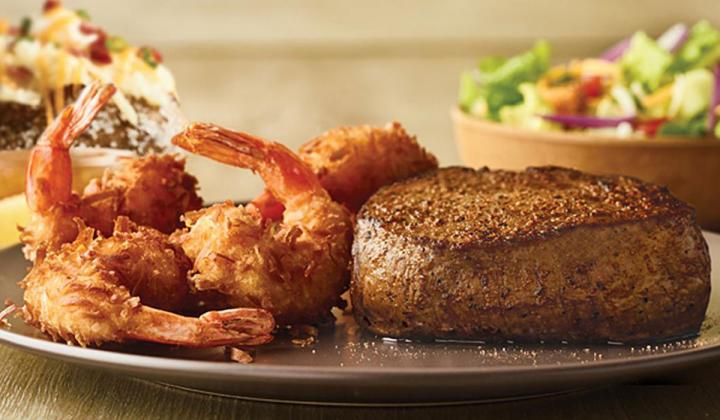 A big delivery announcement is coming for Outback.

A partner in the works

Delivery is now available at more than 630 locations across Outback and Carrabba’s. Off-premises at Outback represented 14 percent of sales in Q2, up 18 percent, year-over-year. Deno said, with the majority of rollout complete, Bloomin’ is ready to leverage its increased scale through additional marketing tactics to drive awareness.

Over the past two years, the company developed its own in-house delivery platform while simultaneously testing with third-party companies “to fulfill our strategy of omnichannel access.”

Throughout this, Deno said, the company learned the frequency and behaviors of its off-premises consumers. What it found was a different type of guest with distinct purchasing patterns.

Bloomin’ recently came to terms with a national third-party delivery partner, he added. Bloomin’ didn’t say which aggregator it’s selected, only that the deal is close to done and news is coming.

“This channel will complement our existing platform,” Deno said. “Importantly, this will help expand our reach to customers who are loyal to the third-party delivery companies.”

Meyer added that the impending partnership should build traffic in the back half of the fiscal calendar.

Deno said “the terms are very favorable to the company.

“Part of this third-party delivery partnership optimism comes from the testing that we've been doing internally with third-party providers,” Meyer said. “We've seen significant lifts. It's just been up into this point in time where the economics of third party, now they make more sense for us, so that's why we have the optimism on the delivery side.”

Once it launches, Bloomin’ will have its own channel in addition to a multichannel opportunity with a third-party provider. The latter, as Deno mentioned, provides Outback and Carrabba’s with access to a customer that it typically doesn’t see in its own channel. But the company can still use its own platform to grow the business, improve profitability and scale, and then enjoy the incremental sales and exposure from guests who tend to be more app loyal than brand loyal.

“We’ve invested in infrastructure, culture, service, which has resulted in increased sales and profitability,” Deno said. “That exists for us today. So the ability for us to plug and play a third party will be very easy. And then as we go forward, continuing to expand the information and our service on our own channel will be important as well. So we're very, very enthusiastic about the multichannel capability this brings. And this is something we've been talking about for quite some time.”

On the loyalty front, Bloomin’s Dine Rewards now has more than 9 million members. Deno said the company is using data to enhance customer segmentation opportunities. This centers on new and experiential features targeted to core guests. The company’s investments in CRM strengthen engagement through customer-centric communication while providing a higher return from marketing spend, Deno said.

“These investments and key platforms help fortify the core business and expand our reach to new and existing customers,” he said.