In Portuguese storytelling, a vixen’s wedding is another name for a sun shower, when it rains although the skies remain bright. The term comes from a folktale about an unlikely romance between a fox and a wolf who choose both rain and sun on their wedding day, thus bringing good fortune. It is also the name of chef Todd Duplechan’s newest restaurant at the Arrive East Austin Hotel in Austin, Texas, which features a mashup of Goan and Portuguese food—the former being a southwestern state in India, along the Arabian Sea.

As in the fairytale, the Texas state capital is often a place where opposites attract. Cowboys and hipsters. Barbecue fanatics and vegans. The beauty of the city is that these seemingly incompatible forces coexist peacefully. 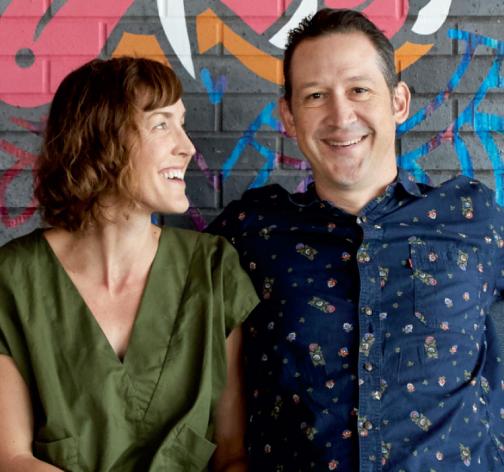 Kitchen tool you can’t live without: My knife.

The restaurant industry in one word: Tough.

Favorite way to destress outside of the kitchen: Watch my kids’ baseball games.

This philosophy of duality is certainly evident at Vixen’s Wedding, which draws from the Lone Star State’s preponderance of meats and vegetables to form the backbone of a decidedly un-Texas menu.

“We start by looking at what’s around. Then, we try to figure out how we’re going to incorporate that into the lexicon of this idea of spice and lighter, really punchy food,” Duplechan says. Some ingredients, like tomatoes and pumpkins, are often found in Indian food already, which makes them easy translations.

“But then there are also things that are a little bit more fun, like broccoli, that you’re really not going to see in a place like India,” he says. “We run it through our creative process and see if we can get something that reflects both places.”

So how did a Texas-born chef with Cajun lineage end up cooking the cuisine of a Portuguese colony in India? It all started with his time at Tabla restaurant in New York, where he cooked under the legendary Floyd Cardoz.

In their conversations, Cardoz opened Duplechan’s eyes to the different cultural aspects of India, of which Duplechan admits he knew very little at the time. He would often study the topics he and Cardoz discussed on his own, and this soon informed the type of cuisine he wanted to cook when he opened his first restaurant. He got the chance in 2012 with Lenoir, a chic Austin spot whose cuisine flows seamlessly from Mediterranean to Indian.

One of Duplechan’s greatest takeaways from his education with Cardoz was eschewing the idea of authenticity, a theme that runs through all his restaurants. “I don’t really love the idea of authenticity. And I know that’s not been a popular [opinion],” Duplechan says. “But, so many things that are deemed ‘authentic’ just got frozen in amber at a specific time in history for no particular reason.”

A dedication to traditions, which are in some cases dated, can lead to rigidity with chefs and guests refusing to stray from what they consider canon. For Duplechan, cuisine is constantly evolving. Italian food in Italy, for example, is always going to be different from the same dishes cooked in America because of different ingredients, climates, and chefs.

The history of Portuguese colonialism as it relates to food also struck a chord with Duplechan. “Before [colonists] kind of took over the world, food was very segregated and very different,” he says. “They went all over the place and stole from here and put it there and re-created the food map of the world to what we know now.”

Goa, in particular, with its inimitable mix of Portuguese and South Asian dishes, was especially tantalizing. “It’s two cultures that were forced together for no reason other than imperialism, but then they get this food culture that is more than the sum of their two parts,” he says.

Before opening Vixen’s Wedding in 2019, Duplechan embarked on a fact-finding mission to India, where he worked at two of Cardoz’s Mumbai restaurants. As Duplechan says, there is only so much research you can do from a distance; at some point you have to visit and experience a place to truly understand it.

It was also revelatory to him to see how creative those kitchens were with interpretations of dishes. “They put their own stamp on it, and that made me feel good because that’s what I wanted to do,” he says. “I didn’t want to go at it as somebody who says, ‘I’m a professional in Indian food,’ because realistically I’m not. I wanted to come from the standpoint that I’m really inspired by this idea, and I want to get in this realm of ingredients and ideas and just start messing around and riffing.”

The result is one of the city’s most unique and sought-after restaurants.

Or, as Texas Monthly put it in its review headline, “Unlike Any Restaurant in Austin.” How often—if ever—does one come across quail cafreal on a menu? The North African dish was disseminated by the Portuguese centuries ago and has become part of the canon of Goan cuisine.

“On pretty much every menu, you see chicken cafreal, which is the classic,” Duplechan says of restaurants in Goa. “We wanted to take that and play with a little bit.” Because Duplechan considers Texas quail to be “awesome,” he paired it with a more traditional Goan sauce that is equal parts spicy and vinegar-based. “It’s such a good combination of flavors. If people didn’t know better, they’d say, “Man, is this like a Texas thing?’” he says.

Vixen’s Wedding also has a communal eating experience, which means that everyone who comes in to dine has the chance to break (turmeric sourdough) bread with their neighbor, whomever that may be.

And we almost forgot to mention: Austin is known for its sun showers.