Olive Garden on Delivery: We're Not Missing Out on Anything

Some of the most successful brands in casual dining, namely Olive Garden and Texas Roadhouse, have emphatically resisted third-party delivery during its surge into the restaurant marketplace. Darden chief executive officer Gene Lee chief among them.

During the company’s June 20 fiscal 2019 review, Lee called the space “an immature business,” and one that’s far more margin destructive than incremental. “That’s just my opinion,” he said. “We’ve got some [delivery] tests going on and the results aren’t compelling enough that we’re running out and doing something with it.”

Even without any direct proof, Lee’s opinion would carry significant weight. But he’s got that as well. The Italian giant’s off-premises sales increased 9 percent in the fourth quarter, providing a two-year stack of about 18 percent, to represent 15 percent of total sales. Olive Garden is generating growth without engaging aggregators.

READ MORE: How the Italian industry's Big 3 have held their own.

Instead, Olive Garden let its in-restaurant experience drive a compelling off-premises proposition. One where the consumer wants to come and pick up because the value and quality is appealing. “I think when you do that it helps create the demand for the off-premises visit,” Lee said.

Where Olive Garden refuses to negotiate considers the cost to consumers. Lee said third-party delivery burdens are being shifted from the company to the guest. Brands are moving away from shouldering that added cost in-house, as they did in the early days of delivery, to expecting diners to pay more for the benefit of convenience. And, in many cases and for many brands, this is an effective strategy. But is it sustainable?

Darden hasn’t seen the proof yet, Lee said. “At this point, I’m just a little uncomfortable with that,” he said. “That [being] what percentage is the consumer long term willing to pay of their overall check to have that convenience? That has to be proven out to me over time [before] that’s something that we want to do.”

"We don’t think that the economic burden [of third-party delivery] has changed that much. We think it’s just been shifted from the restaurant to the consumer.” — Darden CEO Gene Lee.

Olive Garden’s No. 1 selling point centers on the value proposition. Asking customers to pay more for delivery just doesn’t jive with the message. “I’m watching what everybody’s doing,” Lee said. “We continue to believe, especially in Olive Garden, that it’s much better for us to focus on the catering and [the self] delivery party of this.”

Olive Garden is putting its operational strength behind that particular off-premises avenue. The chain moved the dollar size of orders down from $100 to $75. And it changed from requiring 24-hour notice to 5 p.m. the day before. Even so, Olive Garden’s average catering order is clocking well over $300, Lee said. “It’s a highly rated, from a satisfaction standpoint, event,” he said. “And so, again, we’re watching what’s happening. We don’t think that the economic burden [of third-party delivery] has changed that much. We think it’s just been shifted from the restaurant to the consumer.”

“A lot of this business comes in and is out the door before 11:30,” he says. “And a lot of the catering that we’re starting to do now is really—it’s pre the big-meal period. So that’s really helpful.”

With these units, Olive Garden can ask itself, are there attachment opportunities? Can it attach additional sales to the normal off-premises experience? Lee provided an example: As the brand starts building these dedicated spaces, it can get more beverage sales.

“We’re still in the infancy of thinking about that, but we think it’s a fairly big idea, which could grow that overall percentage over time,” he said.

Put simply, Olive Garden believes it can grow off-premises sales without sacrificing what it does within the four walls, “which is create a great in-restaurant experience,” Lee said.

It’s too early to estimate the rollout of these new spaces, he added. It needs to be added in a specific location where the restaurant can staff it during downtimes without adding a lot of labor. It has to be close to the kitchen and have the right heating and holding areas. “I don’t want to put a price tag on it just yet,” he said.

“I don’t think we’re missing out on anything,” Lee added of third-party delivery. 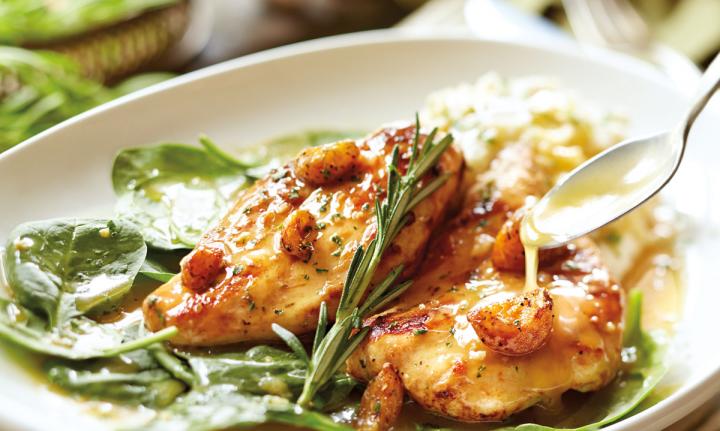 This kind of comp breakdown has been the story for Olive Garden lately. The chain continues to cut incentives in favor of everyday value. Lee said, adjusting for the lack of promotions, guest counts would have tracked positive in Q4. Also, even with the pullback, Olive Garden’s traffic gap to the industry expanded throughout the period.

A positive trend, he added, has been all-time guest satisfaction ratings. The brand recorded its highest Mother’s Day sales ever this year.

Olive Garden’s investments in embedded, sticky value are paying off. The company refreshed its 5 for $5 value drink platform in Q4 and increased awareness on everyday deals through secondary TV advertising. Instead of LTOs, Olive Garden pushed constructs like its Lunch Duos at $6.99, everyday Early Dinner Duos at $8.99 and Cucina Mia! Starting at $9.99.

Lee said the industry as a whole has shifted toward everyday value over pulsed discounts. “We’ve been saying for a while that the consumer didn’t want to be told what they had to do, what they had to buy to get that value,” Lee said.

Overall, the industry is facing volatile traffic trends, he added. Olive Garden’s solution is to keep adding value to the consumer proposition to inspire loyalty and repeat visits over deal-driven barrages. And, right now, that means withdrawing incentives based on the environment.

“There’s no doubt,” Lee said, “we’ve taken a lot of currency out of the marketplace. And we do have that available to put back in if we think that’s the right thing to do.”

It’s one benefit of having scale. Olive Garden doesn’t need to make short-term decisions to drive a few extra guests here and there that aren’t really profitable.

Lee said Olive Garden still had opportunity ahead to capitalize on operations. Notably, improving throughput so it can capitalize on peak times driven by advertising spend. “We have long waits in our restaurants,” he said. “We talk a lot about convenience. That’s not very convenient. And, consequently, we’ve got to get better tat making that experience more convenient for the consumer and we have to get more people and guests throughout our restaurant each hour and shorten up those dining experiences. So we’re going to continue to focus on this and we think it has big upside.”

How Restaurants Can Court Holiday Diners with a Gluten-Free Marketing Campaign
Chili's to Give Away 27,000 Molten Chocolate Cakes
Cotton Patch Cafe Launches 2 for $22 Meal Deal