Olive Garden is Changing—But Only Because it Can

The Darden giant is shifting strategy from a position of strength.
December 2018 Danny Klein

Darden flagship Olive Garden hasn’t lacked for consistency. With same-store sales growth of 3.5 percent in the second quarter of fiscal 2019, revealed December 18, the classic 858-unit chain has reeled off 17 consecutive periods of positive gains. Yet there was one red flash in Olive Garden’s performance: comparable guest counts declined 0.8 percent. Why this happened, though, falls under an enviable narrative. The reduction in traffic was essentially Olive Garden’s own doing, which might sound counterproductive but is really anything but. And Darden CEO Gene Lee believes it reflects an encouraging sign for chain restaurants as a whole.

What Olive Garden did this past quarter was cut back incentives, primarily coming through email. It ran 16 fewer weeks during the quarter and that includes some weeks where Olive Garden presented multiple offers last year. “We really didn’t have any offers out there this year,” Lee said during Tuesday’s conference call. “We felt it was—with the demand environment being strong—it was a good opportunity to remove some of that incentive so that in the future, if need be, we could add it back in.”

Basically, Olive Garden was in a position of strength where it could start thinking about growing its sales profitability, and not just from spikes in its promotional calendar. Beyond Olive Garden’s past run of stellar results (last quarter's comps growth of 5.3 percent was the best since at least 2008) and how that stabilized its top and bottom line, Lee said the environment was ripe in the industry to do so. If Olive Garden had pushed its typical incentives, it would have soared past the industry average, he added. (Darden's results were about 230 basis points above its peers this quarter, down from 450 in Q1. Olive Garden outpaced Knapp-Track by 230 basis points). But Darden wasn’t “really concerned about that.”

“What we’re really focused on is building a really healthy guest base and trying to ensure that we create some opportunity in the future, if need be, to put back some of these incentives into the business,” Lee said.

Olive Garden is putting a promotional ace in its pocket for rainy days.

The overall picture he’s painting looks something like this: Overall, the industry is performing well as dynamics shift. Large, nationally advertised brands (like Olive Garden) are taking share thanks to increased advertising budgets. Meanwhile, the industry is becoming more promotional and check average growth is sub-2 percent for “the first time in a while.”

“It will be interesting,” Lee said, “to see whether these large brands would continue to give up margin to advertise and promote at the intensity they’ve been promoting at.”

There’s a significant increase in ad spend at this tier of the restaurant industry. And the vast majority of those products being touted—from sit-down to fast food—are aggressive in price. Lee said the industry hasn’t seen this type of check average in a long time for any extended period. “… This is putting tremendous pressure on their margins, and we’ll see how long they’re willing to eat into their margin growth to have this kind of intensity out there.”

The success and nature of Olive Garden’s low-complexity operating model allows it to be nimble amid this value rush, Lee added.

“We feel we have levers that we can pull, and we can compete effectively against them. Right now, we think the consumer is in a really good place. We're operating at our lowest unemployment in 50 years; confidence remains high,” Lee said. “As we watch the guests, they're continuing to buy across our menus. They're adding on to their entrees, they're buying up—it feels like it's a really good environment, so we think it's prudent to have the strategy that we have right now.”

This isn't the first time Darden has scaled back promotions at Olive Garden. The brand chose to shift from nine to six deals last March, including removing the Buy One, Take One deal for the time being.

Even with rising checks, Olive Garden is having no problem promoting everyday value.

More on that strategy

Olive Garden’s total sales upped 4.9 percent in the quarter, aided by 1.4 percent growth from new restaurants. Check average also lifted 4.3 percent thanks to 1.9 pricing and 2.4 percent menu mix. The menu mix was driven primarily by shifts in consumer preference, Lee said, and, to a lesser extent, a $1 price increase for the Never Ending Pasta Bowl and a reduction in incentives.

The guest count decline of 0.8 percent “was a direct result” of that same reduction initiative, he said.

Olive Garden focused on the everyday value proposition instead of the value-seeking one. The chain redesigned its menus to more prominently showcase two platforms that fit the bill: unlimited soup, salad, and breadsticks, and the Cucina Mia create-your-own pasta. Then Olive Garden chose to enhance the value of one of its highest-preference entrees—Chicken Alfredo—by adding 50 percent more chicken. Lastly, it launched a 5 for $5 beverage platform.

"All I'll say is the economics of this have to change, along with the execution. The execution of a third party has to improve dramatically." — Darden CEO Gene Lee on third-party delivery.

There was a time, Lee said, in Olive Garden’s history when it started to drift a little too upscale for its customer base and didn’t focus on what gave it an advantage over smaller competitors. “I think the big difference between where we are today in this cycle versus where we were seven or eight years ago when Olive Garden was into a good growth cycle is that we're making investments back into the business,” he said.

And the Chicken Alfredo boost is an example of the kind of changes Olive Garden can make now to increase value and drive guest counts and sales into the future.

“We think we have some other opportunities. We're being innovative from a marketing standpoint,” Lee said. “I think our marketing is as relevant today as it has been in a long time. And, more importantly, I think the younger consumer—the millennials—they really enjoy Olive Garden. They enjoy the value in it. They enjoy the communal piece of it, of coming together and enjoying a meal, so I think it's really well positioned, and we're going to continue to double down on simplification and value.”

Lee hasn’t bee shy in his criticism of third-party model and how it clashes with Olive Garden’s trajectory. Off-premises business grew 10.3 percent in Q2 and represented 14.6 percent of total sales. How? From takeout and catering.

Lee said Olive Garden is testing a small group of restaurants and monitoring the results in regards to third-party. But that’s about it. “All I'll say is the economics of this have to change, along with the execution. The execution of a third party has to improve dramatically,” Lee said. “The satisfaction of the guest is not great using these services, and we're focused on creating a great off-premises experience for our consumer.”

“We'll encourage them to come pick it up,” he added. “We're still growing at a good rate. I really like what's happened in that business. The satisfaction of our consumer using that experience is really high, and so, at this point, we have no additional update, really, on third-party.”

Put simply: Darden doesn’t need delivery and won’t bend to its operational whims until the terms make sense. The company isn’t willing to hand over the data or the margin impact.

But that’s not a knock suggesting Olive Garden isn’t deep into off-premises business. It’s just going at the sector in ways it can control. Lee said, from demographic data, Olive Garden has found its off-premises customers to be mainly off-premises-only guests. They don’t really dine inside an Olive Garden all that often. “They're probably using a chef-driven restaurant or a higher-end restaurant. So, we believe all that is incremental,” he said. 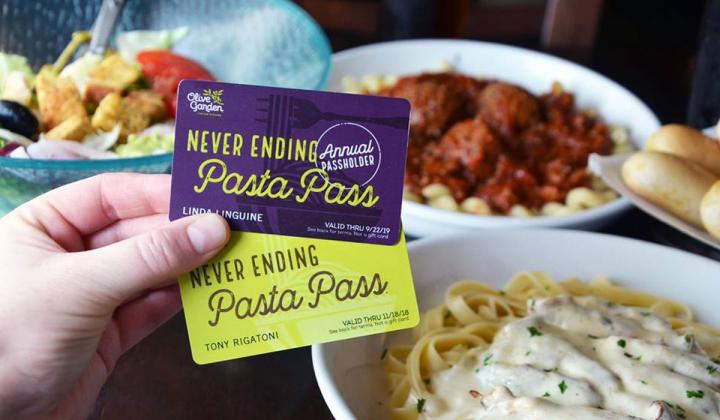 Olive Garden's Never Ending Pasta Pass sold out in less than a minute.

Overall, however, Olive Garden wants to win as many occasions as it possibly can, Lee noted. He just looks at them as two totally different occasions, and “what we work hard at is being top of mind in each of them, and we'll never know for sure what's incremental and what's not,” Lee said. “We just know we want to play, we want to be very good, the best at off-premise, and try to create a frictionless experience. We want to be the very best of in-restaurant that we can possibly be, and that's what we're working hard at.”

Olive Garden has completed about 230 remodels to date in the last four years (28 this past quarter). Lee said the chain needs to finish another 70 to get the “fleet up to speed.” Then it will start refreshing the “Farmhouse” designs, which won’t be nearly as capital intensive as the “Revitalia” updates. The process isn’t as dire as some brands, though. “There's times I walk into an Olive Garden that's 25 years old that really hasn't been remodeled recently, and I'll look around and say, ‘Boy, this place looks great. We've got good furniture, we're well painted, it looks clean.’ And so, our team has done a great job keeping these buildings in outstanding condition,” Lee said.

Not to ignore, Olive Garden did have two of its leading promotions to execute this past quarter. The Buy One, Take One and Never Ending Pasta Bowl deals ran, with the latter being supported by the famed Olive Garden Pasta Pass. All 1,000 passes were claimed in less than a minute, Lee said. Even with the price going up for the first time in five years, Lee noted the value ratings were strong.

In fact, even with a steady rise in average check, Lee said value has gone up at Olive Garden in general. This can be credited to a degree to menu moves made to mitigate the mix growth, like the Chicken Alfredo change and Never Ending Pasta Bowl promotion (50 basis points). “We saw some significant increase in the mix there, and because the promotional calendar had the value promotions there, we saw a lot of trade up out of the promotional items into that item,” Lee said.

With the Never Ending Pasta Bowl taking a $1 increase, Lee said Olive Garden witnessed some trade out into regular, higher-priced menu items. Additionally, the $1 boost added some contribution to the mix coupled with less incentives (accounted for 30 basis points).

“The big change we made with our Chicken Alfredo dish and the positive mix change that had in Q2 was primarily because we had lower-priced promotions,” he said. “As the promotional calendar goes up and the price point goes up in the third and fourth quarter, you'll have less trade—the trade will be less beneficial … I feel good about our promotional calendar in the back half of the year.”

If need be, Olive Garden can pull that promotion lever and kick up its incentive strategy later in the calendar year.

As a company, Darden reported net income in Q2 of $115.6 million, or 92 cents per share, up from $84.7 million, or 67 cents, in the same year-ago period. FactSet analysts called for earnings per share of 91 cents. Sales increased 4.9 percent to $1.97 billion, just missing the Wall Street prediction of $1.98 billion. Blended same-store sales hiked 2.1 percent.