One of East’s employees sipped a beer, placed it on the table, and then looked at East, saying, “We need a place like this, for us,” meaning the Hispanic demographic.

That set Hicks on the path of Ojos Locos, which he called “one of the most intriguing, niche, successful” brands he’s ever been a part of in his 40-year foodservice career. The concept debuted in 2010 in partnership with East and Front Burner Restaurants executives Jack Gibbons and Twin Peaks founder Randy DeWitt.

Ojos Locos is similar to Twin Peaks and Hooters in nature, but specifically for Hispanic customers. The restaurant features wall-to-wall televisions mostly offering Latin coverage and an all-women wait staff that’s mostly fluent in Spanish. Hicks described Ojos Locos as a “home game for the Latins and an away game for gringos.”

“It’s a customer that we have talked to for the last number of years, and we own the category,” Hicks said at the recently held ICR Conference. “Reminds me of the old P.F. Chang’s days where they were the first to market. Ojos is the first to market here to this customer.”

Since its debut about a dozen years ago, the sports bar has grown to 18 locations, with 14 in Texas, three in Arizona, and one in New Mexico. Several years ago Hicks bought out his partners, and then in 2018, Ojos Locos received an investment from Garnett Station Partners, which has fueled the past 10 restaurant openings.

Store-level margins are around 30 percent, and the brand swings about $1.5 million in store-level EBITDA per restaurant. The chain took some price in 2021 because of the inflationary environment, and will look to do the same this year, but the restaurant remains sensitive to value. Hicks said Ojos Locos is "scrubbing P&L" to find any opportunities outside of COGs to keep prices low, but still hit profitability.

The concept plans to open 11 stores in 2022—Southern California and Las Vegas being key markets—but long-term, Hicks believes the brand is capable of reaching 150 units, including 90 by 2025 (equal to 400 percent growth). That doesn't count the potential of licensing or franchise agreements in international markets.

Restaurants are usually 6,500 to 7,000 square feet, with $1.9 million in net buildout costs and a payback period of little more than a year. When seeking sites, Ojos Locos searches for both conversions (i.e. Applebee’s, TGI Fridays, Luby’s) and ground-up opportunities.

“This customer uses Ojos not only for sports and to meet family and friends, but it’s their casual-dining experience,” Hicks said. “That’s how they use this brand because we’ve built it for them and they authentically and genuinely feel that.” 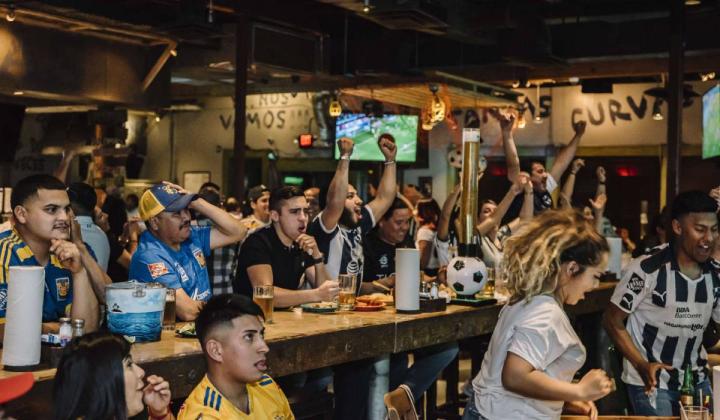 The restaurant leverages an affordable, scratch kitchen, Hicks said, with street tacos, hamburgers, and wings representing nearly 80 percent of the food mix. Entrees are priced lower than $10 and typically served within 10 minutes. Ojos keeps its menu at or around 25 menu items to maintain simplicity and high levels of execution.

The beverage menu is even more popular, with its large selection of tequila, margaritas, and beer. Ojos Locos claims to have popularized the first “Balon,” a long cylinder-shaped container that can hold up to 100 ounces of beer. Beverages mix 65 percent, compared to 35 percent for food.

The sports bar sees 35 percent of its sales during happy hour, which is Monday through Friday from 2 p.m. to 7 p.m. and includes specials on house margaritas, mojitos, and domestic and import bottles and drafts. Dinner takes up 30 percent, followed by 20 percent at late-night, and 15 percent for lunch.

“We take a lot of passion and pride in our food. We are a scratch kitchen, and have been there for 12+ years,” Hicks said. “No interest in changing that. Most people that experience the business, I hear comments that the food is much better than they thought.”