Prime Rib sliced at O'Charley's, where veterans get a 10 percent discount all year.

The 200-unit chain has been a community-driven brand since day one.
January 2019 Danny Klein

Craig Barber, a former Denny’s franchisee who once chaired the brand’s franchisee association, joined American Blue Ribbon Holdings LLC in October of 2017. By January he was also president of O’Charley’s and its 203 locations nationwide. There were a lot of reasons Barber was excited to head up the legacy chain, founded in 1971 by the late Charley Watkins. Perhaps chief among them, though, was something personal. Barber’s father served in the military for 43 years. “Among all of our brands,” Barber says, “O’Charley’s has always embraced and been really supportive of the military.”

Barber adds that he hopes, despite what else might be stirring across the country, that Americans can agree on one thing: “That the people who serve in the military and make the sacrifice, including sometimes the ultimate sacrifice, really deserve our best honor and respect, and we feel like at O’Charley’s we’re able to do that and are pleased and honored to do so.”

Hiring and honoring military has been a day one thread in O’Charley’s business. It makes sense considering Watkins, who passed away in 2011 at the age of 87, was a veteran himself, having served 20 years in the U.S. Marine Corps as a pilot before retiring as a Major in 1963.

This past year, O’Charley’s raised more than $170,000 for The Folded Flag Foundation, which completed a three-year partnership with the non-profit. In total, O’Charley’s donated north of $390,000 to The Folded Flag, which helps families of fallen servicemen and servicewomen with financial support for transition and education. Guests who donated $5 on their checks were given a $5 O’Charley’s voucher.

Like usual, O’Charley’s completed the initiative around Veterans Day, where all active and retired military service members enjoy a free meal from the brand’s “Veterans Thank You Menu” on November 11 and 12. More than 114,000 veterans have come to dine at O’Charley’s in the past two years for the occasion, the company said.

Beyond the promotion and the three-year partnership, which cycles every term into something new, O’Charley’s provides a yearlong 10 percent discount to members of the military.

“It’s not just a one time, one shot for us,” Barber says. 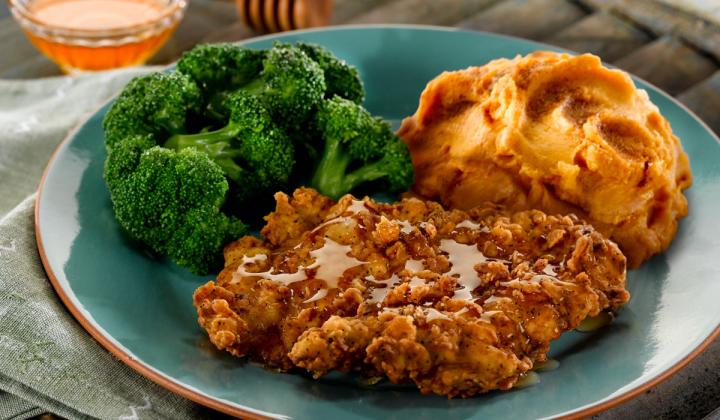 There is no specific initiative around hiring veterans at O’Charley’s, Barber adds, but there are not shortage of them working throughout the system, either. He believes that stems from the company’s values and atmosphere toward veterans. In other terms, O’Charley’s doesn’t need to seek veterans out—they come to the restaurant.

“I couldn’t tell you specifically how many veterans we have employed, but honestly we have a lot of veterans employed,” he says. “Our teams love that.”

Another angle of this is the fact that O’Charley’s isn’t typically found in dense urban markets. It’s a brand that serves as a destination in many of the smaller towns it operates in. Barber says a core element of O’Charley’s model is to embed into each community. Embracing and honoring veterans around the clock is part of that.

The famous Watkins quote, displayed on the wall, reads: “Everyone who walks through this door is a friend of mine.” Barber says they’ve used the notion to evolve O’Charley’s from the foundation up.

“That’s the spirit of it,” he says. “You embrace your community, be a friend to the community. Whether that’s military or the local football team. We make sure we’re connect to the communities in every restaurant.”

“As a brand we’re really small in comparison to a lot of brands that are out there,” Barber adds. “A big part of how we can connect and engage is to be involved in the community. And [the military initiative] is one of them. But it’s imperative that we know the high school football coach and the principal and director and police chief and fire chief, and we’re connected so that when things happen, we’re able to respond.”

Internally, O’Charley’s talks about culture and values as a “three-legged stool,” Barber says.

The shorthand boils down to people, profits, and personal fulfillment.

Barber says O’Charley’s talks about all of these targets frequently in training and makes sure to celebrate employees who personify those values. Local initiatives and other programs are showcased across the brand. Over time, Barber says, employees and operators who work in the O’Charley’s system come to see the commitment as second nature. They understand the case-by-case pushes, like The Folded Flag, as well as the overarching military commitment that’s a 365-day directive. “They see that,” Barber says of employees. “They see us not just talk about it, but actually live it out. So the authenticity of us not just saying we want to be part of the community to do good, but we actually do good, not just talk about doing good is what people see. And it’s the standard of leadership always to model out and be an example for what you expect other people to do.” 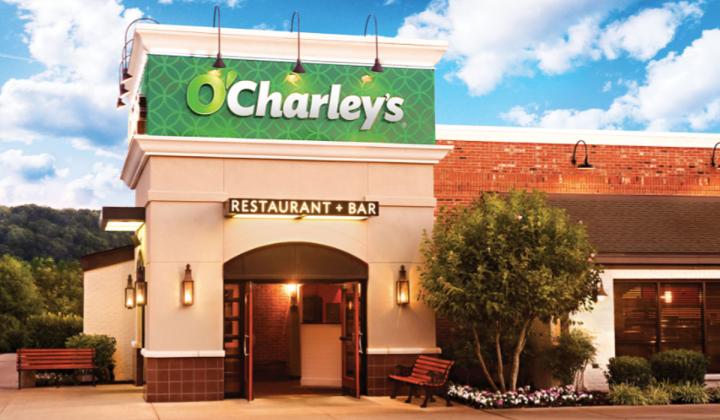 “I think our teams have done that consistently over the years and certainly intend to continue that.”

Barber says O’Charley’s is already planning for its next military initiative following The Folded Flag program. Previously, it hosted a Hometown Hero platform that recognized local veterans in individual communities.

After the $5 for $5 setup, O’Charley’s wants to see if it can find something more attractive, or perhaps something it can offer for a longer period. Maybe even a shorter period. All options are open, Barber says.

But regardless of where O’Charley’s lands, he says, the company wants to make sure it forcefully presents a message that has defined the brand since inception. “We’re always thinking about how to do better because it is so important and such a key part of the DNA and history of the brand,” Barber says. “We’re compelled to continue to elevate how we connect with people, and I’m looking forward to seeing what 2019 has in store.”