Fogo de Chão headed to the U.S. in 1997 after a recommendation from former President George H.W. Bush.

Off-premises, technology. Nothing has shaken the churrascaria's commitment to consumers.
June 2018 Danny Klein

There is no way to flip a red/green card on a take-out order. Brazilian-trained gaucho chefs aren’t available for in-home dinner parties. Yet, at its core, the off-premises movement into full-service is centered on capturing new occasions—guests and dayparts once absent before technology joined the conversation.

Larry Johnson, chief executive officer of 52-unit churrascaria Fogo de Chão, is taking a different approach to the off-premises boon than many sit-down brands, and that’s a reflection of what’s made the concept a hit since it landed on U.S. soil in 1997.

Instead of wondering about its food and how, when, and where it could travel best, Fogo looked at expanding times and ways in which guests could experience its concept, the way it was always meant to be.

Over the last couple of years, Fogo broadened its brand to offer brunch on the weekends. It opens Saturday and Sundays at 11 a.m. and goes until 11 p.m. It also rolled out a Bar Fogo menu a year ago to offer guests a chance to come in for a lighter-dining experience. There are small plates, like Braised Beef Rib Sliders and Brazilian Empanadas, and a Monday to Friday (4:30 to 6:30 p.m.) Happy Hour that offers $4 Brazilian Bites and Beers, $6 South American Wines, and $8 Brazilian Inspired Cocktails.

“We’ve taken a different approach in terms of making Fogo more available at different times, different price points, and different occasions,” says Johnson, who started as Fogo’s outside general counsel until he was named CEO in 2007. “For us, we think that works because when you look at profiles of Fogo guests, they want that experience. And we certainly deliver that experience well within the four walls.”

Fogo is looking at catering as a possible outlet. Johnson sees corporate events, weddings—anywhere where they can bring the Fogo experience to guests. “We want to keep that direct touch there,” he says. “Our guests love it and they love the interaction and participation.”

This all stems from a wave that has taken place internally over the last four of five years at Fogo, Johnson says. They’ve spent time with guests and focus groups to discover what matters most to loyal diners. Time and again the answer returned with similar overtones. But a kickback to the vibrant Fogo dining experience of all-you-eat prime meats served at your prompting, which started when brothers Jair and Arri Coser, along with Jorge and Aleico Ongaratto, opened their churrascaria in 1981 in Porto Alegre, Brazil, was that the experience itself, although beloved by hordes of guests, simply doesn’t appeal to everyone. Fogo wanted to erase the veto vote—a goal that’s only become more pressing as plant-forward and health-minded consumers flood the marketplace.

"What can we do to make the guest experience more efficient and enjoyable? That’s just something that we’re committed to." — Larry Johnson, Fogo de Chão CEO. 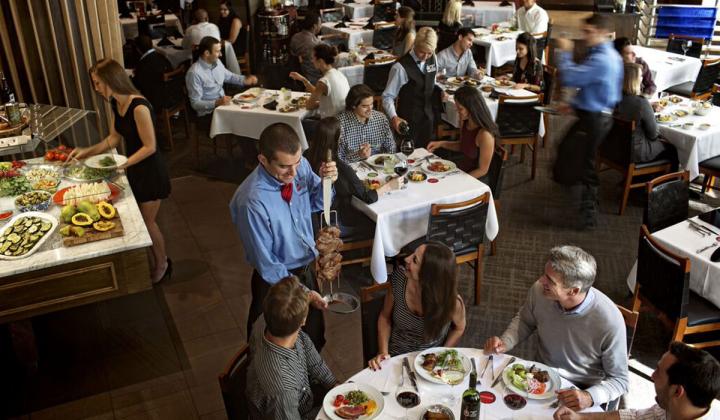 Fogo de Chão's commitment to customer experience has placed it atop customer surveys for top steakhouses.

One of the top requests Fogo received was to make it possible for diners to choose seafood instead of the meat-heavy options. Fogo responded with Mango Chilean Sea Bass, a Brazilian take on a South American classic served with homemade mango relish and malagueta pepper sauce. Chilled Lobster and Shrimp as an appetizer, Smoked Salmon on the Market Table, a Jumbo Shrimp Cocktail small plate, and Garlic Shrimp have joined the menu as well. You can order seafood towers.

“We’ve been successful at that and introducing those items. So we’re going to continue to look at that and the Market Table, where we are really focused on seasonal adaptation so that our guests who would prefer a vegetarian experience are able to focus on the Market Table and have that,” he says. “We’re very aware that we have a very wide demographic and we want to make sure that everybody feels welcomed and enjoys the experience.”

An example of that seasonal take is Fogo’s summer menu, which launched for its Weekday Lunch for $15 offerings. For $15, guests can eat at the Market Table and Feijoada Bar and get family-style service of Brazilian side dishes. For under $25, they can add a single selection of fire-roasted meat. This $15 summer menu added items like a Chickpea Salad, Watermelon Feta Salad, Heirloom Tomato & Mozzarella, and a Watermelon Fresca mocktail.

In line with Johnson’s earlier point, these kinds of innovations speak to Fogo’s overarching desire to bring its guests into its experience, not try to ship its experience to guests. That goal is guiding Fogo through multiple touchpoints. Technology wise, Fogo leverages a mobile app to allow guests to make reservations anywhere and anytime. The brand is on OpenTable. It’s also continually using technology to improve employee scheduling and is looking at possibly figuring handheld technology into the server experience.

These are changing times for Fogo. The brand originally headed to Dallas from Brazil based on a presidential recommendation. Former President George H.W. Bush dined at a São Paulo location and told the owners to open one in beef-crazed Texas. Two weeks later, the Coser brothers took the leap, without any other recommendations or market research.

In 2006, they sold a 35 percent stake to Brazilian investment fund GP Investments Co. Behind an $88 million IPO, the company went public in June 2015. And this past February, an all-cash deal valued at $560 million with Rhône Capital was announced to take the brand private again. Today, the company has right around 4,500 employees. There are units in Brazil, the U.S., Mexico, and the Middle East.

Rhône is a global alternative investment management firm with more than $5 billion in assets under management that focuses in “market-leading businesses with a pan-European or transatlantic presence and global growth opportunities.”

The global nature of both parties made this an ideal arrangement, Johnson says. 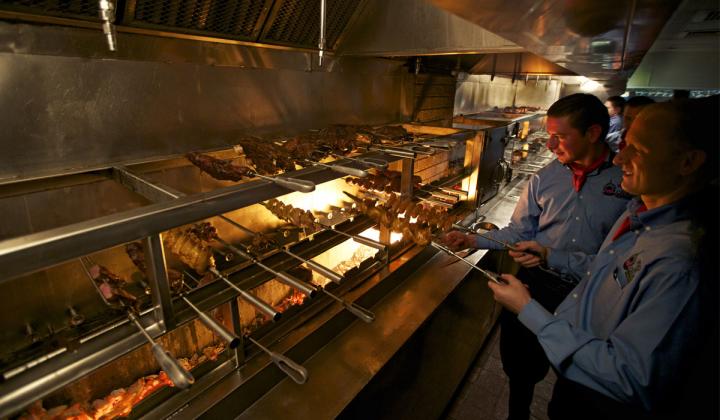 Fogo de Chão is a paradise for meat lovers, but the brand is also making sure it appeals to diners of all types.

“They understood our concept. And they appreciated what we have accomplished. They had the vision to see that we have a lot of white space ahead of us to continue to grow this concept properly,” he says.

In addition to Rhône’s global expertise, Johnson says they immediately noted the authenticity of Fogo, and how it separates the brand from other concepts. He says the company, which pushes average-unit volumes close to $8 million, is currently comfortable opening four to six units per year in the U.S. It’s realistic to eventually have at least 100 stateside restaurants, he adds. This is viewed through a combination of the top 50 metro areas in the U.S., where 25 of those can accommodate more than one Fogo. Metros like Dallas, Fort Worth, Houston, LA, Chicago, and New York are markets that can be penetrated further. However, there are still many metro areas that don’t have a Fogo where the company would look to expand, Johnson says.

What gives the brand confidence, he adds, is the fact Fogo has planted its flag across the map. “We’re on the East Coast, West Coast, center of the country, and in the South. We have in every part of the country where we’ve gone a very good reception,” he says.

In March, Fogo opened a flagship restaurant in Plano, Texas. It’s the first with an innovation test kitchen and seating that lets diners watch the meat being prepared and grilled to close. There are also premium dry-aged cuts served on Fridays and Saturdays.

This past year didn’t come without its challenges for Fogo. The brand was hit especially hard by hurricane activity in the third quarter, reporting consolidated comparable restaurant sales declines of 5.1 percent, with U.S. company-owned comps down 2.1 percent. But if you exclude the impact of hurricane activity during the quarter, U.S. sales decreased just 1.4 percent. Results in Brazil were soft as well. Company-owned comparable sales in Brazil plummeted 17.1 percent. This, also, was the result of extraneous factors. In this case, if you excluded the impact of the two Rio de Janeiro locations, comps actually rose 3 percent. These results included lapping last year’s Olympic Games and security issues in the city during the third quarter.

Johnson says Fogo “really learned how to maintain our focus,” during some of these setbacks.

“There are some things that occur that you have no control over,” he says. “There are economic issues and security issues that you don’t have much control over. And what we do is focus on what we can do and what we can control, and try and make sure every guest has a great experience when they’re with us.”

When Hurricane Harvey hit, Fogo donated $10 from every adult entrée purchased on September 4 to the Houston Food Bank in support of the Hurricane Harvey relief effort. Plus, it offered all first responders a free lunch or dinner in certain locations.

“When you’re dealing with things like the hurricanes, you make sure that you take care of your employees. Whether it’s making sure they have safety and shelter and food and water, things like that. But it just causes you to step back and say OK, whatever we’re going to do we’re going to do it at the highest level. Be mindful of our people. Be mindful of our guests,” Johnson says.