The chain believes it can open 75-100 restaurants in the years to come.

Outback didn’t need the pandemic to realize the importance of a new prototype.

Ideation on a new store design began in 2019. Brand President Brett Patterson explains that as Outback thought about future growth, it wanted to make sure it had a more streamlined vessel that could resonate in smaller markets—that was the big growth opportunity in the next five to 10 years.

The result is a nearly 5,000-square-foot NextGen design, down from the roughly 6,000-square-foot size of typical Outback restaurants. The reduction was accomplished by redesigning the kitchen and optimizing the dining room, without impacting the number of tables. The prototype sits roughly 187 guests.

Thus far four have opened in Steele Creek, North Carolina; Madison, Alabama; Forth Worth, Texas; and Polaris, Ohio. Outback believes it has room to open 75-100 of these in the coming years. The chain ended Q1 with 692 U.S. outlets (562 company-owned and 130 franchised).

“The one thing about these four restaurants, it's really putting our best foot forward to what the future will look like for Outback,” Patterson says.

Although the journey began pre-COVID, the pandemic did have its influences, most notably a room dedicated to off-premises orders tacked on to the side of the building. Patterson notes Outback has had a “pretty robust” off-premises business for a number of years and that curbside takeaway has been in place since the early 90s. But it was never to the point of a specific section being needed inside the store.

The move makes sense, considering off-premises mixed 26 percent Q1, which is more than double pre-pandemic levels. Of that amount, 12 percent comes from third-party delivery. Almost 80 percent of off-premises sales in the first quarter came via digital channels, fueled by a new online ordering system and mobile app that has more than 1.8 million downloads.

The off-premises room will allow for more volume through the curbside pickup side door and reduce interference with day-to-day operations, Patterson says.

“In our legacy locations, where they were all designed for what we know to be traditional casual-dining restaurants and full sit-down restaurants, you handle takeout through the bartender, like any other concept, or we would have that side door access with the curbside. But your kitchen layout was still the same, your dining room layout was the same, and you had a little area carved out for that off-premise piece. So it's considerably different now with that that [dedicated] space." 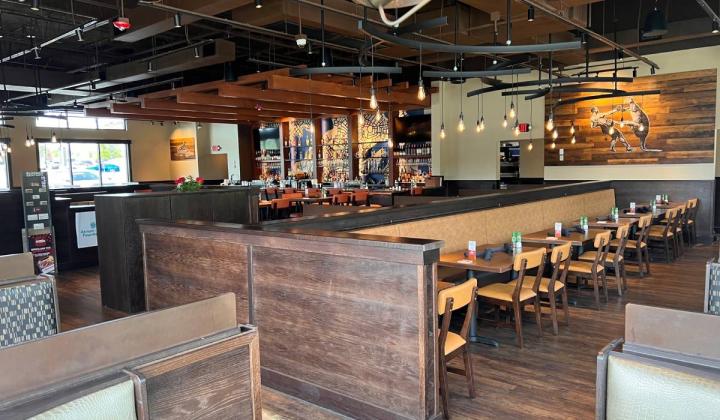 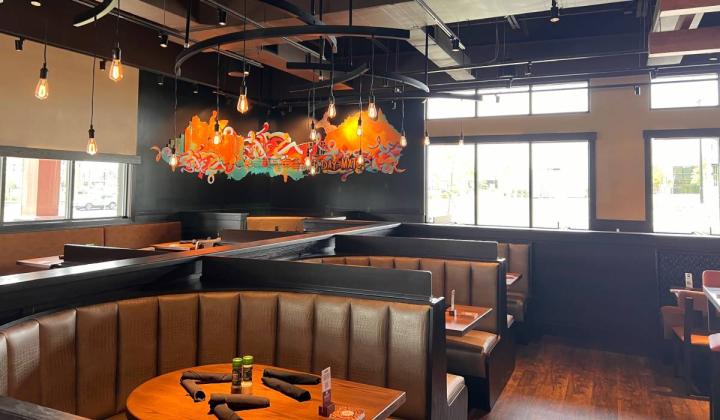 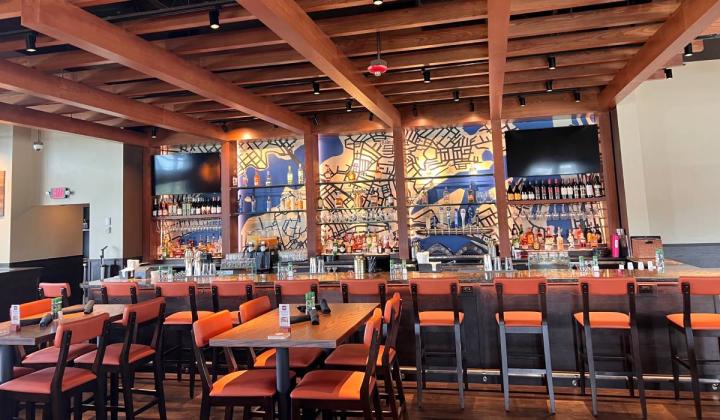 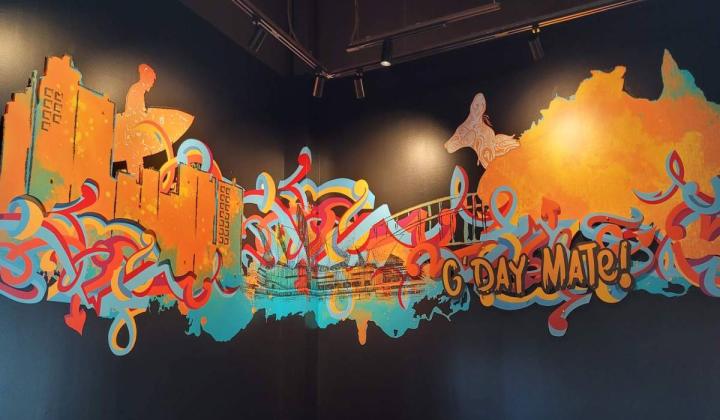 Patterson’s heard glowing reviews from managers and hourly employees. In the front of house, one is able to see every table from any point in the restaurant. The prototype also leverages a team service model in which servers use tablets to take orders instead of moving back and forth to a POS terminal.

The system requires fewer bodies, meaning one person is able to handle up to six tables, instead of three to four. That also means more tips and better recruitment and retention pitches in a tighter labor market. Front-of-house team members have new apparel, as well.

In the back of house, the NextGen design has all of Outback’s new cooking technology, including clamshell grills, a combi oven, and a kitchen display system.

For consumers, the interior is reimagined to be “vibrant, fun, and inviting,” including a chandelier that looks like the Southern Cross constellation and a graffiti mural inspired by Australian surf culture and the Sydney Harbor Bridge—the largest steel arch bridge in the world.

The new restaurants also feature artwork specific to their market, fulfilling Outback’s goal to set itself apart from the typical chain restaurant and be a fabric of the community.

“I will tell you from a consumer standpoint, we're just getting rave reviews again because folks have been part of our journey for 34 years, right?” Patterson says. “They've got a lot of brand awareness, they've got reverence for the brand, and so I think they get excited when they see what the future of Outback looks like.”

Culinary changes were implemented, as well, with a more steak-forward menu. For instance, there’s the Smoked Porterhouse, which is a steak infused with hickory smoke served on a wood platter with a dome overtop. Brussel sprouts were also added to the menu.

“There’s some items on the menu that are really more forward and where we're thinking we're going with the menu,” Patterson says.

Each of the four new stores, which cost 20 percent less to construct, were ground-up builds and freestanding. In the future, Outback will work on a prototype specifically for an inline location. Patterson isn’t able to be overly specific about the length of time it takes to open a prototype because of the noise surrounding supply chain, but there’s confidence that Outback can shed two to three weeks off the timeline as compared to a legacy unit.

The brand believes the prototype will work in any area, but the key to reaching its 75-100 goal will be entering secondary markets. Most of the expansion will come in the South where the chain has the most brand awareness, including states like South Carolina, North Carolina, Florida, Georgia, and Texas.

The steakhouse will continue to open larger units that are already in the pipeline, but after that, the slimmer prototype will be the primary growth driver. At the same time, the chain is in the midst of a remodel program and will implement some of the latest elements into its legacy stores.

“Just now emerging from the pandemic and things have slowed down, but yeah, we we are aggressively pursuing that goal to get 75-100 additional restaurants,” Patterson says.