The eatertainment chain is experimenting with automated checkout technology that's been popularly championed by Amazon.

Dave & Buster’s has been trying to solve an age-old problem unique to its eatertainment segment—how to increase food and beverage attachment for customers whose sole objective is to come in and just play games.

And there are a lot of those guests. In the chain’s Q2, the company earned $311.4 million in amusements, good for a 66.5 percent mix of overall revenue. That’s an increase from 60 percent versus pre-COVID comparisons. At the same time, Dave & Buster’s has made a concerted effort to improve its food and beverage offerings. In 2021, the company rebranded its menu under the label of “Inspired American Kitchen" and cut its choices to 28, a 33 percent decrease from before the pandemic. During the summer, the brand rolled out limited-time offers, such as a Spicy Taco Burger, Cinnamon Toast Crunch Fried Ice Cream, Spiked Black Cherry Limeade, and Blood Orange Paloma.

For consumers that remain focused on entertainment, Dave & Buster’s continued to kick around ideas. One suggestion was a mobile cart filled with drinks and beverages that could move throughout the venue. However, Coca-Cola—the chain’s nonalcoholic beverage partner—had a better idea.

“I was like, ‘No, no, no, we need to have a micro market,’” says Rachel Chahal, Coca-Cola’s director of amusement/eatertainment partnerships.

Chahal is referring to the growing popularity of automated checkout technology, made famous by cashierless Amazon Go convenience stores. Customers link their credit card and open the gated entrance by scanning a QR code. Guests can pick up or put down anything without being charged, similar to an online shopping cart. When consumers walk out, their credit card is automatically charged.

Dave & Buster’s Game & Go market is powered by Zippin, a checkout-free platform solution that claims to increase sales per square foot by 10-50 percent, save 140,000 hours of standing in line, and decrease labor costs by 5-20 percent. The company has inserted its technology in athletic venues and airports across the country, including Mile High Stadium in Denver and the Barclays Center in Brooklyn. The market was designed by The Central Group, a firm providing expertise in maximizing retail spaces.

“We have seen it work so well in stadiums. Dave & Buster’s investment is different than the stadium, so picking the learnings that we got from the stadiums and moving people quickly through an experience,” Chahal says. “And as technologically forward as Dave & Buster’s is in their games, we thought this would fit in perfectly in the [Dave & Buster's] midway to be able to have games butted up against it and it not be a game, but it would lend itself perfectly to that environment because it looks cool and high-tech in the middle of all of these.” 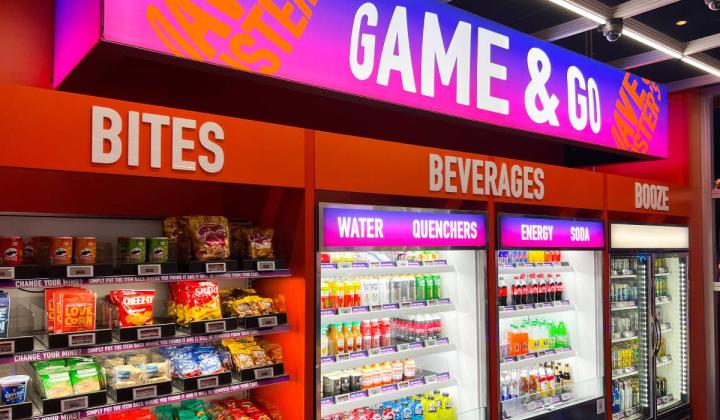 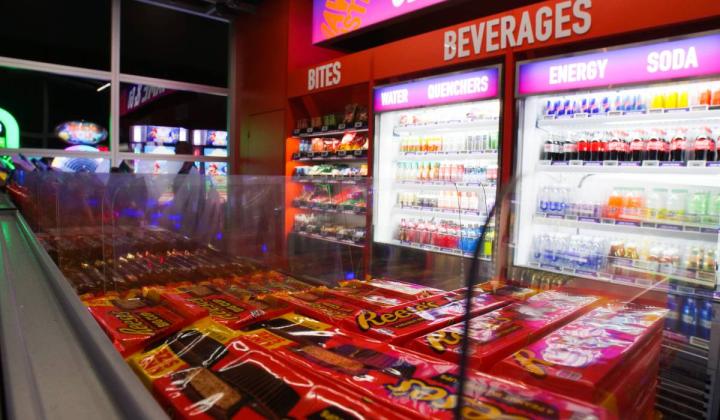 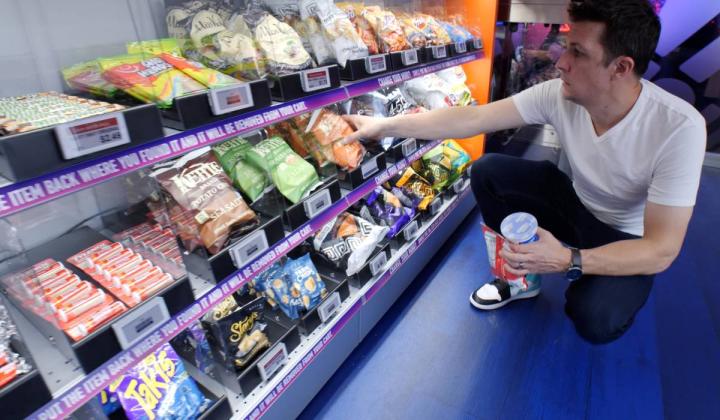 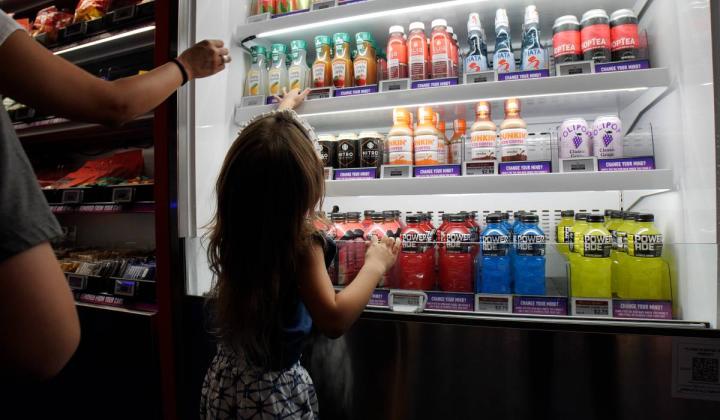 The Game & Go store is based in the midway section of the Dave & Buster’s in Hollwyood, Florida, near all the gaming activity. The market includes snacks (candy, Rice Krispies Treats, Pop Tart bites, Pringles, Frito-Lay products, popcorn, beef jerky); nonalcoholic beverages (Sprite, Smart Water, Coca-Cola, Dasani, etc.), and beer and wine. When alcohol is available, the micro market has someone serving the beverages and monitoring IDs—other than that, the store is unattended. It takes up fewer than 300 square feet of the massive, 58,000-square-foot location.

“If it's successful there, it'll be successful in any market,” says Chahal, discussing how Coca-Cola and Dave & Buster’s chose its first pilot restaurant. “They have a very diverse customer base there and that's one of the reasons it's very high traffic. It is very multicultural and it's a little bit of a tourist area in Hollywood Florida. This needed a good location to do the test and the GM is amazing.”

Chahal says there was little issue finding room for the Game & Go store. There’s heavy electricity and HVAC infrastructure in the area already because of the games, so it was simply a matter of moving some power around different panels. Also, all the games are mobile, so they were easily moved, as well. The micro market, running since this summer, was installed overnight and the structure went up in one day. Implementation of the token-detecting camera system happened next, so in total, everything was good to go in a matter of days.

“I think the biggest learnings are that first of all, customers love it,” Chahal says. “And second of all, it's performing the task that we wanted it to. So we designed it for people who are coming into the game to pick up something, and they are doing it. … We had big concerns [about cannibalization]. That's why we're doing the test, but so far we've had zero cannibalization.”

Dave & Buster’s and Coca-Cola are in the midst of analyzing top-selling items and what’s being sold together. Through a few months, nonalcoholic beverages appear to the most popular. After that evaluation is completed, the biggest question becomes size, Chahal says. Those must be answered before the Game & Go store enters another venue.

The innovation comes at a time of great fortune for Dave & Buster’s. The company earned a record $468.4 million in revenue and $119.6 million in adjusted EBITDA in the second quarter compared to 2019. That's hanks to the addition of Main Event, a fellow eatertainment chain it purchased for $835 million. Through Q3 thus far, same-store sales are growing 17.6 percent and walk-in sales are increasing 20 percent. Special event business is declining 11.9 percent, but that’s a stark improvement from the 23.1 percent drop in Q2.

The Game & Go store is yet another sign of Dave & Buster’s trajectory, Chahal says.

“Well I think similar to some of the other things that Dave & Buster’s has done with their virtual kitchens and making other revenue streams besides just what happens in the restaurant, I think this is another way of them looking to the future of how to capture as many guests as possible and make a unique experience so you want to come in and see something new," Chahal says.