Loyalty and Longevity Win the Race for The Greene Turtle

Thriving retail, proprietary offerings, and best-in-class loyalty keep the classic bar and grill ahead of the pack.
October 2018 Danny Klein

Put a mobile device or tablet in every consumer’s hands and what happens to the sports bars and grills that once thrived in America’s dining scene? “The times have changed,” says Bob Barry, president and CEO of 47-unit legacy brand The Greene Turtle, “which means we have to change as well.”

The Greene Turtle debuted 1976 in Ocean City, Maryland. It has since expanded into Washington, D.C., West Virginia, Delaware, Pennsylvania, New Jersey, and Long Island, New York. In its six 2017 openings, New Jersey and Pennsylvania were fresh markets. There are deals in place to add 13 more with its Philadelphia franchisee, The Integritty Group, and 10 additional restaurants in North Jersey (a separate deal covers the rest of the Garden State). Of the 47 current stores, 12 are company run.

But like many casual brands, The Greene Turtle, which posted total company sales of $125 million on $2.74 million average-unit volumes last year, is slowing its growth from a steady pace of 4–5 restaurants per year over the past five. This calendar it expects to open two and the same is likely true of 2019.

Beyond the headwinds facing sit-down chains in general, Barry says, The Greene Turtle is grappling with challenges unique to this sector. The kinds of setbacks that stymied Buffalo Wild Wing’s growth, and have led peers to reimagine what the sports bar-grill category really looks like.

Kevin Moll, president of Denver, Colorado-based Restaurant Consulting Services, recently told FSR that, to develop its competitive edge, every sports bar has to conduct “specific market research of what they can offer that other eateries don’t.” Gary Stibel, founder and CEO of Westport, Connecticut-based New England Consulting Group, added, “If you’re not innovating, you’re old news,” and said sports bars need to introduce new “sauces or beers” or lose their customers, he says.

That sums The Greene Turtle’s refreshed direction in a nutshell.

No more freezer to the fryer to the plate. Easy and local flair with an emphasis on Maryland items (crab cakes). A fresh look and feel. Proprietary items that turn The Greene Turtle into a food-and-beverage destination. And a deep focus on loyalty and what that means in today’s industry. 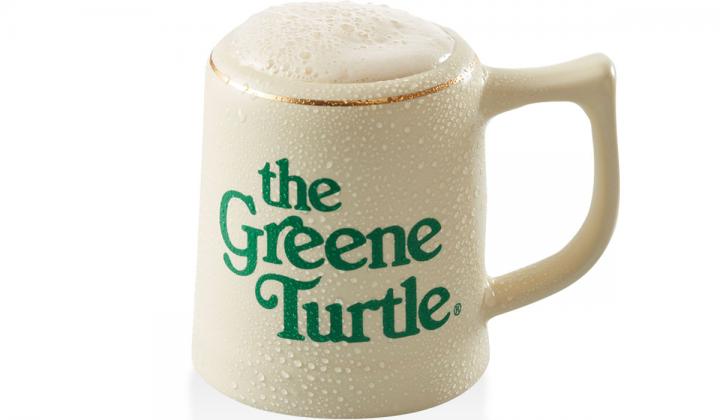 Let’s start with perhaps the most classic of The Greene Turtle’s programs—its Mug Club. For $40, customers receive $1 off every draft and special privileges at each location. They also have access to monthly member-only Mug Club events and can earn rewards points through the typical platform.

In a landscape where repeat guests are currency, this setup has proven invaluable to The Greene Turtle’s business. It doesn’t just encourage visits, it promotes camaraderie and offers VIP status that crosses state lines.

At the member-only events, Mug Club users interact and treat The Greene Turtle like a neighborhood pub. Once a restaurant has that sort of in with customers, the rest of the dayparts and occasions open up. The $1 off tag doesn’t hurt, either, when guests are pulling straws for dining choices each night—with or without their friends and family in tow. And it’s far from uncommon for friends to recruit buddies to join the Mug Club, since they would be hanging out otherwise anyway.

In order to keep this program flowing, Barry says, The Greene Turtle carries what it calls “guest mugs” at each store to let members enjoy the privileges and locations no matter where they’re dining. This is especially effective for traveling and corporate guests. Many members have mugs in multiple locations as well.

The Turtle Rewards program offers a point for every dollar spent to exclusive member offers, and annual birthday rewards, as well as bonus points for registering. The Greene Turtle pulses a double points on Tuesday deal that is a stellar traffic driver for an otherwise slow section of the week.

But The Mug Club remains a proven and powerful loyalty driver, Barry says, and it continues to evolve as The Greene Turtle does.

Here’s an example of how. Forget just the discounts, The Greene Turtle understands there’s more to reeling in faithful customers than straight promotions. 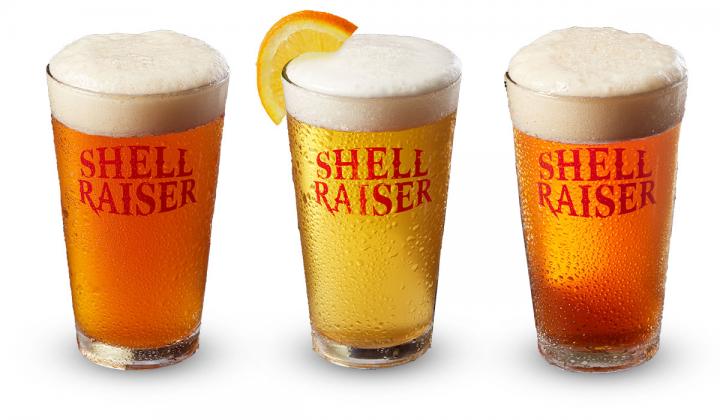 About three years ago, The Greene Turtle’s first proprietary Shell Raiser beer hit taps systemwide. It started with a Baltimore-brewed Pale Ale made with a blend of English and American hops that pours a golden amber and finishes sweet at 4.75 percent ABV. The medium carbonation and sessionable nature is by design. It pairs well with snackable bites like tacos and wraps, and can be ordered multiple times throughout a game without filling or knocking over a guest.

Next came The Greene Turtle’s Shell Raiser IPA, a blend of Amarillo, Azacca, Columbus, and Hallertau Blanc hops that stirs a bitter, yet nectar-like citrus flavor with subtle floral notes. It’s a heartier beer than the pale ale at 7.2 percent ABV, and is balanced with a malt backbone of Pilsner Malt, Biscuit Malt, and Golden Naked Oats.

The most recent addition was a Belgian style Wit Shell Raiser Orange. Gold and slightly hazy, it combines summit hops with a classic Wit malt build comprised of Pale Wheat, 2-Row Pale, and Carafoam to create a crisp, clean, refreshing malt forward beer. Coriander and orange are added with a tweak of mandarin oranges to pour a 4.9 percent offering.

The Green Turtle typically offers 24 tap handles at each location and the Shell Raiser line is making up about 20 percent of its total beer sales. That might not seem significant, but it’s a solid ratio, Barry says. And it’s a steady draw for consumers who simply can’t buy the options elsewhere.

In addition to beer, The Greene Turtle features Boardwalk Lemonades in mason jars and other drinks that bring out its Maryland vibe. In markets outside of Maryland, Barry says, customers get a clear sense of what The Greene Turtle stands for as well as where it comes from, and that makes it pop among a sea of options.

On that note, The Greene Turtle is doing all it can to avoid another one of Moll’s pitfalls: “Are they a bar that serves food, or do they specialize in alcohol? Is it a place to drink and watch sports or a place to get a meal?”

In other words, do sports bars truly know what they stand for?

The Greene Turtle’s isn’t having an identity crisis.

Consider its retail presence. The company sold more than 250,000 shirts last year systemwide. How many restaurant chains in America have two retail stores that don’t sell food or even want to? The store on 116th Street and Coastal Highway in Ocean City has been open 25 years. A 6th Street and Boardwalk location has stood for more than a decade.

“When I talk to people, whether it’s investors or franchisees, I always ask the question, ‘When’s the last time you’ve seen someone walking around with a Buffalo Wild Wings T-shirt, or an Applebee’s or a Chili’s?” Barry says. “That is definitely a uniqueness to the brand, and the loyalty and the fans of the brand that are willing to pay you to wear your logo.”

The 116th location is two doors down from a restaurant. And every unit features a retail section side near the hostess stand, selling shirts, hats, merchandise, and more, to fuel the synergy of the product and the in-store food offerings. Not to mention walking advertising that guests actually pay for.

While it is clear The Greene Turtle doesn’t suffer from any shortage of brand recognition, how does that reverence mature past fondness and into foot traffic?

The Greene Turtle is tackling the task from a few directions.

From a physical one, the brand has changed the look and feel of units to reflect the shift in its business. Less TVs. Brighter spaces. Subtle changes that don’t alienate the loyal guests. One being, for instance, a Pennsylvania restaurant where The Greene Turtle toned down décor a bit and instead highlighted some local pieces. Drawings on the wall of famous athletes who came out of the city, like Reggie White and Julius Erving.

And while sports remain a big part of the experience, the TVs are used for additional guest interactions, like trivia or market messaging, and interaction with mobile applications.

This past August, the chain launched online ordering to provide more convenience and a stronger connection to the families that are a mainstay of The Greene Turtle’s client base as well as younger, on-the-go customers.

In the past 24 months, Barry says, to-go business has increased 100 percent. Delivery is up 25 percent in just the past 60 days. What does this indicate, exactly? That’s something The Greene Turtle is still figuring out.

“We’re seeing a huge uptick,” Barry says. “Now, we’re not sure if that’s incremental or if that’s replacement. It’s too early to tell, but we’re going to keep a close eye on that.”

The logistics are a work in progress as well. “We’re constantly looking to make adjustments on what the best product is. Because regardless you still want to deliver a great product and a great experience, each and every time.”

“You’ve got to make sure you understand the product, if it’s in a delivery vehicle it can be a second or third delivery. It needs to be made so it might be in there for 20–30 minutes, and how does it perform after that? We’re constantly working on that and trying to get better at that.”

From a culinary angle, The Greene Turtle cranked up its authentic approach. It featured “Ocean City Originals” this summer to showcase The Greene Turtle’s mid-Atlantic heritage. And, interestingly enough, this menu excluded Ocean City locations. One item was a Chesapeake Burger or chicken sandwich seasoned with Old Bay and topped with The Greene Turtle’s Crab Dip, smoked bacon, and American cheese, for $9.99.

In August, The Greene Turtle launched a new menu with build-your-own lunch options starting at $7.99 that allowed diners to pick an entrée, side, and extra, like a salad or more meat. Other additions to the menu included Crab Pizza, Rockfish Bites (rockfish fried crisp in a Yuengling beer batter and seasoned with Old Bay), and even Vitamin Water as a drink option.

As the moves reflect, The Greene Turtle is going all-in across the board at, well, being The Greene Turtle. That’s how the brand believes it can progress through this recent lull in restaurant performance and come out stronger on the other side.

Barry believes the economy will swing back and so will The Greene Turtle’s growth, with the Carolinas as the next possible landing spot.

“We’re just kind of waiting,” Barry says. “It will bounce back. I’m pretty confident in that.”