Founder Kent Taylor passed away in March at the age of 65.

Kent Taylor’s Legacy Ever Present as Texas Roadhouse Surges Ahead

The steakhouse chain's sales are skyrocketing as COVID recovery continues.

Texas Roadhouse lost founder Kent Taylor on March 18, a year to the day from when the enigmatic executive gave up his base salary and incentive bonus to aid frontline employees. Taylor took his own life following a struggle with post-COVID-19 symptoms, including “severe tinnitus,” a condition defined as a ringing in the ears with no external source. He was 65.

Before passing, Taylor committed to fund a clinical study to help members of the military who also grapple with the ailment. His family said Taylor left “an unmatched legacy as a people-first leader, which is why he often said that Texas Roadhouse was a people company that just happened to serve steaks.”

Jerry Morgan, a 23-year company vet who started as managing partner of the brand’s first Texas restaurant, stepped in. He was promoted to president only that previous December.

In the company’s first update since Taylor’s passing, Morgan said Texas Roadhouse is hurting and healing, “but we’re strong to the core.”

Morgan mused the company’s sales spike in March was Taylor’s doing. “'We’re so grateful to all of our guests who kind of, I believe, kind of came in to pay their respects to Kent and everything that he's done and meant to Texas Roadhouse.”

With restrictions softening, vaccines accelerating, and stimulus checks hitting wallets, customers rushed back to Texas Roadhouse. There were stores in March and April, CFO Tonya Robinson said, serving 8,000 to 10,000 guests per week. Average weekly sales clocked in at just over $114,000 in Q1—a 13-week period that ended March 30.

Same-store sales in Q1 rose 18.5 percent, year-over-year, as Texas Roadhouse lapped the beginning of COVID. Yet pulled back, the brand is still running 8.6 percent higher than 2019.

And similar to other sit-down chains, figures have skyrocketed off the COVID floor in April.

In the years leading up to COVID, Texas Roadhouse often battled with rising labor costs and wage pressures. But it was a calling card of Taylor’s operating philosophy to stand firm. The brand was going to front costs in favor of fully staffing restaurants.

And the same challenge now faces Morgan, but with a pandemic slant. As the economy reopens and expands, Texas Roadhouse is finding it more difficult to land employees than ever, Morgan said. Meanwhile, wage increases continue, which led the brand to take a 1.75 percent menu price increase this week to offset some of the challenges.

But the staffing dynamic today is unlike any Taylor saw Texas Roadhouse through. The brand is getting plenty of applicants, Morgan said, “but not everybody is really motivated to get a job.”

And so it’s getting a lot of no-shows. Turnover is actually lower than it’s historically been at Texas Roadhouse. The concern is operators are aggressively recruiting and setting up interviews, and people aren’t showing up.

“Which is really unusual,” Morgan said. “And maybe that’s because of the payments that they have.”

Morgan is referencing the $300 weekly unemployment boost extended through the beginning of September in President Joe Biden’s $1.9 trillion American Rescue Plan. And this commonly held restaurant notion employees can make more, or similar amounts, at home as they can showing up to work.

“The money is coming to them a little easy, just my opinion, but that's where our concern is,” Morgan said.

However, once people sign up at Texas Roadhouse, they’re making good money, Morgan said. “We're keeping them very busy. There's no doubt about that and they like that side of it,” he said. “We just have a lot of no-shows from the applicant standpoint. So, we're having to be a little more aggressive on the hiring and training. And then, obviously we treat people and take great care of them.”

READ MORE: Is the Restaurant Industry Facing a Hiring Crisis?

Staffing challenges are coming from every direction—cooks, servers, etc. Still, Texas Roadhouse is nearly back to 2019 levels, Morgan said. Although it’s worth remembering that climate wasn’t an easy one, either. This is a challenge exacerbated, twisted, and heightened by COVID conditions—not necessarily created by it.

At the beginning of 2020, only 13 percent of limited-service restaurant companies reported being fully staffed in hourly, non-management positions, according to Black Box Intelligence. Full-service brands fared slightly better at 38 percent.

And a year ago, just 10 percent of full-service restaurant companies reported their kitchens to be fully staffed.

“We're almost back there. But we're attacking it. I will just say that. And I have said that whoever is going to win this year is going to win the battle of the people compared to what the challenges that we had to learn how to pivot in 2020 and adjust our business,” Morgan said. “This year, I think it is going to be the restaurant chains that can get people and supply the guest with a great experience as they start to come back more and more. And we're excited about our sales … our guests are pretty loyal, and they are absolutely excited to get back in the building. And we've just got to continue to beef up the staffing and be able to provide a great experience for them.” 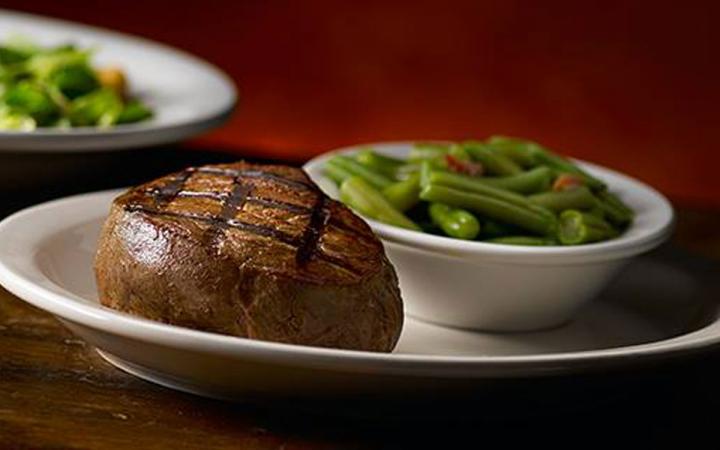 “We have a heck of a family here at the Roadhouse,” CEO Jerry Morgan said. “And we're very excited to continue to show, respect, and love to a man that gave us so much and gave so much to the world and to the industry.”

Texas Roadhouse’s Q1 same-store sales result of 18.5 percent comprised of 13 percent traffic and 5.5 percent average check. The company took about 5 percent pricing from 2019 to 2021, and it’s varied a bit market-to-market based on wage rates.

Although Taylor famously bucked third-party delivery over the years, the brand hasn’t shied from off-premises during this past year-plus. Just similar to Darden, Texas Roadhouse diverted attention to carryout and curbside over aggregator partnerships—experiences it can control closer and believes mirrors the in-store experience better.

Texas Roadhouse has maintained elevated levels of to-go sales regardless of the restaurant’s dining room capacity in recent weeks, Robinson said. Systemwide, to-go pushed more than $23,000 per week in Q1, or 18.7 percent of total sales.

Naturally, this is a lead reason why Texas Roadhouse accelerated on a two-year stack, despite capacity realties. If you go back to the week ending March 10, 2020, units averaged just $8,741 in weekly to-go business.

What’s happening today is the percentage of overall sales is coming down, but the per-week figure is sticking in that $24,000–$25,000 range. And if you look at units with 70–75 percent capacity, the numbers aren’t much different from those at 50 percent.

“So they're holding on to it. They're finding ways to do it,” Robinson said.

Additionally, Texas Roadhouse’s digital versus call-in business is shifting. Last quarter, it was basically split down the middle. Now, digital has inched closer to 55 percent.

The brand rolled an app upgrade, which makes it easier to order and pay for to-go, get on a waitlist, and use offers and gift cards for pickup,

Texas Roadhouse also moved the needle with logistical changes. It implemented pickup windows in some stores and tested “a couple” of drive-up windows (not drive-thru) where customers can text, stay in their car, and grab food from the hand-off point. “We're very happy with the pickup windows and we're excited to see what this drive-up window does for us,” Morgan said. “If it really makes it convenient for the guest and we can really get into that game then maybe we go back and look at some stores that we might be able to retro in and see if that works.”

It’s not just to-go lifting business. Texas Roadhouse has witnessed an increase in weekday demand across all hours. There’s been a benefit with shoulder periods. There are 200 or so restaurants opening earlier than before—3 versus 4 p.m. Guests are showing up earlier, perhaps to avoid crowds.

“You're seeing guests trading up to higher priced steaks and items entrees on the menu, bigger steaks,” Robinson added. “You see that alcohol mix coming back into play as the dining rooms reopen, all those things really playing into what's driving a lot of that sales momentum that we saw in March and April.”

Another element Texas Roadhouse finds intriguing, Morgan said, is how to pay at the table. “And if we can get that deal done, then I think that really does enhance the speed of the experience,” he said.

“From that speed side, I don't know that we'll ever get away from our philosophy of legendary service being anything more than tables,” Morgan said. “And I don't know that we will have a kiosk or ziosk or whatever to replace a smiling face engaged in your level of service. But … we need to work on our pay-at-the-table plan and get more people to utilize that and see what technology will help us in that particular part of the experience.”

One of the big learnings over the past year, expressed by Robinson, sounds like Taylor-speak to a tee. She said the company’s upside today, as is the case throughout full service, is the mix of dining-room sales jolted by pent-up demand, coupled with elevated to-go. “The one thing that we continue to take away, though, is not to make changes that put legendary food, legendary service at risk,” Robinson said. “And it's really easy to want to do that to cut something to get that profitability. But we look at it as that long-term investment, as we've talked about it a lot over the years. We're going to stay true to that.”

Morgan said the “entrepreneurial spirit in this company is strong.” Texas Roadhouse runs on an operating model similar to the one Outback got started on. Operators put up $25,000 (the first forked up $30,000 because Taylor was low on startup cash) and get 10 percent of the store’s profits.

“We learned that a lot from Kent,” Morgan said. “He gave us the freedom to be owners and operators and partners. He listened, he asked, we collaborate, we talk to each other. We help each other to find solutions.”

“We have a heck of a family here at the Roadhouse,” he added later. “And we're very excited to continue to show, respect, and love to a man that gave us so much and gave so much to the world and to the industry.”