Johnny Rockets is Going Where the Experiences Are

The legacy burger brand is taking a nontraditional route to growth.

Nobody is going to accuse Johnny Rockets of having an identity crisis. The chain’s 1950s diner-style décor, smiley face ketchup plates, and, in select locations, employees who sing and dance on the half hour, have kept it from fading into the burger background for three-plus decades.

But the 341-unit brand has realized something else in recent years. Its experiential strengths lie in site selection. And that’s the emphasis behind what CEO George Michel referred to as a renewed focus on growth in 2020.

Namely, Johnny Rockets wants to target places it can complete an experience for guests, not serve as the entire show. Nontraditional outlets, like casinos, theme parks, airports, and cruise ships—dynamic venues that have proven lucrative to date.

Of the 12 venue types in Johnny Rockets’ footprint, the highest average-unit volume store sits at one of its 18 casino franchises. That restaurant tops at $5.743 million, according to a recent franchise disclosure document. The company’s AUV systemwide (domestic franchises) is $1.228 million.

That’s only going to deepen, says Michel, who took over for Mike Nolan in August. “We don’t see ourselves as being on the street with freestanding restaurants with a drive-thru window,” he says. 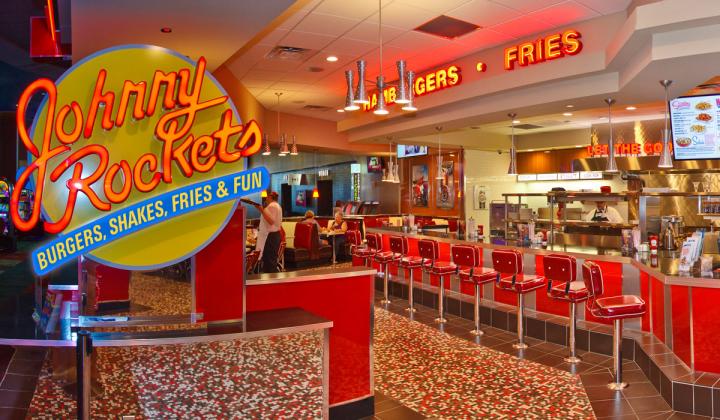 Casino units, like this River Spirit location in Tulsa, Oklahoma, are among the highest-performing in Johnny Rockets' system.

For Michel, helming Johnny Rockets is a nostalgic turn. The former Boston Market CEO, who also leads Friendly’s (a Sun Capital-owned chain as well), started his career at A&W Restaurants as a cook when he was 17. He rose to chief executive and also held roles at Burger King, overseeing operations in the Middle East, Asia, and Canada, and Brinker International as chief operating officer, global markets. Michel directed Boston Market for eight years before retiring in May 2018. It’s a career that stretches nearly 50 years.

Much of Johnny Rockets’ growth in 2019 occurred internationally. It opened 16 locations outside the U.S. to up its total to 178 in 26 countries. The chain debuted new-market stores in Spain and Oman.

Stateside, Johnny Rockets opened net 10 restaurants in 2016 before retracting by 17 and eight locations, respectively, in the ensuing years.

Michel says reigniting domestic expansion boils down to the nontraditional angle. Of Johnny Rockets’ 341 restaurants, about half are counter service. It’s built a model over the years agile enough to fit into a variety of real-estate opportunities. Yet Johnny Rockets succeeds most, to Michel’s point, when customers are already chasing experiences.

“The experience is very important and the fact that you’re in a casino,” Michel says, “you don’t just want to go into a restaurant that serves food. You want to add to the experience. That’s where Johnny Rockets comes in and completes the experience.” 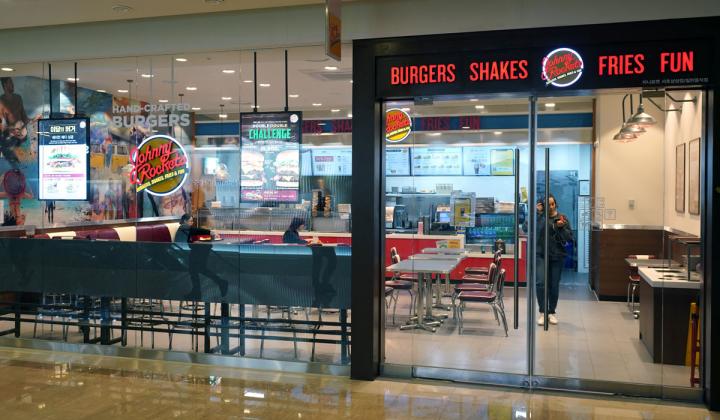 Nontraditional growth is going to define Johnny Rockets' growth in 2020 and beyond.

Johnny Rockets’ airport locations are spread globally, from Warsaw, Poland, to Ecuador to Mexico, to Syracuse, New York. Michel says Johnny Rockets’ Americana vibe caters to international audiences because it's visually and instantly recognizable. It’s a setup that shouts burgers and malts. Domestically, it works from a different angle, Michel says. In those cases, it’s about credibility.

Michel says Johnny Rockets wants to engage with the big feeders, like HMSHost, and other airport developers this coming year “to let them know that Johnny Rockets is a brand they should consider seriously.”

Either way, it’s found a comfortable niche between convenience-fueled quick-serves and high-dollar fine-dining spots. The cooked-to-order element (Johnny Rockets scoops ice creams for its shakes, no premix poured into a machine), results in some longer wait times. But Michel says customers don’t mind the 5- to 7-minute cook times. “They know it’s coming fresh from the griddle,” he says. “That’s why our kitchens are open kitchens. It’s not like we have microwaves. It’s not like we have holding equipment to heat chicken and meat.”

“These are the things that make us unique and customers don’t mind waiting because they know they’re getting something different,” Michel adds.

Call it a balance of demand. Johnny Rockets isn’t going to compete with Burger King or McDonald’s, Michel says. Or $1 choices. That’s not to say there’s nothing wrong with speaking to those occasions as a restaurant, Michel says, it’s simply not the category Johnny Rockets believes it can stand out in. And, again, this is why nontraditional, experience-forward venues fit the growth bill.

"We play more in fresh to order, right off the grill, hard scooped ice cream, mixed milkshake, with experience in the restaurants. That’s where I think we differentiate ourselves and that’s why we look forward to these kinds of locations," Michel says.

The brand, he adds, won’t look at freestanding buildings. There remain a number of casinos Johnny Rockets can target, as well as theme parks. He highlighted outlet malls as well because of international travelers.

Overseas, the company plans to grow in countries where it already has strong footholds, places like Chile, Mexico, and the Middle East, as well as some new-market development.

While this unfolds, Johnny Rockets’ menu is taking a bit of a simplification approach. The chain is scaling back from six to four limited-time offers per year. And it will glean ideas from international trends domestically, and vice versa. A Bourbon BBQ Burger and an Irish Crème Extreme Shake are in the works. Johnny Rockets is also investing in a “Fusion” store design that combines some old elements with modern touches. Juke boxes, for example, but now in digital format.

“Our focus is going to be on flawless execution in the restaurants,” Michel says. “That’s how we’re going to stand out.”