The casual-dining company says it has $26 million in cash.

The company is using management teams and key hourly personnel to operate the carryout business, which is being offered with a limited menu. The brand—which oversees 47 units—said 45 of its locations have converted to the takeout platform. The company’s Lyndhurst Grill is temporarily closed because of traffic limitations unique to the location.

Here’s a look at how steeply the trends moved: 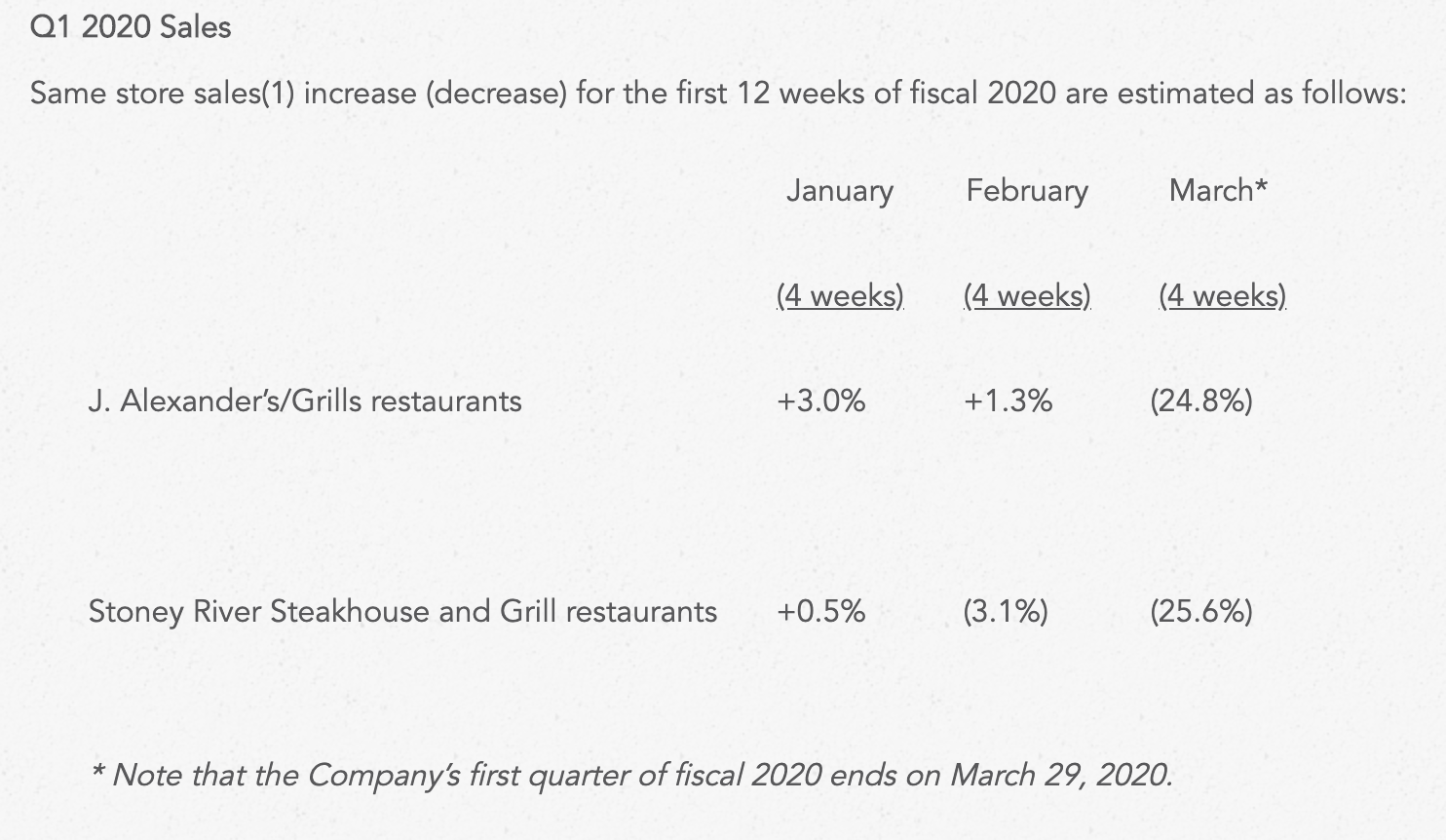 The brand drew down $17 million from its credit facility, pushing its cash reserve to $26 million.

The restaurant company said its cash is enough to fund required cash obligations through late summer to early fall. It added that its liquidity could change depending on financial relief from the federal government. The brand owns real estate at 18 units, and six of those are debt-free and could be used for incremental borrowing.

For its employees, J. Alexander’s implemented a policy that gives up to two weeks of sick pay for hourly workers infected by COVID-19 or employed at a restaurant that closed in response to the outbreak. The company estimated that if all 47 restaurants closed, the cost of the policy, in addition to payroll taxes, would be $1.2 million per week.

The company anticipates that its distribution channels will meet the demand of its limited menu and carryout platform. Beef inventory should be adequate for the next four to five weeks. Management will monitor the situation nationally, so that it knows when to ramp up inventory once the mandatory closures have ended.

“I could not be prouder of the teams at each of our restaurants, along with our veteran operations leadership group, for the way they have responded and adapted in these unprecedented times,” CEO Mark A. Parkey said in a statement. “Based on that response, I am confident that we will survive the current storm. However, I am also aware of the pain and uncertainty that all of our team members are experiencing in the midst of this ordeal and pledge that we will do our best to manage the business in such a way that we can, as a family, regroup once we reach calmer waters.”

Additionally, J. Alexander’s curtailed capital expenditures “unless absolutely necessary relative to a restaurant’s safe operation.” Two new restaurants scheduled to open in the latter part of fiscal 2020 are at the front end of the construction cycle, the company said. Management intends to negotiate with the parties involved to der any outlays possible for these locations.

J. Alexander’s was already dealing with some uncertainty in its business. The company said in August it was expanding a “review of strategic alternatives,” with one option being a possible merger or sale. Another a strategic, large investment in the company accompanied by a “significant” share repurchase; or the acquisition of complementary concepts to increase J. Alexander’s revenue base and operating leverage.

In its annual report, filed in mid-March, J. Alexander’s said it retained Piper Sandler & Co. as financial adviser to assist in the process. The review was ongoing and the company noted none of the above options could come to fruition.

The company institute a new Resy reservation system that operated for its full quarter in the three months ended December 29. The move negative impacted traffic by about 0.3 percent in Q4 but saved roughly $25,000 in operating expense line.

In light of COVID-19, Resy implemented a new feature where guests can select from four set dinner packages online; pick the time they want to pick up the carry-out order at the restaurant; and pay for the order online. This feature will be live at all corporate restaurants currently using the carry-out model and will allow for curbside service, too, the company said.

J. Alexander’s is another in a string of restaurant brands who have been forced to cut costs amid the pandemic.

Luby’s announced Tuesday morning that it is temporarily closing 35 restaurants and furloughing more than half of its corporate office. That’s in addition to the 39 units it closed earlier in the week. Now only 37 locations under the brand remain open. For the corporate staff that remains, salaries will be cut by 50 percent.

Craftworks Holdings, parent of Logan’s Roadhouse and Old Chicago Pizza, made a similar move Monday by furloughing most of its 18,000 employees and closing 261 restaurants after a bankruptcy sale fell through.