Beef 'O' Brady's has guarded its value platform by adding higher quality items and addressing gaps in its menu instead of taking price.

It’s All Coming Together for Beef ‘O’ Brady’s

The 150-unit grill chain is surging thanks to a series of menu, design, and tech changes.

The word Beef ‘O’ Brady’s chief executive Chris Elliott uses to describe his 150-unit chain’s revitalization is “coalesce.” Picture half a dozen initiatives meeting at the table. Not all at once, but slow building over a five-year period that really began with a competitive lightbulb going off.

Elliott, a former El Pollo Loco franchise CEO and Cinnabon and Church’s Chicken leader, took the reins in 2010. Four years later, Elliott says, Beef ‘O’ Brady’s scoped its competitive set, brands like Applebee’s and Buffalo Wild Wings, and asked “How can we compete with these guys?” And this as a regional player going toe to toe with billion-dollar brands.

“We felt like we could beat them in value,” he says.

That might seem counter intuitive at first glance. Casual giants steal share from independents and micro-chains by competing at scale. Typically marketing value more aggressively than small company’s budgets could ever allow. “They’ll probably spend more in a month, electronic media and stuff, than we’ll spend in a year,” Elliott says. That and weathering commodity storms with collective purchasing power.

But this was 2010, not 2019. Applebee’s strayed from its value-seeker perch and shifted in unfamiliar directions, like the wood-fired grills that launched in 2016. Inflated menus were commonplace, along with LTOs that infused complexity into operations and muddied the ROI of deep discounts. It was, in a lot of ways, an era when casual chains drifted from their core principles trying to appeal to a new generation of consumers we didn’t quite understand yet. The “all-things-to-all-people” aftershock of trying not to get left behind when consumer preference shifts but hasn’t solidified yet.

Elliott says Beef ‘O’ Brady’s saw this unfolding and decided to carve out a niche in an area many competitors weren’t—everyday value.

“They were kind of going in a different direction from value,” Elliott says of competitors. “And that’s when we said, ‘look, this is an area where we can compete.’ It just happened to be they were walking away from it and we were diving into it.”

Elliott admits those chains have come back to value, with Chili’s 3 for $10, Applebee’s all-you-can eat deals, Dollarita, and other offers. Yet there remains a difference, he says. “They do it on a promotional basis,” Elliott says. “It exists in our restaurants every day of the week and we support that throughout the year with additional promotions to give it some top spin. But our value is all day, every day.”

“I think the distinction is if you do value you can’t do it intermittently,” he adds. “It has to be part of your DNA.” 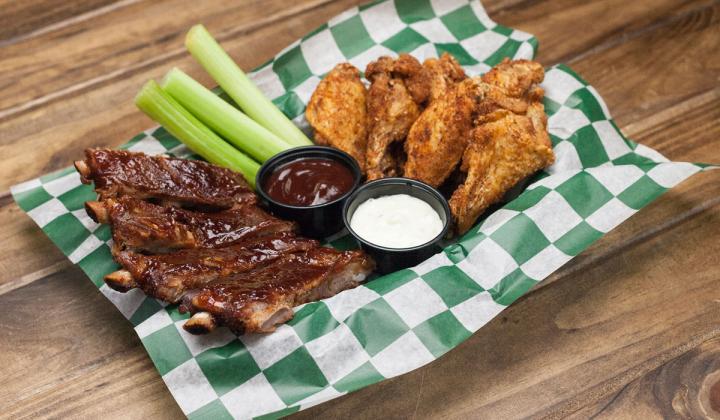 Beef 'O' Brady's daily value has been key to its resurgence.

Notably, Beef ‘O’ Brady’s has taken very little price in recent years, unlike many chains trying to capitalize on wage growth and cover for traffic loss. That’s just not who Beef ‘O’ Brady’s customer is, however. They’re price conscious families that want a good deal. And that’s not a brand promise Elliott is willing to compromise on.

Here’s an example of how serious Beef ‘O’ Brady’s is on the subject: Franchisees can’t set their own prices thanks to a new POS system corporate installed.

But the daily deals are the foundation. They work, Elliott says, because they don’t change in purpose. Taco Tuesdays, for example, have run a $5.99 price tag for five straight years. Burger Mondays (the same price) hasn’t change, either, and isn’t anytime soon. Wing Wednesdays (varies by store), Fajita Thursdays ($9.99), and Surf & Turf Fridays ($12.99) round out the everyday value platform. And Elliott says they’re adding Saturday and Sunday deals in the near future.

“The franchises are after me,” Elliott jokes. “They think we should take price on these things. And I’m saying, look at the results, guys. Look at the repeat visits that we’re getting on these days of the week. If we just sit tight, we continue to separate ourselves from people who continue to take price.”

“If you do that,” he adds, “all of sudden your daily deal is no longer a deal. It’s just like everything else. We’ve had our infernal debates about this but we’ve been consistent to separate ourselves from our competitors, and to provide not fake value but real value.”

As Elliott says, Beef ‘O’ Brady’s current progress is the result of several changes, not one. Value was just the springboard.

The company has reported positive same-store sales in seven of the last eight years at an average of 2 percent. Year to date, it’s 3.4 percent, mixed 1.9 percent of check and 1.5 percent traffic. Beef ‘O’ Brady’s has been in the green for 27 of the last 30 months.

In June 2018, the brand’s new value offering triggered the strongest quarterly performance it its history—4.3 percent same-store sales with traffic up 2.1 percent.

Before getting into some of the other levers, it’s important to highlight a turning point in Beef ‘O’ Brady’s history. The company partnered with restaurant investment group CapitalSpring in June 2014 to recapitalize FSC Franchise Co., LLC, the franchisor of Beef ‘O’ Brady’s and sister concept The Brass Tap.

Elliott says Beef ‘O’ Brady’s was able to invest in restaurants, new tech, and store remodels “in a way in which we moved the ball down the field a lot faster than it had been,” thanks to the ownership change.

One of the biggest differences, which was a day one goal for Elliott, was to buy back stores so they could show franchisees why significant changes were worth the bill of purchase. Today, 26 of the company’s 150 locations are corporate. Once Beef ‘O’ Brady’s brought those into the fold, it remodeled stores, put in a new POS system, upgraded the kitchen for the first time in three decades, and saw immediate results. “And that got the franchise owners attention,” Elliott says. 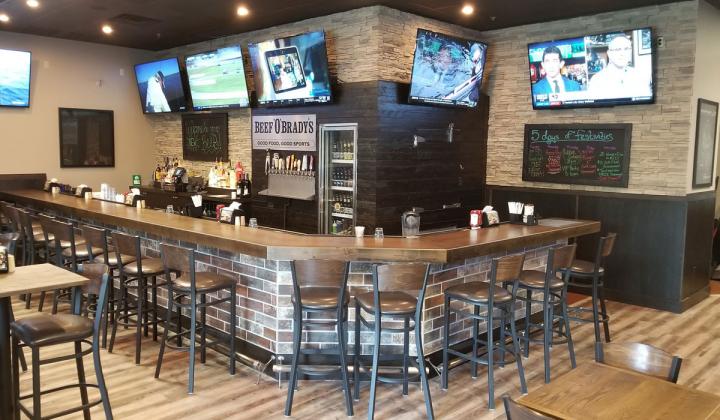 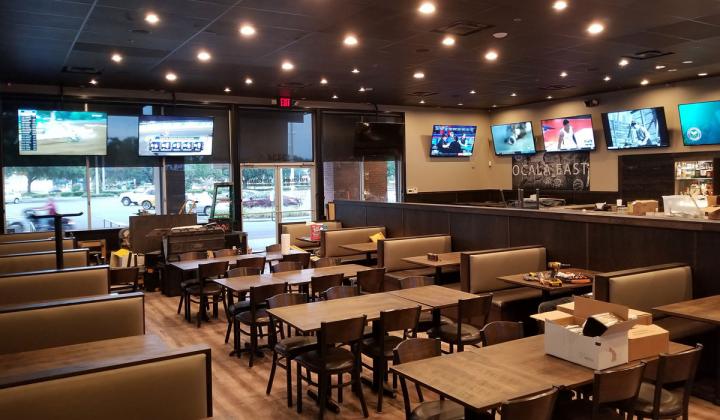 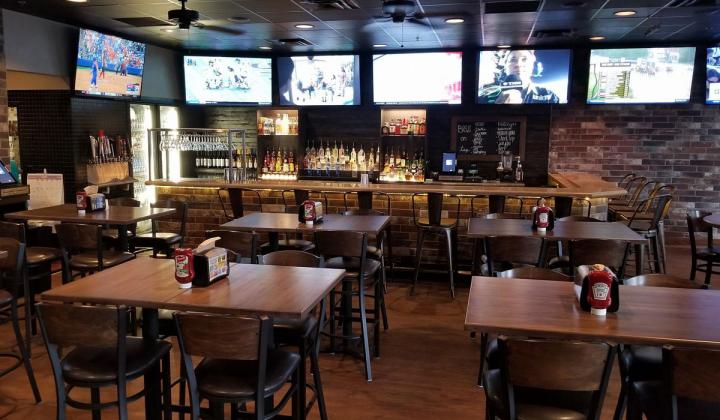 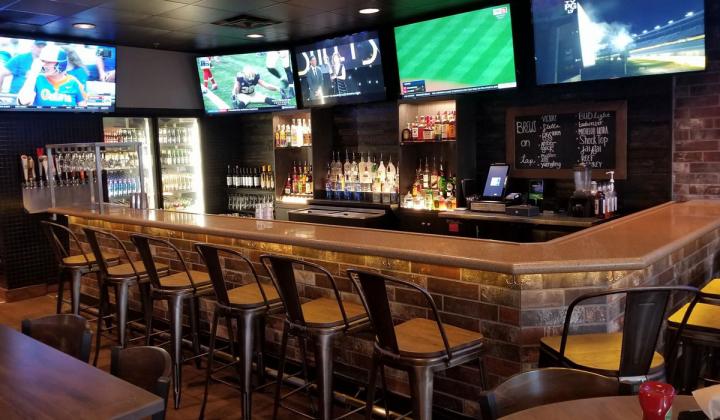 Beef 'O' Brady's remodels have turned in solid results. And it all started with buying back stores from franchisees.

A remodeled location in Ocala, Florida, has already seen sales lifts between 20–30 percent. The chain has remodeled 14 corporate stores. They’ve seen an average boost of 20 percent. In the last year and a half, 16 updated franchises have averaged north of 16 percent. Another 14 or 15 are currently working on some form of reimage, Elliott adds.

The new look updates flooring, bathrooms, ceiling, furniture, and expands the bar. Roughly 15 percent of Beef ‘O’ Brady’s sales come from alcoholic beverages. The brand added liquor in a lot of restaurants that only sold beer and wine before.

Having corporate units lets Beef ‘O’ Brady’s test items and concepts. It also showed executives where some glaring issues were. “We didn’t have any benchmarking,” Elliott says. “I said we need to own some stores have skin in the game, and we need to demonstrate what is possible at Beef ‘O’ Brady’s.”

One that flared up was the fact Beef ‘O’ Brady’s featured just one menu. The brand wasn’t taking into account spending habits tied to occasions, from lunch to dinner, weekdays to weekends.

In response, Beef ‘O’ Brady’s launched a separate lunch menu and created a grill platform that appealed to dinner guests looking for a step up in quality (and willing to pay the price). Items like ribeye, salmon, and pork chops. It took two years to refine the menu, Elliott says, and is now live in about 60 percent of the system.

“Our customers love it and it’s convinced the franchisees that yes, we can do this. And not only can we do it, we can do it well,” Elliott says. “It makes a difference and has made a huge difference in our traffic on Fridays and Saturdays, particularly at dinner.”

Beef ‘O’ Brady’s added a lighter side page to its menu as well, “which basically makes us a little bit more female friendly,” Elliott says.

The lunch menu, in particular, though, has been a big driver. It features value combos you might see at a quick-serve, like pick twos from Panera Bread. While it’s available all day, bringing attention to specific daypart items effectively showcases Beef ‘O’ Brady’s strengths, Elliott says. Customers don’t have to go searching for them.

Today, the lunch daypart accounts for 35 percent of Beef ‘O’ Brady’s sales, which is a jump of 10 points. 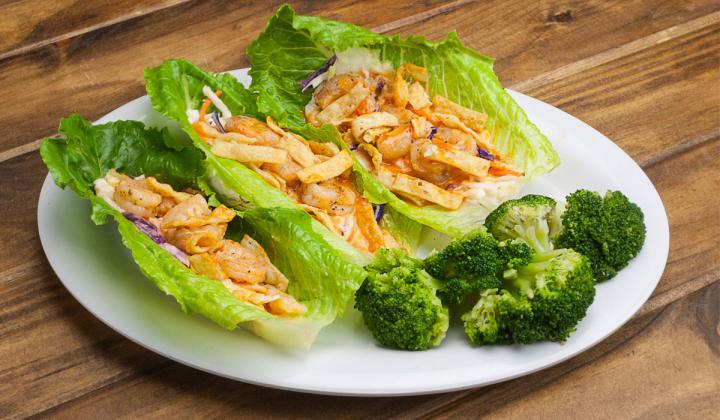 Lettuce Wraps are one example of some lighter items joining the menu at Beef 'O' Brady's.

These kinds of changes are the heart of Beef ‘O’ Brady’s value efforts. The brand has been able to avoid taking price by adding higher quality items. And, as Elliott puts it, “we’ve been able to get our check average up but not by taking price, but by filling in gaps in our menu that were weak.”

As for what’s next, the Impossible Burger is on deck. As are more appetizers that aren’t fried, and ice cream as a dessert. Along with the extension of value days into the weekends, “we think it’s all going to make a positive difference,” Elliott says.

Recently, the company introduced Triple Play Meal Deals (salad or soup, entrée, and dessert) on Saturday nights starting at $13.99. The chain got on board with third-party delivery. Additionally, Beef ‘O’ Brady’s system has shifted to a more profitable, tighter operation in recent years. In January 2018, there were 172 locations.

Even with the recent jump, Elliott says, there’s plenty of optimism ahead. Beef ‘O’ Brady’s revitalization hasn’t hit high gear just yet. Only about two-thirds of the system has implemented these changes and there are plenty more to come.

“We still have room to grow is the way we put it,” he says.