Shari's was well into a multi-year business transformation when the pandemic struck.

Inspired by COVID Challenges, Shari’s Revamps Behind the Scenes

Parent company of Shari’s, Coco’s, and Carrows turns the challenges of the pandemic into opportunities to build a more cost-effective company.

For restaurants, the responses to COVID-19 have centered almost entirely around consumer-facing services like curbside pickup, repurposed parking lots, and contactless payment systems. But for Shari’s Management Corporation, which owns Shari's, Coco's, and Carrows restaurant brands, some of the biggest changes are taking place behind the proverbial curtain.

“In 2020, the only thing missing were locusts. It has been one of those years where every day you wake up and you’re reevaluating your business,” CEO Sam Borgese says. “There are difficult times that have real opportunities. It’s not that we would welcome them, but … we've taken the opportunity to take a look at our business and do a bunch of other stuff.”

The brand was well into a multi-year business transformation when the pandemic struck, and rather than abandon those plans in the midst of such chaos, they were accelerated. The most notable initiative being perhaps the decentralization of its corporate offices, which marks both a return to its California roots, as well as an embrace of the burgeoning work-from-anywhere mentality.

In 2018, Shari’s purchased California brands Coco’s and Carrows from Food Management Partners. Borgese, who became CEO of Shari’s the previous year, had led Coco’s and Carrows (then under the Catalina Restaurant Group) in the mid-2000s. Although the menus vary from concept to concept, each serves elevated diner fare across the three dayparts, plus a special emphasis on pie.

Following the acquisition, the larger group worked out of Shari’s Beaverton, Oregon, headquarters. But it also started building a platform to make its support centers and company structure more efficient.

Downsizing the Beaverton office and spreading its corporate presence to include offices in Dallas and just outside San Diego was more cost-effective; Borgese says the new trio of offices costs half what the original Oregon headquarters did.

So much attention has been paid to how restaurant brands are changing on the ground level, but for multiunit concepts, corporate-level operations are equally important. As the pandemic decimates sales, wages push upward, and supply chains grow more erratic, restaurants that can cut overhead expenditures have an edge over the competition. Not to mention, smaller offices and more flexible workplaces are in line with a larger shift that the pandemic has only sped up.

“The idea of going to California or Dallas was really based around the change that we see happening in general, not just the restaurant industry. We have a new generation of workers who are 80-million-plus strong that have really been setting the pace for working remotely, starting with the technology industry and the WeWork platform,” Borgese says. “All of those things really built a culture of people that were more relaxed working from home or from third places such as Starbucks.” 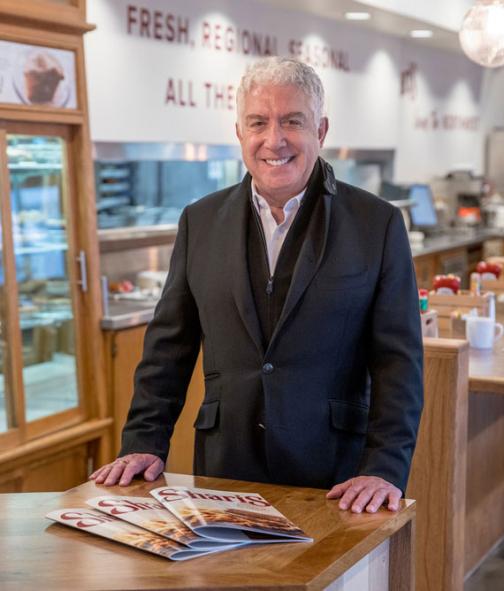 The selection of Carlsbad, California, and Dallas was informed by a study Shari’s commissioned  to find top restaurant hubs around the country. The findings showed that while Oregon had a rich culinary scene and high concentration of chefs, it lacked concepts with multiple locations. In fact, Borgese says Shari’s may be the largest regional chain in the state. By contrast, Southern California, Texas, and Florida were major hubs that would be ideal for not only expanding the brands, but also retaining top industry talent. The economically sized offices would give those employees the opportunity to work on-site a couple of days per week should they so desire.

Florida was too far to pursue at present, but Borgese points out that Dallas is a two-and-a-half-hour plane ride to San Diego, which is, in turn, about two-and-a-half hours from Portland, Oregon.

Technology is also playing a central role in Shari’s business transformation. The coronavirus spurred restaurants to incorporate technology into their businesses at unprecedented rates. In the past, full-service operators have been leery of introducing too much tech for fear that it would diminish the dining experience. So while their quick-serve counterparts invested in automation as a way to cut labor costs, sit-down restaurants took a more measured approach. For Shari’s, Coco’s, and Carrows, the technological upgrades had less to do with consumer-facing procedures and more with centralized administration.

So instead, the company built a set of solutions that was integrated into a single back-office. It’s been an adjustment since the support team had long been accustomed to entering, calculating, and analyzing data manually. But ultimately, these back-end efficiencies complement the restaurants’ hospitality quotient, Borgese says. By trimming costs at the administrative level, the brands stay profitable without cutting staff or passing costs onto the consumer.

Ghost kitchens are another recent, cost-saving addition to Shari’s operations; the company introduced its first-ever virtual brand, Coco’s Famous Hamburgers, through an exclusive partnership with DoorDash. Borgese says the decision was a no-brainer; under-utilized kitchen space across 133 Coco’s and Shari’s restaurants made it relatively easy to integrate the concept within the existing framework. Plus, insights from DoorDash helped identify menu categories that would perform well in takeout and delivery.

“We have a tremendous investment in our core base, in our core brands. We think that’s where our time and energy should be. We’re not going to turn into a virtual brand machine; we don’t have that philosophy. But we do think that if you have the kitchen capacity, then you should use that capacity to be creative,” Borgese says. When COVID-19 ends, he anticipates in-person business will once again demand more space within the kitchen, though he says that off-premises options like virtual brands are likely to remain.

While the menus at Shari’s, Coco’s, and Carrows won’t be undergoing any drastic changes, they are staying in step with broader trends. Last month, Shari’s became the first family-casual concept to offer the Impossible Sausage at all of its locations.

For all these changes—and in the middle of a crisis, no less—it begs the question of what Shari’s has in store for 2021. But as a seasoned restaurant leader, Borgese understands the importance of pacing, especially when it comes to large-scale changes.

“I'm really anxious for a break,” he says with a laugh. “We’re definitely going to take the first half of 2021 to tune up what we’ve done. … If we have to tweak it, we will. If it’s not working, we will change or we will discard it in order to keep on our purpose and on our vision.”