In its 75th year, the classic pizza chain is taking craft (pizza and beer) to the next level.
January 2018 Danny Klein

“We’re looking to build a beer culture so strong it’s almost a religion,” Weldon says. “And all of the things we’re doing right now are leading up to that.”

In early November, the chain, which has 65 corporate locations in the U.S. and 34 franchised, along with nine international restaurants, launched a new handcrafted menu. But October 1 is when the beer arrived. Weldon and chief operating officer Bill Golden say the moment already holds a very special place in the brand’s rich timeline, a history that dates back to 1943 when Ike Sewell created deep-dish pizza and founded the concept on the corner of Ohio & Wabash in Chicago.

The decision to start rotating local craft beer and add lines in each restaurant is more than an operational change for Uno—it’s a significant redrawing of the culture within its four walls.

“This has taken a lot of training and a greater awareness and knowledge that’s so important to being a real craft-beer brand,” Weldon says. “Delivering craft beer in our restaurants is about much more than simply expanding the craft beer lines that you have.”

“It’s been a concerted effort throughout the entire organization,” Golden adds.

This past summer, Uno ramped up its training in preparation for the October 1 rollout. Golden says the program was designed to immerse the entire Uno organization into beer at all levels, from management and leadership to bartenders, servers, and all guest-facing employees. The entire leadership team went through the first level of the Cicerone Certification Course, recognized as the most respected credential for beer professionals.

Uno then developed what it calls “beer gurus.” There are two or three in each region of the country to assist local leadership and ensure Uno’s beer culture is being fostered appropriate to company standards.

Uno created Beer 101, Beer 201, and Beer 301 programs in-house to teach employees the nuances of craft. There are meals and tastings, and Uno even hosted what it labeled the “Summer Uno Olympics” this past year.

“It was very focused on craft beer and, of course, craft pizza, but really it was about taking the entire organization through the training and identifying the best and most knowledgeable in reach region,” Golden says. “Then we whittled it down and had one restaurant walk away as the winner.”

Weldon says the training is worth the investment on multiple levels. From the heart-of-the-house perspective, arming employees with this kind of knowledge fosters pride and encourages longevity. It also results in customer-employee interactions that position the brand as an expert in this space.

“We continue to focus on building what we call [employees’] beer swagger. And that all starts with having the knowledge,” Weldon says. “With the knowledge grows confidence. They practice those skills and it creates that swagger where they have confidence when they approach that table with guests or the bar and really engage about craft beer.”

“They're excited about talking about craft beer and craft pizza and how they pair together, and they’re excited to share that knowledge with guests,” he adds.

Uno created a video platform, which employees can watch through their mobile devices or tablets. There are quizzes. Employees advance past levels and are rewarded with badges, and also earn the opportunity to recognize people who can mentor them.

“People want to be the best at their job,” Golden says. “The more we can grow them and teach them and give them information, where they have that confidence to engage the table, of course that creates a feeling of success and they do retain. The passion starts to build.”

Golden says this process is evergreen. Uno didn’t debut it over a few months and file it away once the taps started flowing. That’s part of the reason why the chain built so many layers into the program. Uno wants the training to sustain and be adaptable for whatever might come next. And this realization was something Weldon says the team understood from day one, when a fork in the craft-beer road was reached: should Uno just expand its program with more taps, or should it anchor it with something more substantial?

“We realized quickly,” Weldon says. “To have credibility in the craft-beer business, to truly deliver a great craft beer and craft pizza experience, this training and the beer culture needed to be an important part of that, along with the idea that it’s not just how many taps you have; It’s also the ongoing rotation of what’s on those taps. Because the craft beer loyalist who is coming into our restaurants every day looks at the beer menu that they see and decides where we stand.” 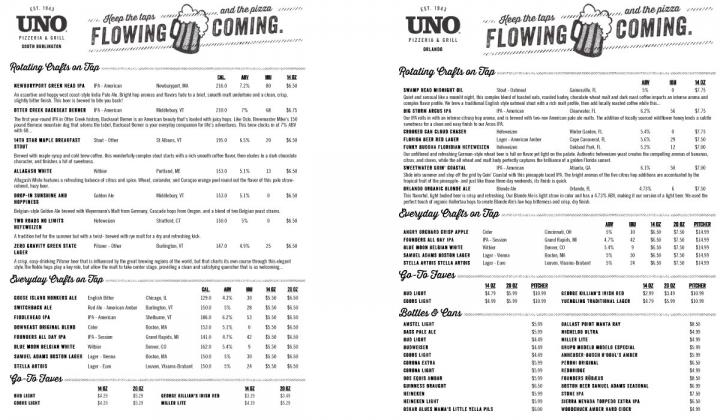 Uno's prints out new beer menus every day at each location.

Uno had that guest in mind when it came up with the idea to print an extra menu, powered by Untappd, each day, in every restaurant. Diners come in and receive not just the regular offerings, but also a list of what’s being poured, on tap, in bottles, cans, and so forth.

For example, a menu from Orlando shows seven different local offerings. A stout, two IPAs, two Hefeweizens, a Lager, and a blonde ale. Below that are five everyday crafts on tap, like Blue Moon, Samuel Adams, and Stella Artois. Next is “Go-To Faves,” such as Bud Light and Coors Light, and then an extensive bottle and cans list. These options change by the store and are decided at the restaurant level. And they change seasonally.

“That menu is probably the most prominent cue, in addition to the biggest cue, which are our servers and our staff who bring this beer knowledge to the table and can talk to craft beer and craft pizza together,” Weldon says. “The menus and our people show people we’re in the craft-beer business.”

Weldon says Untappd has been a strong partner for the chain. It helps Uno make sure it’s menuing the latest and more relevant beers. All the restaurants use it to manage their lists as well as print out the menus. Also, subscribers can follow Uno on Untappd. Weldon says the list has surpassed 6,000 followers, a group that “didn’t even know we existed in the past.”

Uno hadn’t switched up its menu in about seven or eight years before the changes, Golden says. The brand was “in an older format that probably reflected a different time for the brand and where we were,” he says. 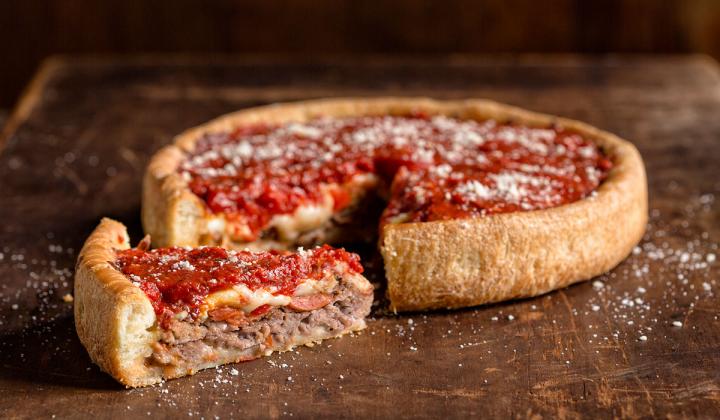 The new look is all about stressing that “craft” element and Uno’s brand heritage. There are new deep-dish and thin-crust offerings, as well as other items. Some options include new Chicago Originals, like the Chicago Meat Market with layers of garlic sausage, Italian Beef, meatballs, pepperoni, Mozzarella, and tomato sauce; and the Spicy Hawaiian thin-crust pizza with sweet red chile sauce, jalapenos, pineapple, Mozzarella, Romano, Cheddar, and a ranch drizzle. An example of a non-pizza add is the Wild Wild West Burger—half-pound burger with sliced ham, honey barbecue sauce, an onion ring, garlic mayonnaise, and Cheddar.

Golden says Uno is “very excited where the brand is at today, about our success that we’ve seen in the market, and excited about expanding that success as we go forward.”

The growth strategy includes opening new company units as well as expanding the franchise base. Uno is also in the process of developing a new prototype, something it plans to unveil over the next year.

This is Uno’s 75th anniversary as well. Weldon says there are celebrations in store. Special honorary pizzas could hit menus, as well as possibly a craft beer developed specifically to honor the occasion.

“The 75th birthday is big and it’s the best time to celebrate great pizza and great beer,” Weldon says.

Adds Golden: “We’re really excited about the brand today and the brand of tomorrow. What goes better than craft pizza and craft beer? That’s really where we’re heading. That’s how people embrace and love us.”