Beer of all styles and sizes. World of Beer's mobile app will even keep track of your choices and recommend future options.

Inside the Impressive Evolution of World of Beer

This past quarter, World of Beer rebranded as World of Beer / Bar & Kitchen. It might seem like a subtle change, but it’s hardly a surface one. And it’s one chief executive officer and president Paul Avery has been barreling toward since he purchased controlling interest in the Tampa Bay-based brand in January 2013.

Avery, who retired as the No. 2 at Outback Steakhouse’s parent company in 2009, asked the same question everyone did when World of Beer first started to gain traction: Was this a fad? Clearly, craft beer smashed any and all early predictions. But that boom has generated a different discussion. Where in the scope of local breweries and independents does a suds-focused chain with multiple locations fit? Can an extensive, 500-plus beer selection compete with hyper-local?

Take these figures from the Brewers Association, a not-for-profit trade association dedicated to small and independent American brewers:

Avery recognized World of Beer needed to adjust in order to stay ahead. In one example, it bailed on Asheville, North Carolina, a mountain town with a local-first heartbeat, as a possible location. Being a chain simply won’t work everywhere. But being a chain also has its perks. For World of Beer, Avery harnessed the company’s resources to widen its business model and appeal to customers in ways it hadn’t before. This multi-pronged process took time to mature, and the initiatives are starting to return in a significant way.

Six locations opened in 2017 for the 65-unit brand, which has stores in 20 states and three countries. Systemwide sales topped $100 million and at least 12 new units are expected for 2018, including fresh markets in Indianapolis; Owings Mill, Maryland; Tuscaloosa, Alabama; California; and Louisiana. Internationally, Avery sees three to four additional units in South Korea. World of Beer signed a deal in India, and there’s commitment from a Beijing partner to build 15. Shanghai also has plans to expand.

“We think World of Beer presents a significant growth vehicle for domestic and international development. We’ve defined the footprint, the investment level, and the unit economics,” Avery says.

As the new branding suggests, World of Beer has enacted widespread changes since Scott Zepp and Matt LaFon brought it to market in 2007.

“We continue to have more people enter the craft beer world. It’s become a very crowded field,” Avery says. “Craft beer has become quite ubiquitous in the industry. To be successful in the craft beer world you really need to lead with quality and innovation. And if you’re not leading with those attributes, you’re just not going to be around very long.”

"To be successful in the craft beer world you really need to lead with quality and innovation. And if you’re not leading with those attributes, you’re just not going to be around very long.” — Paul Avery, World of Beer CEO 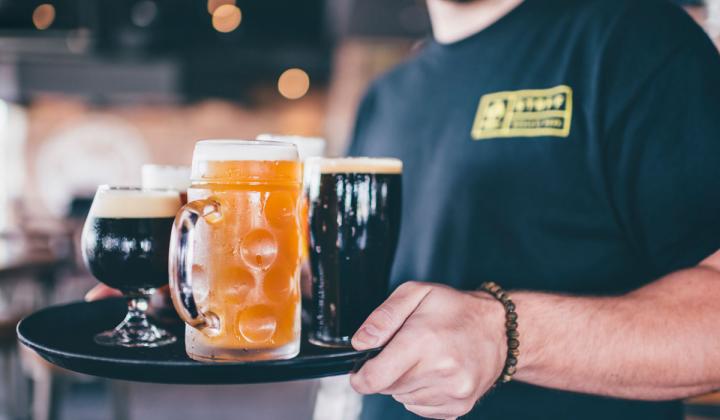 After Avery started, he directed the implementation of a food program. It arrived in Q3 of that year but took some testing before World of Beer landed on a working formula. Avery says food hit its stride in 2014 and has gained momentum since. Culinary director David Belliveau oversees the program currently, and World of Beer is bumping up on 50 percent of sales being food related. In the past two years, World of Beer has also featured a lunch menu focusing on value and speed, including a 5-ounce snifter of beer for $2.50. There are new items, like The Cali Bowl with seared tuna, blackened steak, or beer-battered shrimp, Bibimbap, chicken wings, salads, flatbreads, burgers, and more. Avery says certain World of Beer locations actually serve a lot of beer during the lunch daypart, which is unique from other concepts he's worked on.

Brunch, or “Beerunch” on Sundays (Saturdays as well in some locations) has been a big draw as well, Avery adds.

Another key change is World of Beer’s spirits program, which didn’t exist prior to Avery’s arrival, either. Those menus have been on the table for just about a year, and a new one is coming this spring. The program is generating about 12 percent of revenues. “We’ve injected greater value into our beverage program. So we’ve kind of gone on both sides. We’ve bumped it up more with some quality drinks and premium selections, which is very much where the consumer is. But at the same time balancing offerings of value as well,” he says. There are cocktails, like the Strawberry Caipiroska—a twist on Brazil’s national cocktail made with Tito’s Handmade Vodka instead of Cachaca; Sangrias; Martinis; Margaritas; a Southern Old Fashioned; and a robust Mule program with six different options, including a Raspberry Jalisco Mule made with Patrón Reposado Tequila, zesty Ginger Beer and tangy lime juice with a slight raspberry twist.

Additionally, World of Beer added pitchers of beer half a year ago, which has “been a great success for that customer looking for that experience,” Avery says.

Just this past quarter, the World of Beer / Bar & Kitchen branding arrived in signage and digital messaging. It’s updated across the company’s social platforms and is in the process of physically flipping over nationwide.

“There was some brand confusion of is this a beer takeout place only. Do they serve food? By adding that bar and kitchen it more clearly identifies who we are,” Avery says.

And the other additions have allowed World of Beer to position itself more effectively overall.

“Customers are using us differently now. It’s not so much for happy hour drink and then they go somewhere else for dinner,” he says. “They’ll come to us in a group and have happy hour drinks and then have some food while they’re there or stay for dinner afterward. It’s broadened our appeal.” 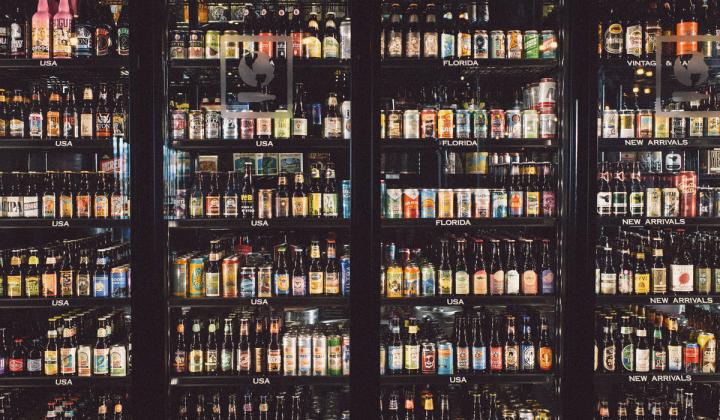 World of Beer's 500-plus selections continue to draw in guests across all dayparts, even lunch.

World of Beer’s loyalty program anchored its base, Avery adds. The program is different from other concepts in that it tracks usage of beers and can suggest new options to customers. One of the factors driving the craft beer craze, Avery says, is the desire to branch out and experience new products. World of Beer’s app makes that process seamless.

What World of Beer also does, which it has done from the beginning, it make sure its training program establishes a culture of friendly expertise. Avery says the chain breaks down its target guest in three different categories: casual drinkers, core drinkers, and the aficionados. Its staff is trained to identify these types of consumers and react accordingly.

“The casual or newcomers, IPAs, people entering the craft beer experience for the first time,” Avery says of the first category. “And then the cores are more the ones who gravitate toward a specific type or style of beer. And they know they want that style and they just navigate through different options you have there. Then the aficionados are the ones who are most interested in having an interesting conversation about the beer ingredients and the process and the pouring techniques and such.”

“Its important for our staff to be able to speak with each one of those three different profiles, and to not become intimidating for the casual consumer, yet be able to identify and speak with an aficionado as well.”

World of Beer employees run through a two-interview process where Avery says managers will look for workers “who have a great spirit about themselves. A great positive attitude. Excellent interactive social skills.” World of Beer can teach them the rest.

World of Beer is gearing up for the future with two recent executive hires. The company tapped Kevin MacCormack as chief financial officer and James Buell as VP of marketing in late April.

MacCormack was the managing director of investment banking for Raymond James & Associates, Inc. for over 16 years. Buell spent 13 years as a marketing executive at Hard Rock International.

Avery says the hires are part of strengthening World of Beer’s infrastructure as it looks to expand at a 25 percent clip. And Avery is no stranger to scaling a business. Outback grew from three restaurants when he started to more than 1,400 in 19 countries. Donnie Everts, World of Beer’s VP of international development, is key in this trajectory, Avery adds.

“Donnie has extraordinary experience in the past developing brands all over the world. We were getting and still get a number of phone calls from around the world from people who are interested in franchising and introducing World of Beer,” Avery says. “Put those two together and we have a formula for the future.”

Avery expects California to be a big opportunity. The first is slated for a suburb of San Francisco in the third quarter of this year.

Right now, World of Beer locations are about 4,500 square feet, and the concept has seen success lately with free-standing locations in addition to its typical endcap and retail-development stores.

“We’ve got some significant growth coming,” Avery says. “Our California partners are exceptionally capable, and have the resources and experience to develop significant business out West. This is an exciting time for World of Beer.”