Denny's is launching new menu items for the movie, like this Lightspeed Slam.

Inside Denny's Intergalactic Campaign for ‘Solo: A Star Wars Story’

From trading cards to a new TV ad, the family chain is pulling out all the stops, and helping fight childhood hunger in the process.
April 2018 Danny Klein

“We are thrilled to collaborate with the team at Lucasfilm and No Kid Hungry for the much-anticipated release of ‘Solo: A Star Wars Story,’” said John Dillon, chief marketing officer for Denny’s, in a statement. “We’re incredibly excited to join forces and bring America an out-of-this-world campaign that will not only feed the excitement of every Star Wars fan and Denny’s guest, but will also do some good along the way by helping fight childhood hunger and raise awareness for this important mission.”

READ MORE: How Denny's revitalized its image and prepared for the future.

The “Solo: A Star Wars Story” trading card packs contain two of 12 different character cards, including Han Solo, Chewbacca, Qi’ra, Lando Calrissian, and more. They also come with a coupon for future use. Denny’s said it would donate a minimum of $1 million to No Kid Hungry through the promotion.

“Since 2011, we have been so proud to partner with Denny’s in the fight to end childhood hunger, and we are honored to be part of this unique promotion,” added Diana Hovey, senior vice president at No Kid Hungry. “Ending childhood hunger takes all of us working together, and we’re so grateful to have the support of both Denny’s and Lucasfilm. Denny’s has been a key partner of the No Kid Hungry campaign, and to date has helped connect kids in need to more than 63 million meals, proving that together we can truly end child hunger in the U.S.”

As for the TV spot, called “Hand of Sabacc,” Denny’s set the ad inside the lodge from the movie. It features two young adversaries who imagine that they are squared off in a high-stakes card game as characters from Star Wars look on, including Chewbacca, from around the booth.

Denny’s is also introducing new menu items to correlate with the launch. This includes Co-Reactor Pancakes, which feature strawberries, strawberry sauce and whipped cream, and a side of Crystal Crunch Rocks, finished with a pitcher of warm citrus sauce to pour over the pancakes; the Blaster Fire Burger—chipotle Gouda cheese, bacon, and spicy ghost pepper sauce; the new Two Moons Skillet; and Denny’s Lightspeed Slam. Crystal Crunch Rocks can also be added to milk shakes. 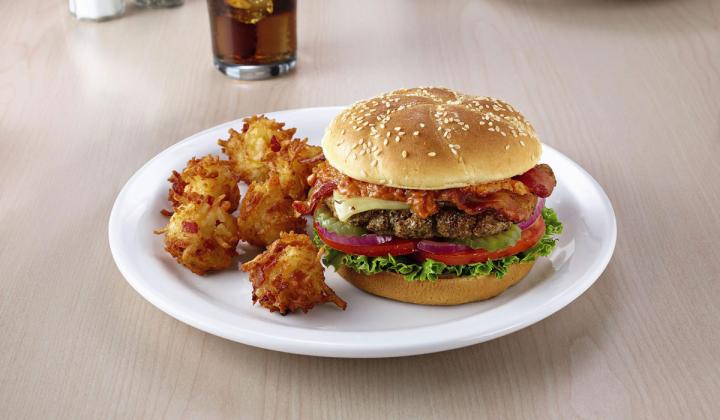 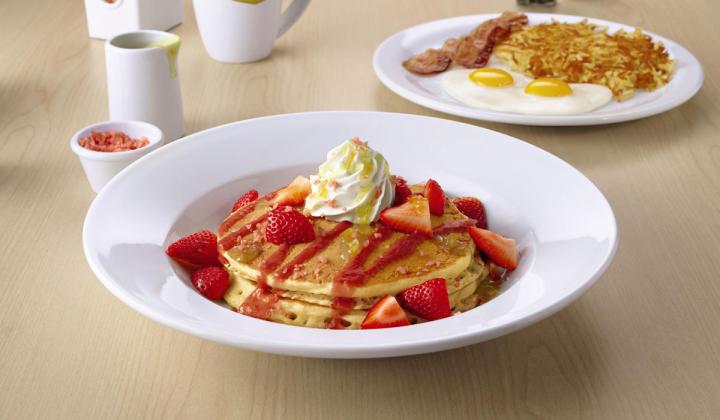 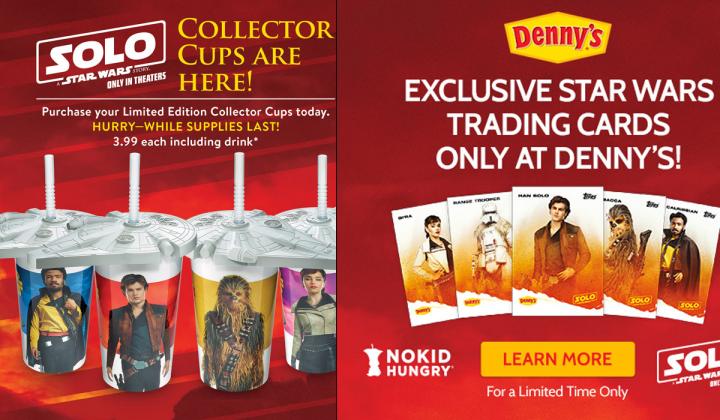 Denny's has special cups and trading cards for the campaign. 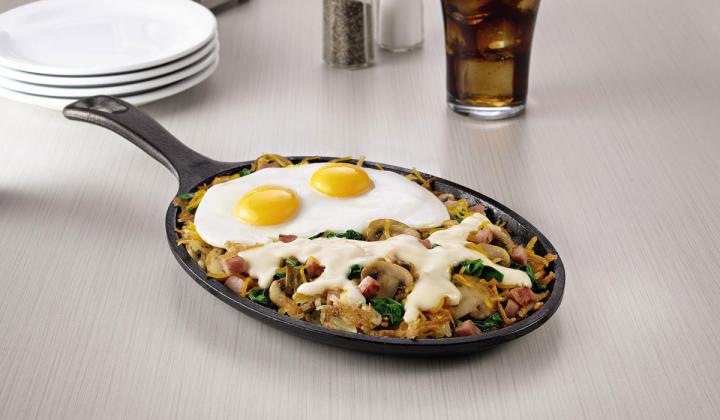 Denny’s is one of six official promotional partners for the movie, joining Esurance, General Mills, Nissan, SOLO Cup, and Symantec.