But what’s been the after-glow effect? Did IHOP’s IHOb star burn brightly and then fade into a marketing black hole?

YouGov’s Plan & Track took a dive into the topic.

Essentially, the data shows that, naturally, IHOP isn’t generating as much buzz as it was when IHOb flooded every corner of the Internet. However, the brand is still receiving more recognition than what’s typical for IHOP in recent years.

YouGov measures a “Word of Mouth” score, which asks U.S. consumers aged 18 and up if they’ve discussed a specific brand with friends or family in the past two weeks. 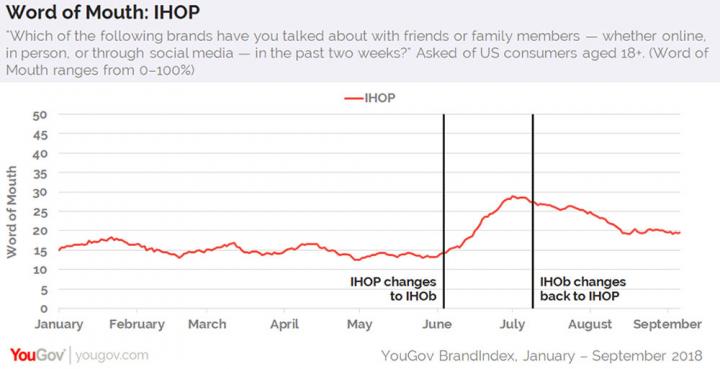 This kind of result extended to other areas of IHOP’s exposure. YouGov’s Ad Awareness score, measured by asking consumers if they’ve come across an advertisement for a particular brand in the past two weeks, climbed to an all-time high of 47 percent in late July. It has tracked downward to today’s level of 37 percent. Once again, “a significantly higher score than anything the restaurant chain has reached since YouGov began tracking it in late 2012,” Marzilli says. 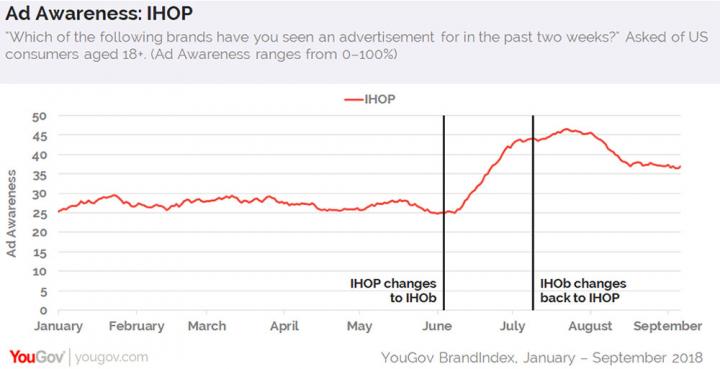 It makes sense that the burger promotion boomed burger sales. Overall, IHOP reported same-store sales gains of 0.7 percent in the second quarter, year-over-year. This beat Black Box’s 1 percent decline average in the family-dining segment, but it wasn’t category shattering, either. It’s important to note, though, IHOP launched the Ultimate Steakburgers with only three weeks to go in Q2. The brand’s Q3 results might reveal a more telling story.

In the meantime, YouGov measured the pulse of IHOP’s Purchase Consideration metric, which gauges the percentage of consumers open to dining at a restaurant chain when next looking for an option. On June 4, IHOP was reporting a stellar 45 percent. It hit a low of 33 percent about a month later among people who had either discussed the brand or seen an ad in the past two weeks. 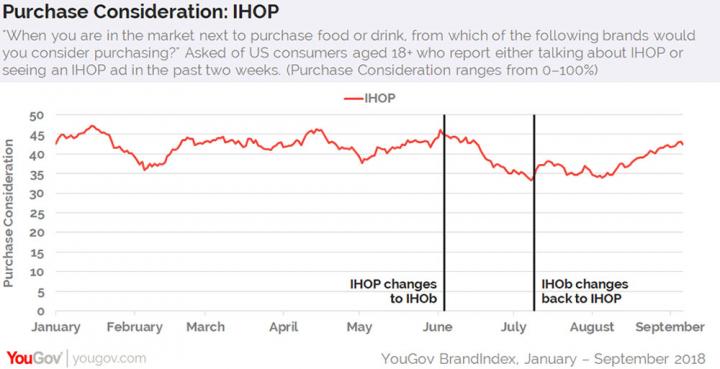 Following July 9—the day IHOP became IHOP again—the chain’s purchase consideration score started to climb again. It returned to 43 percent among the same consumer group, back to pre-IHOb levels. So perhaps customers who didn’t appreciate the campaign were pleased with the return to normal. Or maybe it’s simply a matter of putting IHOP back in the spotlight for the same topic, albeit from a reflective standpoint. Another way to look at it: There’s always going to be a level of attrition following the pulsing of a specific promotion for the same guests who embraced it early. Either way, it was another chance for IHOP to talk about its new burgers, how well they sold, and also to remind everyone how much customers still adore the classics.

Regardless, something that rises from all of this is the obvious, but not always easily executed, notion that bringing IHOP top of mind for consumers, in whatever fashion, is a good idea for Dine Brands. This is something that reflects what president Darren Rebelez told FSR in June. “It’s also been a really great reminder of just how beloved this brand is. And how relevant it is today. I think there’s a misperception out there about our brand that maybe because we’re 60 years young that we’re not as relevant as we should be,” he said.

It illustrates a reality CMO Brad Haley noted earlier as well—having six decades of consumer sentiment can turn an iconic brand into wallpaper if the message doesn’t evolve.

“I always say: the biggest crime you can commit is to be invisible. And if you’re completely comfortable with the advertising that’s usually a sign that your brand is going to be invisible, because there’s nothing for people to recall or remember or be moved by,” Haley said heading into IHOP’s 60th year.

IHOb may have flamed out for now, but there’s no question it gave IHOP a spark to build on for months, and perhaps years, to come.