IHOP is Now IHOb, and Burgers are the Reason Why

By IHOP’s projections heading into the weekend, more than 30,000 people took to social media to guess why the chain was flipping the last letter in its name upside down (literally). At last we have our answer. IHOP temporarily changed its name to IHOb Monday morning, and the switch has nothing to do with breakfast. So you can toss the bacon, biscuits, and butter predictions aside. The “B” actually stands for burgers, a move meant to celebrate the debut of the brand’s new Ultimate Steakburgers.

IHOP took a federally registered service mark on the new name and said it wasn’t a permanent change, just a flip “for the time being,” and one that also includes a new Twitter handle. An IHOP in Hollywood is getting new IHOb signs. Some others might, too. But mostly, IHOPs around the country will stay IHOPs, and the dedication to pancakes won't change, either. Breakfast will remain front-and-center for IHOP, the brand said. In fact, you can order pancakes with your burger, at any time of the day. The marketing push was intended to show how seriously IHOP is taking its new Steakburgers, IHOP president Darren Rebelez said, and the chain is eager to kick off the campaign, menu items, and share what this could means for dine-in traffic.

IHOP's president on the why behind the brand's daring campaign.

IHOP is changing its name to IHOb?

Can IHOP and Applebee’s climb back to the casual-dining summit?

The move, IHOP added, is an indication that its betting big on lunch and dinner—two segments that have trailed, naturally, behind breakfast sales in the past six decades. Breakfast accounted for 49 percent of sales last year. Dinner and lunch were 16 and 28 percent, respectively.

“Everyone knows that IHOP makes world-famous pancakes so we felt like the best way to convince them that we are as serious about our new line of Ultimate Steakburgers as we are about our pancakes, was to change our name to IHOb,” Brad Haley, chief marketing officer, said in a statement. “We’ve pancaked pancakes for 60 years now so it’s the perfect time to start burgerin’ burgers, and we’re kicking it off by flipping the ‘p’ in IHOP to a ‘b’ for burgers."

A flagship location in Hollywood, California, has been completely re-burgered (with the new signs as mentioned above) and will host a VIB launch party Monday evening. Additionally, IHOP’s new Ultimate Steakburgers are coming with unlimited fries and a drink, starting at $6.99, for a limited time at participating locations.

“Burgers are a quintessential, American menu item so it makes perfect sense that IHOP, one of the most iconic, all-American comfort-food brands in the world, would go over the top to create a delicious lineup of quality burgers that hit the spot any time of day,” chef Nevielle Panthaky, head of culinary added in a statement. “Our new Ultimate Steakburgers are made with all-natural, 100 percent USDA Choice, Black Angus ground beef that is smashed on the grill to create a sear that locks in the juices and flavor.”

IHOP is marketing the new burgers with an ad that places a manager atop the chain’s blue rooftop. There he risks life and limb to spread the word, as you can see below. It will air nationally on TV, online, and social media.

Droga5, an acclaimed ad agency IHOP partnered with to kick off its 60th anniversary, is directing the campaign and will have plenty of buzz to build off—perhaps more than the brand has generated in its digital history.

IHOP posted to Twitter and Facebook on June 4 that it was making the name change, and asked guests to take a guess. As of mid-afternoon Wednesday, the original tweet had more than 5,000 retweets, 11,000 likes, and, most impressively nearly 9,000 comments. It hardly slowed down from there.

Now the question becomes can IHOP translate this attention into visits and return visits? And, also, will burgers drive incremental business to its breakfast-heavy standing? IHOP, which has 1,791 units, reported 1 percent same-store sales growth, year-over-year, after comps fell 0.4 percent in Q4 versus the prior-year period.

At Dine Brands most recent investor day to close fiscal 2017, IHOP broke down its daypart traffic as follows: 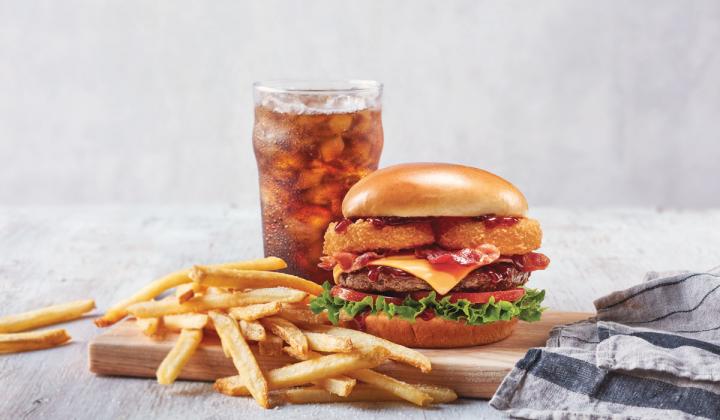 Meaning, half of the chain’s guest are younger than 35.

There’s undeniably some ground to make up in terms of innovation. You could surely say this was the move of a brand not afraid to take risks, meaning it was outside the box of what IHOP has been for decades, according to consumer sentiment. Being “cool and up to date,” is another slot this promotion fills, or could fill if it has the intended effect.

IHOP has made other moves to this effect, including a Rise N’ Shine Remodel program intended to drive up average-unit volumes and reinvigorate older locations.

“Based on guest feedback … and focus groups, they told us that our pre-remodeled restaurants were feeling outdated and a bit dragged,” Rebelez said in April. “The remodel program has helped to successfully reshape the consumer experience with a layout that feels more inviting but being open and cheerful. The modern décor also helps the brand until useful and our restaurants more welcoming.”

Franchisees completed 46 remodels in the first quarter of fiscal 2018 and IHOP expects to finish about 275 this year. Since the program’s inception, more than 660 units, or 49 percent of the domestic system, has been remodeled.

On the technology side, IHOP unrolled a passport feature to its mobile app that allows guests to take pictures of its internationally inspired packages for perks. This resulted in downloads of the app more than doubling. IHOP also said recently it’s entering into a strategic relationship with Comcast to upgrade WiFi at all restaurants—a move expected to be completed by year’s-end.

IHOP launched its to-go platform nationwide in mid-November. The IHOP ‘N GO platform includes online ordering, a mobile app, and delivery in some markets. To go accounted for 6.5 percent of total sales at the end of the first quarter, up 150 basis points compared to the same quarter last year. Average check on online to-g orders was tracking about 36 percent.

“In today's world, dinning and technology go virtually hand-in-hand,” Rebelez said. “Technology influences how and where we decide to dine. With that in mind, we're focused on engaging our guests both inside and outside our restaurants through an omnichannel experience.”

"Based on the social media buzz, local news coverage, and word-of-mouth it has earned so far, the IHOb campaign has been successful at generating awareness of IHOP's new Ultimate Steakburgers line of hamburgers. That's quite valuable," he said. "The campaign is more of a brand stunt than a brand equity-building campaign. The campaign is purposefully using brand confusion to induce incredulity in the minds of consumers who in turn are using their mouths and fingertips to express their disbelief, scorn, and bemusement at the brand name change, albeit a temporary one. It certainly has people talking—for now. Whether it creates a sustained lift in lunch and dinner sales for IHOP over the long term remains to be seen."