IHOP is IHOP Again, Leaving IHOb (But Not Burgers) Behind

The IHOb experiment is over. IHOP officially flipped its name back to the traditional moniker Monday (July 9), nearly a month removed from its social-media busting June 11 announcement. IHOP took to Twitter and Facebook again to break the news, saying on Facebook: "We're giving away 60¢ short stacks on July 17 from 7a-7p for IHOP's 60th birthday. That's right, IHOP! We'd never turn our back on pancakes (except for that time we faked it to promote our new burgers).”

IHOP also left behind its IHOb Twitter handle, saying “Hey ya Pancakes. Don’t follow us here. We’re @IHOP now.” IHOP removed the temporary IHOb logo from its website and swapped the old-school one back in.

IHOP is now IHOb, and Burgers are the Reason Why

We Asked Restaurant Professionals What They Think of IHOb. Here’s What They Said

The initial move was far from a rebrand. It was meant to drum up interest about the company’s launch of Ultimate Steakburgers. And create interest it did. Within a week, more than 3,000 articles were written on the marketing maneuver. More than 8 billion impressions hit the Internet. IHOP even held the No. 1, No. 2, and No. 4 trending spots on Twitter all at once at one point on June 11.

An IHOP in Hollywood did flip its imagery. And IHOP launched a commercial campaign to tout the burger focus. But the company said throughout the process that it wasn’t abandoning its breakfast focus—this was merely an interlude to spotlight something different, a product IHOP invested serious time and commitment into.

“Our breakfast focus is always going to be there. But we are still conveying that message that we’re taking our burgers as seriously as our pancakes. And the food is every bit as good with these burgers as it is with any of our breakfast foods,” IHOP president Darren Rebelez told FSR at the time.

According to YouGov BrandIndex data, reported by Business Insider, 19 percent of U.S. adults said they talked about IHOP before the IHOb move. After the change, it bumped up to 30 percent, the highest score since late 2012.

"When we launched our new Ultimate Steakburgers last month, we were blown away by the public's reaction to our IHOb campaign since, ultimately, it demonstrated how much love there is for the IHOP brand and our pancakes," he said. "Millions and millions of people had a lot of fun 'blaying' along with the idea of flipping the 'P' in our name to a 'B' and guessing what the 'B' could be. However, we are, and always will be, the International House of Pancakes, and for our 60th Anniversary, we're giving our guests the gift of a short stack of our world-famous buttermilk pancakes for just 60 cents.  And now, you can also get some pretty great burgers at IHOP, too. Or, if you're like me, you can order pancakes as a side option when you buy any Ultimate Steakburger at IHOP so you can truly have the best of both worlds."

IHOP was founded in 1958 by brothers Al and Jerry Lapin in in Toluca Lake, California. It has since expanded to more than 1,750 franchised locations, with another 85–100 expected to open in 2018. As mentioned in the Facebook post, IHOP is celebrating its 60th anniversary with 60-cent pancake from 7 a.m. to 7 p.m. July 17 at participating restaurants nationwide.

In addition to driving up interest, however, the IHOb switch was intended to accelerate sales into a sagging daypart. The announcement came with a $6.99 deal that included a drink and unlimited fries. 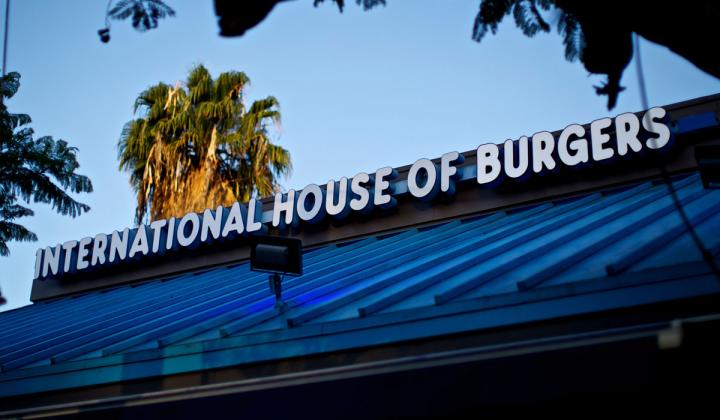 International House of Burgers. For about a month, IHOP boldly changed its branding in some spots.

“We think this has a lot of legs to it. Here are a couple of reasons. One, this isn’t an LTO for us. This is a permanent part of the menu. And you’ll see that when you go into the restaurants. It is a permanent part and the way we view this is this is the first step that we’re taking on really building that lunch and dinner business for the long-term. That’s why we invested so much time and energy in making sure we got the product right and the launch campaign,” Rebelez said.

It was also intended to help buoy IHOP’s off-premises business.

“We launched our meals to-go platform in Q4 of last year, enabled that with an online ordering platform, and our new mobile app that enables the online ordering. Now we’re in the process of testing delivery with a few providers. The preponderance of delivery orders and off-premise dining occasions is really in the lunch and dinner daypart, more skewed toward dinner. So we think that burgers are a great option for that dinner daypart. People can always get our breakfast food anytime of the day. But as they start to shift their focus more on savory traditional lunch and dinner type of items, we think this fits very well with that,” he said.

At Dine Brands’ (also the parent company of Applebee’s) most recent investor day to close fiscal 2017, IHOP broke down its daypart traffic as follows:

In the past three years breakfast sales have risen by 4 percent in 2015, 2 percent in 2016, and 1 percent in 2017. So IHOP really had a lot to gain by trying to infuse some traffic into its lunch, dinner, and to-go segments.

Rebelez said the IHOB campaign also illustrated to the brand how strong its standing with consumers really is.

“This is something that we always knew. If you work or have worked for IHOP, you’ve had this experience. You meet somebody new and you tell them you work for IHOP and the first words out of their mouths are, ‘Oh, I love IHOP.’ That’s kind of a universal thing. We always experience that and we know there’s this love for IHOP. But when you go through a process like this you really get to see just how beloved of an America icon IHOP is. It’s really gratifying to be able to see that love come to life in such a big way,” he said.