What does the B stand for? That is what we're all wondering right now.

IHOP is Changing its Name to IHOb. Really?

The Dine Brands chain isn’t saying until June 11. The only hint: The brand is flipping the “P” to a “B.” IHOP becomes IHOb. International House of Bacon? Biscuits? Breakfast? Butter? Details are currently scarce, but IHOP has made two things clear. For starters, this marketing maneuver, whether a short-term stunt or actual branding change, isn’t a flash-pan move. IHOP has had an IHOb Twitter account since July 2016, and it’s already verified.

60 years later, IHOP is bringing the pancakes to the people

Can Applebee's and IHOP Return to Casual Dining's Summit?

It seems unlikely IHOP would change its name for good, especially considering the equity involved, not to mention what flipping signage and materials at 1,791 restaurants would run franchisees and corporate. As CNN points out, there are no live trademark requests for IHOb currently with the U.S. Patent and Trademark Office. There are two expired filings for barbecue concepts, though. And a WHOIS search for the IHOB domain returns to a registrant saying “Data Protected Data Protected.” No phone number and a Toronto mailing address of 123 Data Protected.

The other sure thing: IHOP has definitely generated buzz from the promotion. As of mid-afternoon Wednesday, the original tweet (see below) had more than 5,000 retweets, 11,000 likes, and, most impressively nearly 9,000 comments. 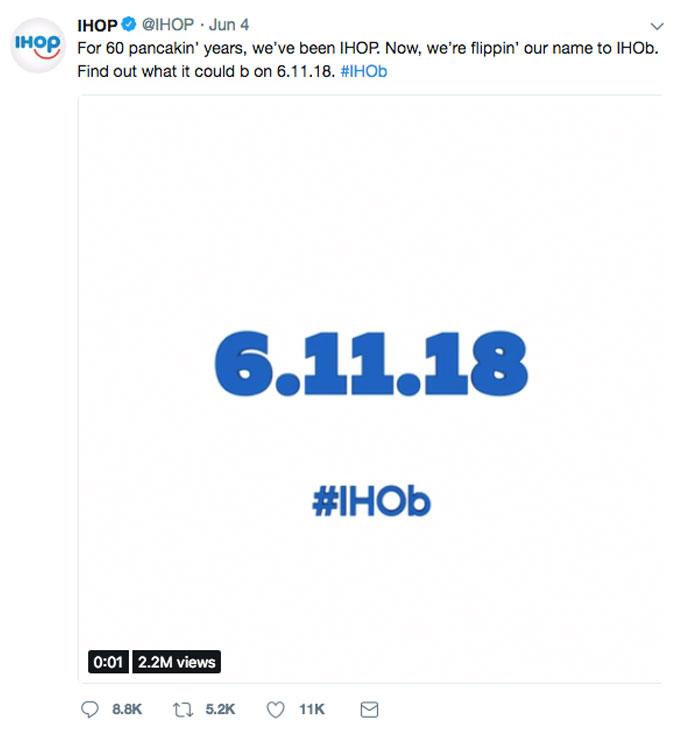 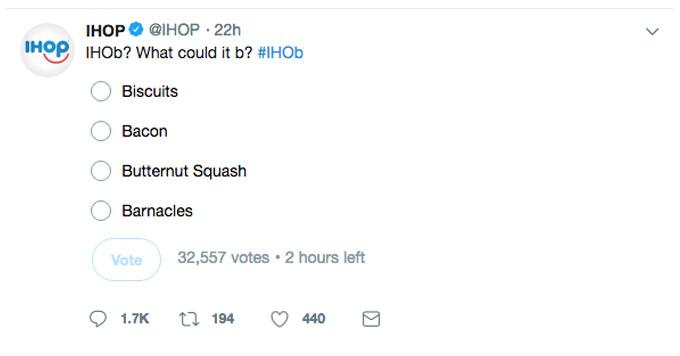 The fun continued with a poll—biscuits, bacon, butternut squash, or barnacles?

The timing aligns with IHOP’s 60th anniversary. The company opened its first restaurant outside Los Angeles in the summer of 1958. IHOP began the 2018 calendar by launching a “Pancakes, Pancakes, Pancakes,” campaign with acclaimed agency Droga5. So it would seem odd that the chain trying to push its pancake prominence would cut pancakes from its name.

Brad Haley, the former CKE Restaurants (Hardee’s, Carl’s Jr.) CMO, who joined IHOP last August, said in February that IHOP was “bringing the fun back to the brand that hasn’t been there for a long time.” The IHOb campaign surely breaks from the sterile mode of many companies this size. We’ll just have to tune in on June 11 to see if the buzz measures up to the bite.

IHOP, like Dine Brands’ other concept, Applebee’s, started fiscal 2018 on a positive note. It reported 1 percent same-store sales growth, year-over-year, after comps fell 0.4 percent in Q4 versus the prior-year period.