Hurricane Grill & Wings is on the move.

The chicken-wing chain was founded in 1995.
November 2017 Danny Klein

Hurricane Grill & Wings, a 60-plus-unit chicken-wing chain founded in 1995, has entered into a definitive agreement to be sold to FAT Brands Inc. for $12.5 million. The company, which stands for Fresh. Authentic. Tasty., is funding the acquisition with cash on hand and third-party financing, and expects to close on the deal this year.

FAT Brands is a global franchising company that acquires, markets, and develops fast casual and casual dining brands. Its portfolio includes Fatburger, Buffalo’s Café, Buffalo’s Express, and Ponderosa & Bonanza Steakhouses. Together, FAT Brands operates about 300 locations around the world, as well as 300 additional units under development in 32 countries. 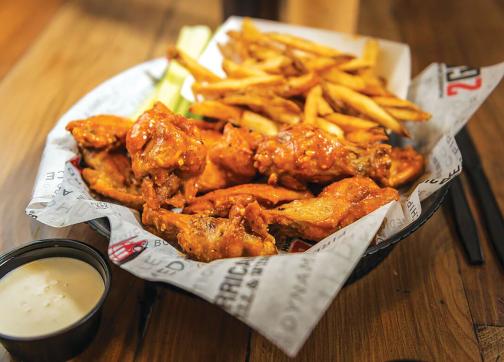 FAT Brands’ November purchase of Ponderosa and Bonanza also came at a low price. The company paid $10.5 million for the two chains, established in 1965 and 1963, respectively, and their more than 120 locations worldwide.

FAT Brands said it plans to use Hurricane to complement its Buffalo’s Café brand by leveraging its signature, tropical American atmosphere. This gives FAT Brands more than 75 combined chicken-wing-themed restaurants in the southeastern U.S.

“Hurricane Grill & Wings possesses an ambiance that appeals to a broad consumer-base, and we are thrilled to have identified this concept which shares our passion for providing guests with an all-American experience through high-quality, made-to-order meals,” said Andy Wiederhorn, president and CEO of FAT Brands, in a statement.

“Based on our expected free cash flow in 2018, we expect to pay an annualized dividend of $0.48 per common share starting in 2018, subject to the declaration and approval by the board of directors, which represents an implied yield of approximately 5 percent based on the current share price,” Wiederhorn said.

At the time, Hurricane said there were 15 BTW units on the development board and more than 100 planned for the not-so-distant future. How this deal effects that growth plan is unclear. BTW aims for a $10 check average with a focus on wings, burgers, and tacos.

“We see Hurricanes as a wonderful complement to our Buffalo’s Cafe and Buffalo’s Express brands, and look forward to expanding the brand’s footprint in both new and existing markets through our extensive franchisee network. Their new fast casual brand Hurricane BTW (burgers, tacos and wings) has a significant franchise development pipeline and will nicely diversify the company into more fast casual venues,” Wiederhorn added.

In March 2016, Hurricane, coming off a record year of growth and its first breaking the $100-million mark in sales, announced it was expanding globally. That February, the chain opened its first concept outside of the U.S. in the suburbs of Milan.

Hurricane opened 12 new stores in 2015 and signed a company-record 10 multi-unit development agreements. It also agreed to open 25 international restaurants beginning with Milan and sprouting in Austria, Germany, Poland, and Switzerland over the next six years.

Hurricane is known for its jumbo fresh wings, with more than 35 signature sauces and rubs. The brand’s signature Rum Bar with over 21 premium rums leads its tropical drinks menu, along with a wide selection of craft beers and wines. The original Hurricane Grill & Wings opened in Fort Pierce, Florida, in 1995 and has expanded to locations in Alabama, Arizona, Colorado, Florida, Georgia, Kansas, New York, and Texas.