TGI Fridays hosted an all-day Happy Hour to celebrate the longest day of the year on June 23. This is just one example of the kind of forward-thinking promotions the brand deploys.

Through social media and unorthodox deals, the casual dining leader is leveraging customer engagement to keep diners tuned in and coming back.
August 2017 Danny Klein

There aren’t many restaurants on the planet that would trade an appetizer for an emoji. Welcome to just another afternoon at TGI Fridays.

Caroline Masullo, the vice president of digital and e-commerce at the 500-plus-unit chain, says it wasn’t that long ago when the brand decided to take a helicopter look at its ROI. While it might seem unwise, maybe even a little crazy, to offer Endless Apps for $10, or give away ribs for Twitter interactions during March Madness, TGI Fridays realized the game had changed.

The brand’s most valuable equity was no longer measured by day-to-day purchases. Rather, in a casual dining industry strapped for traffic, TGI Fridays recognized it was time to lean on engagement.

“I think we recognize that our customers love our food and love our drinks. And what better way to start that authentic conversation than over something that’s really stress free,” she says.

For a snapshot, traffic across the restaurant industry plummeted 4.7 percent in July alone, according to industry tracker TDn2K. In 2016, year-to-date traffic fell 3 percent in casual dining compared to just a 0.8 percent drop for all of 2015.

Perhaps trading that appetizer for a penny and football emoji, as TGI Fridays did during the Super Bowl, looks a little more appetizing now. Is such a deal worth a loyal guest, though?

That question is something Masullo says the brand looks at through a different lens. The reality, she says, is that TGI Fridays, which began in 1965, has plenty of fervent fans. And its reputation as a lively, bar-forward concept is something guests relate to and want to engage with.

“It’s important for us to be really consistent from a personality and conversation perspective across our social platforms, just in the same way our employees engage with our customers in the restaurant,” Masullo says. “As long as we’re consistently providing that Fridays vibe—that is what’s bringing our customers back to us and also continuing to engage with us on our platforms. We’re very responsive, but we’re responsive in a non-corporate way.”

TGI Fridays realized instantly that social media could be a powerful tool. But to keep that brand message in line, and constantly humming, the chain produces all of its digital content in-house. The result is a social media presence that lives and breathes in real time. It responds and interacts with guests. It pushes promotions, menu items, or just simply spotlights its guests.

A post in early August showed a picture of diners holding scroll-like receipts after a night of Endless Apps. Again, at $10, how did this equation calculate exactly?

It’s about fostering and fueling a network that’s far more sustainable. Doing so has also spun a rotating door of ideas that not only encourages return visits, but keeps guests plugged in at all times.

For example, during International Beer Day on August 4, TGI Fridays created a Facebook page called Beer Lovers Unite at Fridays. Its purpose was to unite fans and employees from the U.S. to the Philippines at one central hub. Bartenders and beer connoisseurs from TGI Fridays around the globe continuously posted content. Guests also used the page to chat and chime in, fueling a user-generated campaign that leveraged TGI Fridays’ expertise in the bar realm as well as its willingness to let its diners have a voice.

This joined a series of Twitter polls asking questions such as “Which describes you on #InternationalBeerDay?” Or “What do you think our recommended appetizer pairing would be alongside a crisp, cold Bud Light?”

How TGI Fridays develops these ideas is a multi-tiered process, Masullo says. Mostly, it operates and grows organically, but if “we think there’s something that has some really good legs behind a post or two, that’s certainly something we’d pull in other areas of the marketing team and see how we can build on it,” she says.

“Our social team, that’s 100 percent internal,” Masullo adds. “In terms of the transparency and visibility and real-time nature of having that team right here and responding 24 hours a day, it’s important. We can spitball new content and create the content in-house. That gives us a lot of ability to test and learn quickly, and also collaborate and make sure we’re all on the same page in terms of what’s going on in the U.S. that would be interesting from a conversation standpoint, and then certainly how can we leverage what’s going on in our brands from a new product standpoint, or just kind of new news that we want to ideate our together.”

TGI Fridays gleans knowledge from these interactions. Some promotions are built from understanding the true relationship the brand has with guests, Masullo explains.

It’s one reason why you’ve seen such seemingly radical ideas come out of their headquarters in recent months.

On Wednesday, TGI Fridays revealed its latest addition to the Burger Bar menu, a new section that debuted in February. The brand started by sharing five burger concepts on social media and asking guests to choose. The result? An overwhelming win for the Mac & Cheese Burger, complete with crispy macaroni and cheese, beer cheese sauce, and spicy mayo. Since TGI Fridays introduced the Burger Bar menu, the chain has reported a 15 percent increase in burger sales, it says. Given the anticipation  surrounding the Mac & Cheese Burger—before it even hit restaurants—it wouldn't be surprising to see that sales uptick continue. And TGI Fridays got there without harnessing traditional advertising outlets. The interest was generated within its base.

The brand also announced the arrival of its new Pink Punk Mojito, a drink topped with cotton candy that melts in front of the imbiber. 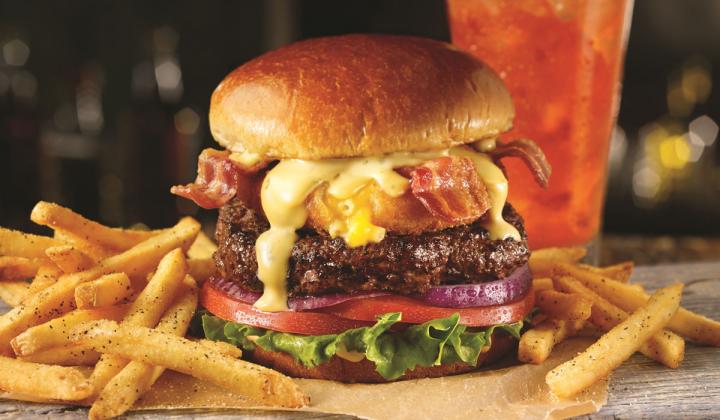 TGI Fridays' Mac & Cheese Burger was a hit before it even reached the menu, thanks to customer engagement and social media.

TGI Fridays hosted a 16-hour Happy Hour on June 23, just following the summer solstice, to celebrate the longest day of the year.

Just in time for Valentine’s Day, TGI Fridays announced it signed up to become the first national casual dinning chain to join OpenTable. At the end of January, the chain also revealed it was accepting orders via Twitter—also a first for a national bar and grill.

Before that, in December, TGI Fridays partnered with FandangoNOW to offer dinner and a movie. For every online order of $25 or more, guests received a free movie rental.

As for the Endless Apps, which were honored by an Endless Happy Hour in New York, if that promotion doesn’t scream social nothing does.

The mid-February announcement was supported by a national television campaign and remains a constant source of social media noise.

"TGI Fridays provides the ultimate social bar vibe where our guests can unwind and reconnect over an array of Endless appetizers or one of our new all-natural, custom-cooked burgers,” said Matt Durbin, TGI Fridays vice president, marketing and concept development, in a release at the time. "

“I think what’s cool about being a brand that has great bar equity and food equity is that you can really play into those distinct audiences in terms of tailoring content around their specific likes,” Masullo says. “It’s really fun for us to use the different platforms and start to really dig into the data and understand why all of our wine lovers live versus our mixed drink lovers versus our beer lovers and then tailor our conversation to get really specific and authentic against those specific areas.”

Masullo says the “ah ha” moment arrived when TGI Fridays realized it didn’t need to deliver its brand in sales-pitch format all the time. If the chain engaged around its food and drink from a user-generated perspective, “a more real perspective,” guests would start connecting the dots. “That’s when our customers come into the restaurant and feel that what they’re seeing from us cross channel is actually the experience they’re enjoying in the restaurant,” she says. “That has a lasting effect.”

This extends to employees as well. The social aspect allows TGI Fridays to spotlight its own people, either through posts, Instagram stories, and more. But it also creates a work culture that promotes transparency, which also comes across to diners.

“People really like to get that glimpse behind the scenes of who are these people who work at this really fun brand. And that has worked really well,” Masullo says. “It’s real people. We’re a real brand. These are the bartenders that actually work at Fridays. People can definitely connect with that.”