Applebee's just reported its best sales performance in 25 years in 2018.

How Restaurants Can Win the Next Wave of Off-Premises

Delivery. To-go. First, it was all about getting onboard. Now, it's time to thrive.
March 2019 Gary M. Stern

Ordering food today at a sit-down restaurant plays out in a multitude of ways, including ordering by phone; by kiosk or tablet; having food delivered by third-parties such as Uber Eats, DoorDash, Grubhub, and Seamless; and curbside dining that enables customers to order, pick up and be home, with little time to spare. Some eateries are even exploring providing their own delivery to cut out the middleman, but that’s a costly and often too-complicated endeavor.

Many millennials are looking for “convenience, simplicity, ease of payment, and getting the product they ordered served accurately and hot,” Reinstein says. But that can be easier said than done when full-service restaurants are under economic pressure, face rising labor costs, and are forced to curtail staff, not hire more of them.

Interestingly, people who order by mobile, tablet or phone, without interacting with a waiter, are actually ordering more food, often as much as 10 percent more, Reinstein says. Without the pressure of showing restraint to another person, guests order whatever they want, without fear of judgment. The mobile app is triggered to ask follow-up questions and promote upselling, such as do you want avocado with your sandwich, which drives higher check and leads to added revenue. Most employees, including those who take orders via phone during busy shifts, are pressured to move quickly and are more concerned getting customers off the phone than they are trading them up, Reinstein adds.

But for most full-service eateries, this quickness and ease of delivery create logistical and staffing issues. “The footprint of the restaurant isn’t set up for delivery in large numbers. Most rely on makeshift areas.  And restaurants have to invest in technology to make sure the orders are accurate, and packaging to make sure the food is served hot,” Reinstein says. 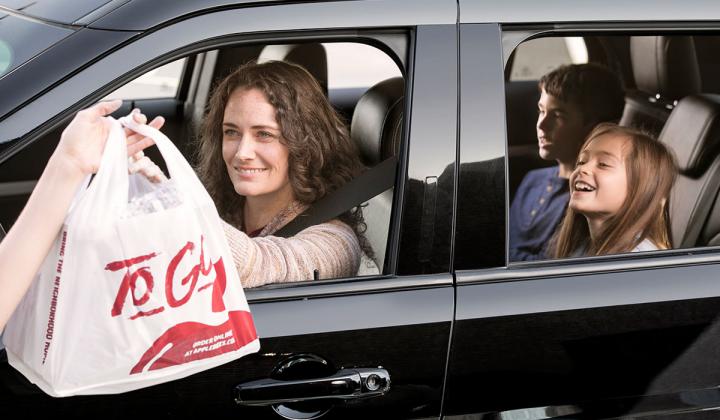 Carside to-go is nothing new at Applebee's.

Much of the strife in delivering food reaches its crescendo at lunch. “It’s much more chaotic at lunch, with a much shorter window,” because most guests are pressed for time and want to return to the office or work pronto, Reinstein says.

Moreover, Reinstein says, when restaurants focus on making sure delivery functions smoothly and assign additional personnel to meet demand, other areas of the restaurant may falter. At certain restaurant chains, “it’s much harder to get a server,” and getting the food to the table has slowed down considerably.

At some restaurant chains, where the kinks haven’t been ironed out, delivery leads to inaccurate orders, and because packaging wasn’t strengthened to keep track of demand, the food arrives soggy or cold, frustrating customers and denting guest sentiment.

However, times are changing. When many new restaurants are constructed, the design adapts to solve the reality of increased home delivery. Building much larger take-out areas and designing separate areas in the kitchen are some of the adjustments.

At Applebee’s, with 1,875 global outlets, including 1,690 in all 50 states with 69 company-owned and the rest franchised, delivery isn’t anything new, says Scott Gladstone, its Glendale, California-based vice president of strategy and development. It launched Carside To Go about 15 years ago. Customers can order food via phone or mobile app, which they pick up at the restaurant, and never have to exit their automobile. There are even separate parking areas arranged for Carside pick-up to quicken the experience.

“It meets customers’ need of speed of service and wanting to get in and out quickly,” he says.

Applebee’s introduced its new mobile app and website at the beginning of 2018. “It made it much easier for the guest to access the menu,” Gladstone says. In the third quarter, the chain’s off-premises sales spiked 30 percent. At the same time, Applebee’s introduced a new packaging line to “showcase the food better,” he says.

To ensure that everything flows between the kitchen and the guest, each Applebee’s assigns one, and sometimes multiple, Carside specialists. “They help answer the phone, take orders, package the food, and run the orders to the car,” Gladstone says.

Applebee’s also coordinates with several third-party delivery services such as DoorDash, Grubhub, and Amazon. These vendors integrated their delivery systems with Applebee’s point of sale to quicken pace and lessen any chances of inaccuracy. Currently, close to 1,100 Applebee’s offer delivery (most are on DoorDash, but this includes some local partners). Applebee’s anticipates covering 1,500 units eventually, or basically the entire system.

Asked if Applebee’s has ever considered eliminating the middleman and providing its own delivery services, Gladstone says it’s “evaluating different types of delivery models, but the economies are somewhat challenging.” He’s referring to the need to buy or lease automobiles, hire drivers, and deal with liability insurance.

Ensuring customer satisfaction for Applebee’s entails making sure third-party deliverers live up to expectations. “They own a big piece of our guest experience, and we want to ensure that they deliver a great Applebee’s experience to our guests. We had to develop that muscle,” Gladstone says.

Innovation is also critical to providing improved service in an age of new styles of delivery. For example, Applebee’s has a partnership with Xevo, which powers an in-dash marketplace in automobiles, enabling guests to order food on their dashboard, and with Home, a Google-owned company, which allows customers to order food by voice activation.

Ten years ago at Red Robin and its 570 locations in the U.S. and Canada, the brand was a restaurant destination, especially for guests visiting malls, says Jason Rusk, its vice president of business innovation, based in Greenwood Village, Colorado. “Over time, as Amazon, Netflix, and binge watching took hold, consumer behavior changed, and they expect to get things everywhere they are,” he says.

Red Robin’s revamped to-go program includes delivery and caters to consumer demand. On one hand, the gourmet burger chain has doubled its off-premises sales to about 10 percent of its overall revenue and believes it can do so again in the next three years. Red Robin has grown its off-premises business from 5.4 percent in 2016 to 9.9 percent in 2018. 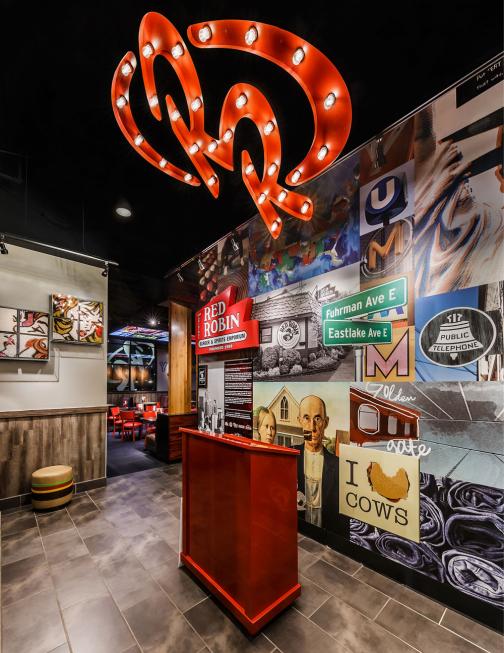 By the third quarter, Red Robin will launch a new online ordering system that is far more intuitive than the current one, executives said. The goal being to increase the volume of online orders and improve conversion.

But the growth hasn’t always been easy. Red Robin’s dine-in traffic slid a bit in 2018—4.2 percent year-over-year—and led the company to reassess some of its operational checks. Were guests inside the brand’s four walls hurting from off-premises attention? For a period, Red Robin admitted they were. Wait times rose and guests weren’t being seated according to chain standards. CEO Denny Marie Post said after Red Robin’s fourth-quarter report that all of those setbacks were being addressed. Some changes included value deals (a $10 bundle) exclusive to dine-in guests; and reprioritized training that focuses on the basics of restaurant execution and fundamentals of leadership. That includes training Red Robin’s host and off-premises specialist to manage the dynamic of multiple revenue streams at the front door.

Organizing all of these options involves two major facets, Rusk says: how do you operationally as a restaurant execute all of these delivery options, and from a consumer’s viewpoint, how do you make it easier for them to gain access and get their needs met?

“For consumers, the three most important factors are accuracy, timeliness, and temperature,” Rusk says.

To make it easier on staff, Red Robin simplified menus, reduced complexity in the kitchen, and introduced call centers to expedite take-out orders.

Exceeding customer expectations when they come in for curbside dining or delivery has been another goal. To surprise guests, Red Robin offered free French fry cups to go, which has doubled customer satisfaction ratings for delivery, Rusk says.

In many ways, things haven’t changed in 10 years, says Rusk, who has been with Red Robin for 21 years. “You must meet customer expectations, whether it’s dining in or off-premises dining,” he says.

In his consulting works, he makes these recommendations repeatedly: One, do a thorough evaluation of your labor and who does what in home delivery. Two, dedicate a separate area for home delivery and curbside dining; squeeze it in if you must. Three, install as many kiosks and tablets as possible to expedite ordering and reduce the need for added personnel. Four, assign a supervisor to oversee navigating the food from the kitchen to the third-party delivery service. And five, buy food that bests fit for increased take-out. Buying cut-up broccoli crowns may be more expensive, but can save money long-term because it speeds up the process.