How Growth-Minded Famous Toastery Learned from Past Mistakes

When it comes to restaurant closures, Famous Toastery CEO Robert Maynard couldn’t be happier to talk about it.

“I think a lot of folks like to avoid this stuff and like to tell you how they're growing all the time and everything's great and the truth is, especially in franchising, stuff happens and it's how you handle them that makes the difference,” Maynard says.

After reaching roughly 35 stores in 2018, the breakfast chain has slimmed to 26, including a franchise bankruptcy that resulted in the closure of three stores in North Carolina’s Triangle market. A franchise hasn’t been sold since before 2019, back when the chain first realized “things were getting a little weird.” That includes the opening of 14 restaurants in one year, which the CEO described as “just too much.”

Maynard says one of his errors was he never fathomed an operator spending hundreds of thousands of dollars without listening to what the brand has to say, but that was the case with Famous Toastery. Then certain thoughts flowed through his head, such as “maybe these guys know more than me” and “they’ve owned restaurants before, so they don’t want to do as much training.”

The CEO continued to convince himself that it all made sense. He started negotiating with what he believes needed to happen, and that was a mistake. The company realized operators “bit off more than they can chew,” they weren’t properly communicating when certain things weren’t going well, and even paid themselves too much.

“To be very honest, we didn't do a great job when we first started opening locations of laying the law down,” Maynard says. “We were much more loose. We were a new brand. We were learning as we went at the time. I wanted to make everybody happy, and at the end of the day, the way you make everybody happy is that everyone is doing well. So if you have a franchisee that's new, that's not following something or not going to want to follow something, he's going to screw it up for the rest.”

He promises those same issues won’t happen again as the brand looks to sell eight to 10 deals in 2022 and open about four or five restaurants next year. Long-term, the goal is to reach 50 locations by 2024.

Of Famous Toastery’s 26 stores, 20 are owned by franchisees. Four of those franchised restaurants are operated by CFO Adam Gordon and executive chef Julio Heras. Maynard says several current franchisees are looking to open locations and sign leases, with multiple deals pending. The same is true for the pipeline of external operators.

The strategy is to saturate the Carolinas, Virginia, and Tennessee. Despite the bankruptcy in 2019, North Carolina will be a priority, including Charlotte, the Triangle (Raleigh, Durham, and Chapel Hill) and the mountains.

“The mistake we made was just not being tough on the way things were run and the brand standard,” Maynard says. “We're not worried about re-entering the [Triangle] market. We got 110 percent confidence in the market, and we have a store that's still [in the Triangle]. It does really well.”

The approach to expansion, however, is much clearer and straightforward, Maynard says. The CEO refuses to meet with anyone who doesn’t align with the breakfast brand’s expectations, like requirements for training and how long an operator is expected to remain in a store.

“If people are looking for me to tell them how great it is, how you can build all this wealth, which you can, we're not that group,” Maynard says. “We're going to tell you how you may get divorced and lose all your money because this is not an easy business.” 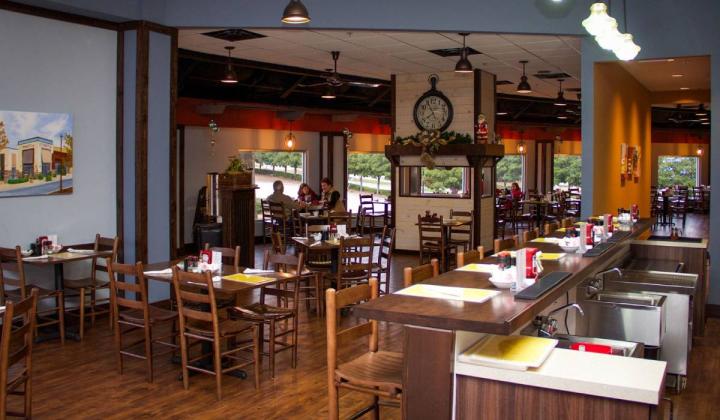 The CEO emphasizes that he’s not a fan of just blaming a franchisee, and recognizes much responsibility comes from the top. To better address the situation from the company side, Famous Toastery recently hired Michael Mabry as president to take the reins on development and training. The industry veteran has previously worked as director of franchise operations for Brinker International, director of franchise development for Boston Pizza, president and COO of MOOYAH Burgers, and chief development officer of Fuzzy’s Taco Shop.

Maynard says the improved infrastructure is part of a continued effort to place franchisees in the forefront, a mindset the company has maintained throughout COVID. Like most franchise-led restaurants, Famous Toastery forgave royalties for several months, and when it was time to pay again, dues restarted in small increments.

In addition, the company, which foresaw oncoming labor shortages and inflation thanks to its involvement in real estate development and finance, advised operators to delay store openings. Maynard says he’d “rather people be successful tomorrow than get that royalty today.”

“We can't just go and buy our way out of bad stores. All this stuff could have been kept quiet if we just said we’ll just go and we'll buy it, sell it, buy it, sell it,” Maynard explains. “But you know what, what am I going to do? I'm going to buy a store that somebody beat up already, has horrible morale, and then what? Give that to somebody else? It's just not the right thing to do.”

Maynard says Famous Toastery has been ready to “hit the button” for almost two years now. After cleaning the system, the first quarter of 2020 was the best in company history, but COVID occurred shortly afterward and the chain focused on pivoting to QR codes, online ordering, and limited menu items.

The chain is now in a place where it can step forward, but the CEO is adamant about not going “through the bad to get to the good.” He will seek like-minded individuals, and on the simplest level, it’s those that recognize restaurants are a human-to-human business.

“You've got to connect with your local people,” Maynard says. “You’ve got to see them in the local supermarket. You're going to be seeing them at the soccer games with your kids. You've got to be community-driven. It's not [quick-service restaurant]. It's not fast casual. It’s casual dining. Breakfast is habitual, and a lot of these folks come in three or four times a week. So you've got to be in, and that's one of our things is that if you want to be out, that's not going to work. And we tell people straight up—this isn't for you. You'd be better off at another brand.”