Servers need to learn about FiRE + iCE's desserts and appetizers. But there isn't an encyclopedic menu to memorize, which speeds up training and improves customer service.

How FiRE + iCE Grilled One of the Industry’s Biggest Challenges

With the national unemployment rate averaging 3.9 percent over the past four months—20 states showed 3.6 percent in July alone—restaurants are facing sharp recruiting and retention issues. In some ways, underemployment is the new unemployment. As Darden chief executive Gene Lee puts it, there’s a “war on talent” separating the brands able to capitalize on improved consumer confidence and those who can’t keep frontline employees, and thus pay the steep price in traffic.

According to the Bureau of Labor Statistics, the Hospitality and Food Services sector has an annual turnover rate of 73.8 percent, with over 6 percent of staff leaving every month. A study by Cornell University’s School of Hospitality Management pegs employee turnover costs for hospitality companies at an average of $5,864 per employee. TDn2K’s latest Workforce Index reported that 74 percent of brands experienced increased recruiting difficulty for hourly employees during the last quarter. Also, 59 percent said recruiting for managers is becoming more difficult. “A factor behind this increased recruiting difficulty is that the industry continues to expand. The number of chain restaurant jobs has increased by 1.7 percent year over year during the last two months,” TDn2K said.

And then there’s FiRE + iCE, a three-unit concept headquartered in California that witnesses annual employee turnover rates between 10–25 percent. It boasts 46 percent gross margins, on average, at its restaurants, and gross sales of more than $3.1 million. Given the typical costs of hiring and onboarding new workers—this varies but can run between $2,000–$4,500 and above—the ability to retain employees is allowing the brand to think big in terms of growth. Satisfied and tenured workers are providing better service than mercenary employees, and the bottom-line reflects that. Perhaps even more extraordinary, Kacee Colter, the chief operating officer of FiRE + iCE, estimates that one in every three employees who leave for other restaurant jobs actually come back in hopes of being rehired.

Colter believes this nearly mythical dynamic is fueled by the uniqueness of the concept. The brand, founded in Boston 21 years ago, currently has locations in Anaheim and South Lake Tahoe, California. Essentially, it’s an interactive model where guests grab ingredients off a raw bar, fill up a bowl, and then hand it over to a grill cook to be prepared live on a 9-foot grill in the middle of the restaurant. The cook will prepare multiple meals at once, like the create-your-own stir-fry concepts you see around the country.

Colter is a long-time industry professional, owning a handful of Baja Fresh stores. So it’s easy for her to see quickly why the FiRE + iCE setup generates industry-defying figures on the labor front. In a word, it’s simply less stressful. 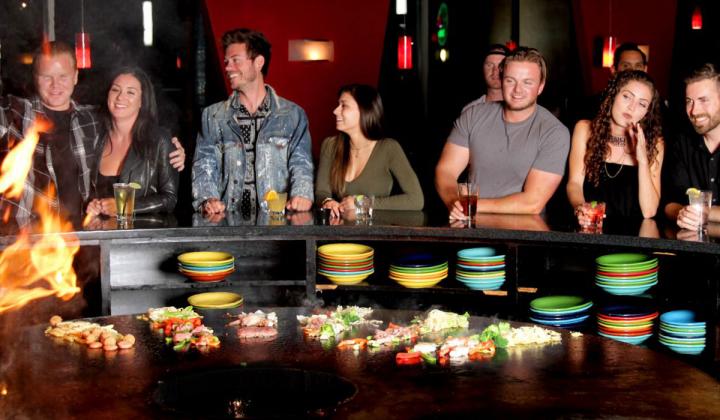 FiRE + iCE's grill is the centerpiece of its restaurants. It also helps servers, back-of-the-house staff, and inspires cooks to feel like rock stars.

To start with servers, they don’t run food from the back to the front of the house, unless it’s appetizers or desserts. They’re mainly tasked with guest interaction and education. Servers refill drinks. Bus plates. Give tours to first-time customers in regards to how this concept works. There isn’t really a menu and it’s a one-set price.

“They just need to learn the drink menu and appetizer menu,” Colter says. “And we’ve got a couple of desserts. So the onboarding for that process is not as intensive as The Cheesecake Factory, where you’ve got a book of menu items and you’ve got to know everything.”

“Our training is really around taking care of the guest,” she continues. “It is knowing what’s on the market bar, knowing what our sauces are. What’s vegan. What’s gluten free. That type of thing.”

This quickens training considerably and lowers the cost and risk. But even more so, Colter says, it’s just a laid-back atmosphere compared to the typical full-service grind. If a large table walks in, there’s no reason to slam the panic button.

The benefits extend to the back of the house as well. There are usually three or four people in the back and they’re mostly concerned with prep. They learn to make signature sauces, some basic culinary skills, and are asked to dish out, as noted before, just appetizers, desserts, and stock the ingredients bar. “It’s not having to look at a prep book or a recipe book, and try to learn 100 recipes,” Colter says. “So that’s where we luck out, too. It allows us to focus on the important part and that’s making sure that everything is fresh. Everything is delicious, and that we’re concentrating on the guest experience.”

With the structure, FiRE + iCE doesn’t hire a head chef. There’s a kitchen manager. And outside of the managers, GMs and such, there’s no hierarchy among staff.

Colter says servers do quite well with tips, despite the changed workflow. Guests tip as though they’re rewarding the entire staff, she explains. And servers can work far more than the typical four-table section.

“They still show with their money that the server and bartenders, everybody is worth tipping out,” she adds. “Everybody gets the benefit from it. The guys in the front will give money to the guys in the back. It just works.”

Perhaps the most unique angle of the operation is the grill cook. Colter says there are probably four who joined when she did nine years ago, and haven’t left. None of them came from restaurant backgrounds. One worked at a movie theater.

Yet the nature of the demonstration cooking of guest-picked ingredients is something FiRE + iCE can teach far easier than menu execution to specific dishes. And beyond that, it’s as much personality driven and culinary skilled. They learn tricks. Talk to guests. It’s not a cooking role for everybody, she says, but for those that embrace the style it’s unique enough to inspire real longevity. 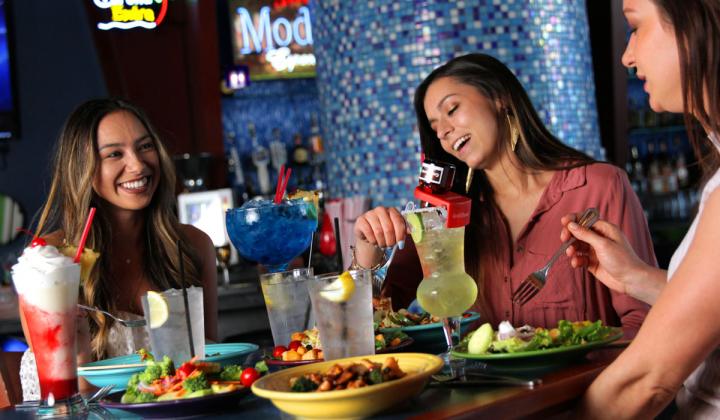 The experience-driven nature of FiRE + iCE has been a hit with guests of all generations, from millennials celebrating special occasions to families looking for an entertaining night out.

It’s a much different dynamic than the line-cook positions in common fast-placed kitchens, which can be anonymous and thankless in nature at times (although worth noting that’s appealing to many). Colter says the job is actually the hardest to hire, since it needs to be a cultural fit. What FiRE + iCE does is bring grill cooks in for a paid three-day trial. If it’s not for them, they walk. If it is, they tend to stick around. “Years and years,” Colter says.

FiRE + iCE will typically have 15–16 people working a restaurant on a busy night. The smaller Tahoe unit has four servers while the larger stores will have seven or so. This allows them to take six to seven tables at a time and make a solid living.

In terms of growth, Colter says the path forward for FiRE + iCE is franchising, with a focus on high-tourist areas where customers are looking for an experience. “We don’t believe, right now anyway, that there should be a FiRE + iCE on every corner. You’re going to go there for birthday parties. You’re going to go there for special occasions. When you’re traveling because there’s not one in your city,” she says. “Our focus is going to stay on those rich tourist markets.”

Colter is a managing partner at Adventure Investments Group, LLC. The ownership group started as a franchisee nine years ago with the Anaheim location. They acquired the South Lake Tahoe store, the franchise company, and trademarks, and are the drivers behind future growth. Better Way Franchise Group, who has partnered with FiRE + iCE, announced in July the launch of a nationwide franchise program to expand the concept.

Ryan Combe, managing partner of Better Way Franchise Group, says that FiRE + iCE is a restaurant that provides more than just food. So it requires a customer base that’s looking for something beyond just a meal out. The current locations fit that bill. For example, most people aren’t headed to Lake Tahoe or Disney Land trying to land the everyday experience. “That’s a big part of this,” he says. “We’re an experience in these locations where people are already migrating looking for experiences.”