How East Coast’s Relationship with Franchisees Sparked a Turnaround

The brand has seen positive growth in July and August after an early rollout of a COVID operations model.

Before the COVID crisis officially hit the U.S., East Coast Wings CEO Sam Ballas spoke with a group of CEOs and told them his brand was planning for a 50 percent reduction in traffic.

But Ballas and his team watched carefully in January and February as countries overseas wrestled with COVID. The Winston-Salem, North Carolina-based brand received assistance from other restaurants that have international exposure, and the company came across additional data that suggested the pandemic in the U.S. was going to be more significant than anticipated.

In early March, Ballas scheduled an emergency meeting, and the chain started developing a COVID business model for franchisees. The CEO explains that typically, corporate includes sufficient data and precedent to back up its plans. But there was no blueprint for handling a global pandemic of this magnitude. As he phrases it, “you had to go with gut instinct.”

“[Franchisees] were told that early [March 9] that we’ve got a storm coming, and we’re planning for the worse-case scenario,” Ballas says. “… We basically told them, you’re going to have to take this trust relationship we have to another level. Because we can’t come and give you an operation model that is proved. We can’t give you an operations model that’s been validated because nobody’s operated, in my lifetime, in a pandemic like this.”

On the evening of March 17—the day North Carolina instituted stay-at-home orders—the model was deployed. Ballas says it took about 10 days for the nearly 40-unit brand to work out the kinks.

The strategy became fruitful as franchisees saw an upswing in April. Off-premises business increased approximately 55 percent at one point, and sales turned positive year-over-year in July and August. Ballas says some longtime stores saw record months compared to a year ago.

In March, April, and the first weeks of May, three executives split duties of checking on franchisees. Each day they asked, “What’s going on?”; “What’s your health department telling you in your state?”; “What’s the process?"

Meanwhile, Ballas says he coached some brands as late as April 30 that didn’t have a call with franchisees. Instead, they were emailing in a “CDC format” with copied and pasted information.

“If our franchisees didn’t have trust, and if the brand didn’t have the philosophy that we’re laser-like focused on—and we never ever jeopardize our philosophy even if it comes down to slowing growth—if those two mechanisms didn’t gel together, we would’ve had the same headaches you read about in the newspapers and you hear about on TV that some of the other restaurants chains have gone through or are going through,” Ballas says.

Ballas notes some have told him that if East Coast were around 80 to 100 units, it wouldn’t have had the ability to shift operations so quickly.

But the CEO challenges that mindset because he thinks it’s small-minded for any C-level operator to view his or her restaurant that way. He firmly believes that if the brand maintained its disciplined philosophy and dedication to unit level economics, the chain would’ve had the same results no matter the size.

“My department would have twice as many people in it to function that philosophy and that discipline,” Ballas says. “… Granted, if you’re 2,000 locations, there is a breakage point of what can you manage and how fast you can manage it no question. But the average franchise model in the country is sub 100 locations. I think if we were double the size, we would’ve been just as effective with our franchisees.”

East Coast’s rise during the pandemic has been aided not only by its modified business plan, but also a number of initiatives it instituted before COVID even existed. 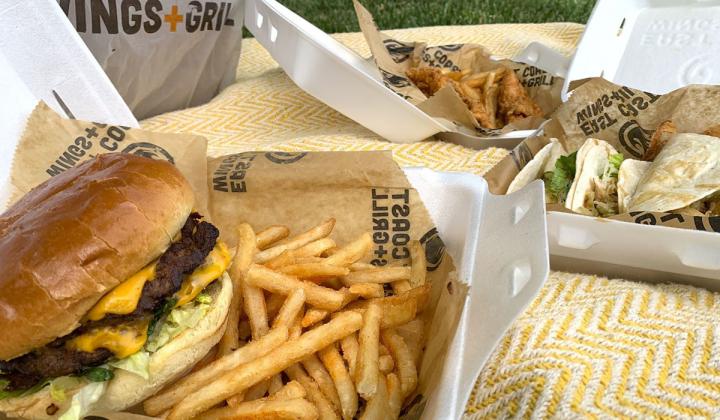 Seven stores are coming in 2021 for East Coast Wings.

Four and a half years ago, Ballas—who has a Certified Commercial Investment Member designation—started studying the real estate market. He noticed a trend in which rates were quickly increasing and leases were moving toward a 10-year minimum. At the time, East Coast had a roughly 4,500 square-foot store design, but the brand started reengineering the model in both decor and size.

The company tested 3,000 square feet, and East Coast soon realized the smaller stores were able to maintain sales. Other locations underwent remodeling, and new stores have been dubbed 2.0. There’s one store opening soon that’s 2,300 square feet with 80 seats. Because of the foresight, franchisees were able to pivot much easier during the pandemic, Ballas explains.

Additionally, two years ago East Coast began toying with pay-at-the-table features. It was launched last year on a voluntary basis, and due to the emphasis on contactless payment throughout the crisis, all stores will be required to have the option.

The challenge is leveraging all of those plans to retain the off-premises bump. Part of this involves redesigning hostess stands and bars in future stores to create a different carryout mechanism and asking landlords for designated to-go parking spaces.

“If you as a brand can let your dining room scale back up at its pace and you can retain 15 percent, 20 percent, 12 percent, 8 percent, whatever the number is, of your off-premises gain you had during the pandemic, what will your model look like from a year from now? It’s going to be stronger,” Ballas says. “Your franchisees will be stronger. But you have to have compelling data of how you did that. You can’t just hope it’s going to happen.”

He adds that when the restaurant had enough data to validate a trajectory that’s healthy enough for potential investors, it was ready to enter the marketplace. It’s resulted in more franchising activity in one month than the brand saw in all of 2019.

Ballas doesn’t expect the industry to return to normal until the middle of 2021. But when it does, he’s confident that East Coast Wings will be a prime destination.