How BJ's Blazed its Way to Casual-Dining Royalty

The 202-unit chain is on a quest to become the 'best casual-dining concept ever.' Results prove BJ's is on the right track.
August 2018 Danny Klein

There’s a lot to chew on in regards to BJ’s Restaurants’ stunning turnaround. Perhaps one figure, though, paints the story best. In the third quarter of fiscal 2018—the casual chain’s most recent report—its slow-roast menu saw a 16 percent rise in orders versus the prior-year period. This thanks to a near doubling of BJ’s prime rib and double bone-in pork chop entrees.

As you can see by the chart below, BJ’s same-store sales have tracked red-hot recently, punctuated by Q3’s 6.9 percent boom—the company’s best in the previous 29 quarters. Headed into November (when BJ’s reported its Q3 results), BJ’s shares surged nearly 115 percent on the stock market. The rest of the industry on average: 17.2 percent. 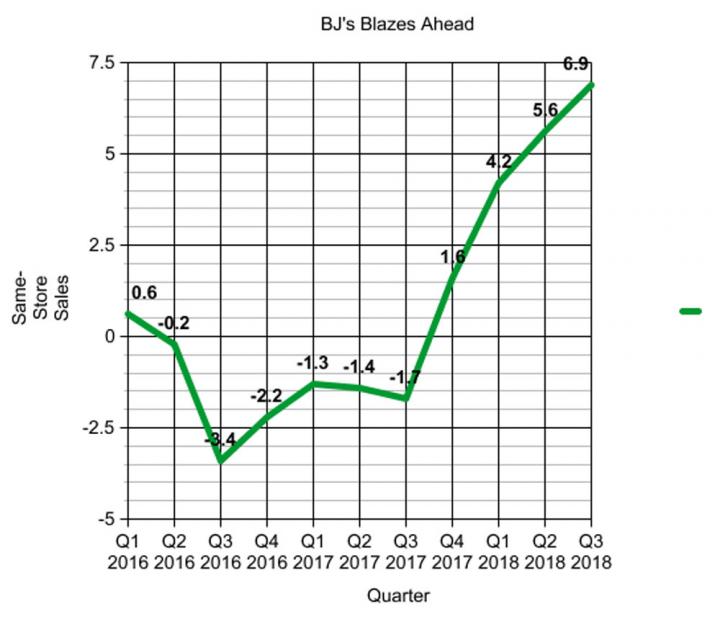 Here’s why the slow-roast note is so crucial. There are a lot of ways to accelerate comps—heavy discounting, trimming a system by removing low-performing stores, taking price into the menu, etc. Adding slow-roasting ovens and pushing a restaurant’s menu into more premium territory isn’t typically one of them. That was one of those long-term flips, from a capital, training, and execution perspective, BJ’s needed to hit on. And it surely appears the 202-unit chain found pay dirt.

In Q2 of 2017, BJ’s completed the rollout of the new equipment associated with slow-roast entrees. The transition, disruption, and expense, along with start-up costs and operating inefficiencies, resulted in additional investments in labor and cost of sales.

The Motley Fool called this an inflection point for BJ’s. Mainly, it was the crossroads in BJ’s performance where those broad changes started to weigh in. Not just slow-roast ovens, either. BJ’s invested heavy in handheld server tablets and delivery. To that point, there was no real way to know whether or not these operational fixes would strike a chord or fall flat. BJ’s employees had to master advanced cooking methods and become skilled in taking orders on the new devices. Management said at the time BJ’s was investing in value and customer traffic, and trying to drive its business for the long-term, and knew it wasn’t going to get margins back “right this minute.”

Fast-forward and BJ’s stock has since doubled, give or take. The 6.9 percent same-store sales mark, according to management, smashed sector averages by a full 5 percentage points. It outpaced Knapp-Track and Black Box by more than 500 basis points. Traffic growth of 2.6 percent topped peers by 3 percent.

You could break apart this run in a few pieces. Perhaps none more critical than guest satisfaction.

The handheld tablets greatly improved the time for a guest’s first drink or food item, CEO Greg Trojan said in BJ’s Q3 call. The order times improved customer experience “quite significantly.” Incidents of beverages, desserts, and appetizers also climbed. What the tablets didn’t really accomplish was speeding up table turns. While BJ’s would like to see that happen, the fact it hasn’t speaks to a larger success story playing out. “It just seems like the guest wants to have a social dining experience in our restaurant,” Trojan said.

The tablets have helped the loyalty program as well. Handhelds make it easier for guests and servers to exchange information. BJ’s upgraded Premier Rewards Plus loyalty program launched at all restaurants in February. The platform simplified BJ’s reward structure (guests earn points at a rate of 1 point for each $1 spent on food and beverages). It resulted in an increase in loyalty guests, both in signups and the percent of checks, the company said, which is helping stabilize traffic.

“In today's world, where everyone is pressing a larger level of guest check growth, let's face it, to offset inflationary pressures, everyone in our industry is under more pressure to provide a guest experience that's worth that guest check. And I think that given the concept that we have, we have the ability to drive some check growth to pay for that inflation in a way that people perceive as still has a great value.” — Greg Trojan, BJ's Restaurants' CEO. 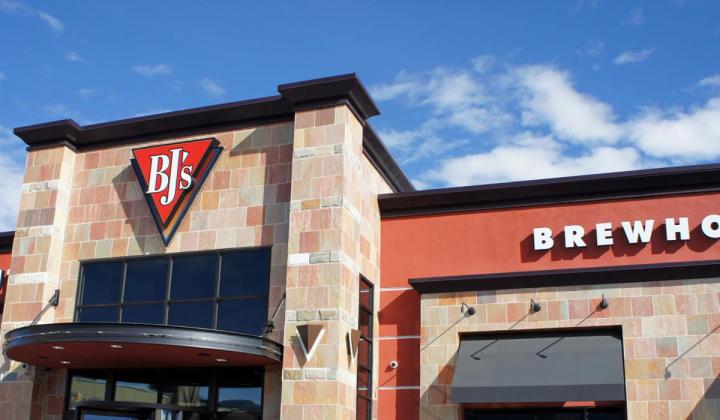 Promotions and loyalty have played a key role in BJ's run.

These industry-busting numbers at BJ’s show serious staying power, too.

BJ’s put value into its menu with lower-priced happy hour offerings and weekday Brewhouse Specials, but was still able to drive healthy check growth through positive mix of its slow-roast menu, menu pricing, and continued moderation of its dollar-off discounting activity. The hike from slow-roast items was generally offset by Brewhouse Specials, and this is a formula working to top-line perfection at BJ’s. The chain is getting customers to take more items, which are driving incident rates up. And those incident rates plus a touch of discounting moves the overall check up. BJ’s expects average check growth to be in the 3 percent range next year.

And much of this strategy also comes down to understanding its guests. BJ’s drives 25 percent of its business in the mid-afternoon and late-night, and, in response, courts those consumers with alcoholic offerings and happy hour deals. It’s why the slow-roast, abundant platform made long-term sense: It met the BJ’s customer where they already were. And also why a mid-afternoon value option was the ideal high-low complement.

Given BJ’s strong California footprint (63 units), the overall balance in its cost efforts remains crucial. The company will absorb another state minimum wage increase in the near future, as well as continued wage pressure due to historically low levels of unemployment. BJ’s believes it will see wage increases in the mid-4 percent range for hourly positions moving forward—a consistent number in 2018.

“I would expect that labor will be difficult cost to leverage both for us and the industry at large,” BJ’s CFO Greg Levin said in the chain’s Q3 call. “And just to remind everyone, the best way to leverage labor is to drive top-line sales. As we said many times at BJ's, we are sales builders first and foremost, and if we're going to err, we're going to err on the side of building sales, so that we can deliver more profit dollars to the bottom line and leverage the many fixed costs across our business.”

BJ’s isn’t near saturation when it comes to growth. The concept has long said there’s national capacity for 425 restaurants.

So, clearly, no matter how you cut it, BJ’s mined operational gold across several fronts when it decided to rework its business and take a short-term blow. And the execution has been enviable, to say the least.

Let’s break down some other points: 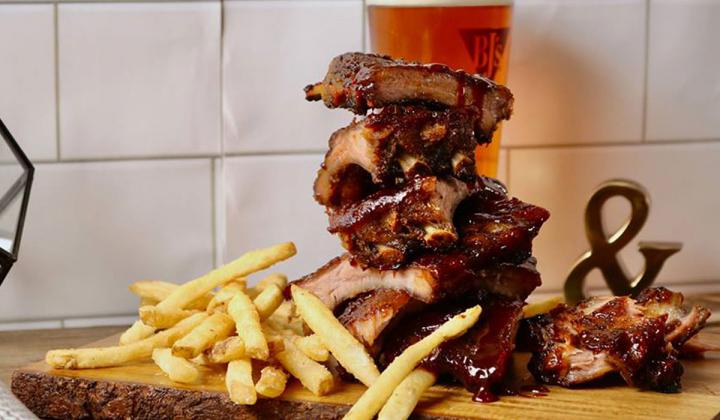 BJ's has struck a menu balance that works for its guests.

Results always come back to value and execution. When asked how BJ’s is separating from the casual-dining pack, Trojan credited those foundational factors. What’s driving broad-based improvement in BJ’s business is traffic. And that’s far from an easy task in today’s restaurant space, where many chains are leaning on pricing to offset traffic drops. As a whole, comparable traffic declined 2.17 percent for the restaurant industry in October, according to TDn2K. It’s down 1.43 percent in the rolling three months. October’s decline was a 0.8 percentage point dip from September and the weakest month for traffic growth since May.

“In today's world, where everyone is pressing a larger level of guest check growth, let's face it, to offset inflationary pressures, everyone in our industry is under more pressure to provide a guest experience that's worth that guest check,” Trojan said. “And I think that given the concept that we have, we have the ability to drive some check growth to pay for that inflation in a way that people perceive as still has a great value.”

He said BJ’s is driving higher net promoter scores even as it sets sales records and becomes more efficient with new sales channels, like large carryout and delivery orders.

Menu wise, it’s a balance of value and innovation. BJ’s expects to leverage its EnLIGHTened category (healthier options) and invest in the expansion of its slow-roast oven capacity. This will allow BJ’s to accommodate higher sales volumes with today’s product lineup and develop other protein-centric menu offerings. For perspective, BJ’s set 42 daily sales records and 23 weekly sales records in Q2.

Expanding those menu successes need to be measured against complexity.

“We're always looking at ways to reduce complexity … and we'll balance any new product introduction with where we can,” Trojan said. “And we think it's prudent trimming the menu in other places or generally keeping in balance. What we don't want to do is to have that slow growth to increasing complexity overall.”

BJ’s Brewhouse Specials—weekly promotions that change by the day and special occasions (10 loaded burgers on Wednesdays, $3.14 for mini pizzas on this year’s Pi Day for example)—are helping the chain drive frequency to different dayparts while improving those aforementioned customer satisfaction scores.

Trojan said marketing research led BJ’s to take a more targeted approach through loyalty and other digital channels. It also pushed select increases in traditional media, primarily TV in its more highly developed markets, which drove new levels of awareness, trial, and frequency, he said. There’s room to grow. “However, we still lag our larger mass market competitors when it comes to general awareness measures. We are confident that continued strategic marketing investments represented an important opportunity to narrow that gap and drive guest traffic,” Trojan said.

The chain expects marketing spend in Q4 to be around $7.3 million, and that's compared to $5.9 million in last year's fourth quarter. Greg Levin, BJ’s CFO, said the lift “is related to media production costs that we will be able to leverage over the next 12 to 18 months, as well as marketing to support the growth of our off-premises business and additional media in select markets in this fourth quarter.”

In the last three or four years, the vast majority of BJ’s development has been outside of its core markets, particularly California, Texas, and Florida.

“We've been doing quite a bit work this year on testing different media forms and ways to go about driving awareness in some of these newer less dense developed markets for us that—where we can't efficiently look to mass media to drive that awareness,” Trojan said.

BJ’s is focused on the next generation of local marketing in those stores. In the “reasonably developed markets,” BJ’s looks to digital media and spends that are closer to mass media mediums.

Off-premises sales increased to 8.7 percent of BJ’s revenues this past quarter—a record number for the company. About a year ago, off-premises accounted for about 5 percent of BJ’s sales. It expects to grow this channel by at least 50 percent over the next several years.

Trojan said these numbers are still infant figures. “Importantly, we've only began to leverage our menu variety through large party take-out and delivery channels, and as such we're confident in our prospects for driving continued sales growth in these areas,” he said.

BJ’s collaborated with DoorDash and even launched alcohol delivery last August in select markets. Trojan said BJ’s has continued to see off-premises growth after lapping that third-party push. Additionally, the cannibalization of take-out has slowed. And take-out remains a much bigger business than delivery.