CEO and founder Robert Thompson said the smaller footprint was inspired by the opportunity as well as the demand.

The new 12,500-square-foot location is set to debut in December in Fort Worth.
June 2018 Danny Klein

Punch Bowl Social said the restaurant would feature two bars instead of three, and duckpin bowling—a game with lighter pins. It will also allow Punch Bowl Social to target smaller markets where a larger build-out didn’t make sense financially before.

CEO and founder Robert Thompson said the smaller footprint was inspired by the opportunity as well as the demand. “We’re continually fielding requests from developers and other interested parties to bring Punch Bowl Socials into their cities,” he said in a statement. “We’re known for bringing jobs, tax dollars and, often, other businesses that move in around us when we serve as an anchor tenant. It was important that we take our time to conceptualize what a smaller sized Punch Bowl Social might look like to ensure it would still feel and operate like the larger models, providing a full experience just in a smaller space.”

Like other Punch Bowl Social concepts, the store will feature a refreshed menu curated by James Beard Award-winning chef Hugh Acheson, as well as a craft beverage program, and other social activities that have made it a hit with millennials, like Ping-Pong, Skeeball, darts, board games, video games, and more. 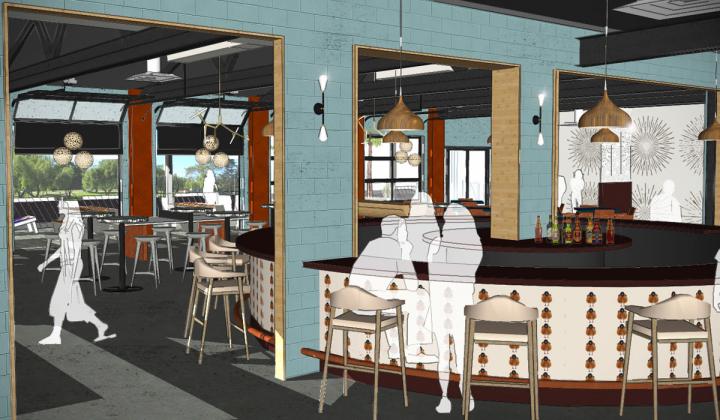 Punch Bowl Social's core elements will still be on display in the smaller unit.

The brand launched in Denver in 2012 and has expanded to 14 cites, including: Chicago, Atlanta, Detroit, Minneapolis, Indianapolis, Cleveland, Sacramento, and San Diego. The Fort Worth store will be Punch Bowl Social’s fourth planned Texas property. An Austin restaurant opened in 2014; Dallas is on the schedule for November; and a second Austin unit is up for early 2019.

L Catterton, the private-equity firm that helped capitalize chains such as P. F. Chang’s, Anthony’s Coal Fired Pizza, and Chopt Creative Salad Company, invested in Punch Bowl Social in June 2017. At the time, Punch Bowl Social said it planned to double its footprint in the coming years. Most of the intended growth will be with the larger-footprint units, with two set for the 12,500-square-foot build.

Thompson said the West 7th opportunity helped fine-tune the design. “Fort Worth was too good of an opportunity for us to pass up,” he added in a statement. “It’s a fantastic city with a well-known cultural scene. Add in everything that’s happening along the West 7th Corridor and we knew we had to be here. I can’t think of a better place to launch this newest iteration of Punch Bowl Social.”

The move to smaller restaurants is becoming more common with “eatertainment” chains, notably in the case of Dave & Buster’s. The brand announced last December that it was working on a 15,000–20,000 square-foot design to help expand the brand into markets it couldn’t reach before, and that it sees potential for 20–40 in the future. The first iteration—in Rogers, Arkansas—opened in the first quarter of fiscal 2018 at 17,000 square feet. The next is coming to Corpus Christi, Texas, later in the year.