Golden Corral's Renaissance Has Been One for the History Books

The buffet is witnessing double-digit sales increases, renewed franchisee growth, and recognition from its employees as a workplace of choice.

Golden Corral CEO Lance Trenary couldn’t be prouder of how his brand climbed from the lowest depths of COVID, and he isn’t the only one who feels this way.

The industry veteran received the International Foodservice Manufacturers Association’s 2022 Gold Plate Award, joining past winners such as Danny Meyer and Wolfgang Puck. For Trenary, the award didn’t speak to anything he did individually. It was more so a representation of the rollercoaster Golden Corral experienced over the past two-plus years, and showcased the resilience of team members, perseverance of franchisees, and loyalty of customers.

“The emotions were so strong because after the last two years and what our company has been through, for us to be recognized was just really a validation of all the hard work and effort and just the way that our team has risen to the occasion,” Trenary says. “I really saw it as an award for the entire Golden Corral system. And what I've told my team is that my name is on the plate, but this is a Golden Corral Golden Plate Award.”

The roughly 360-unit chain is seeing average weekly sales as high as $85,000 per store, compared to $65,000–$70,000 in the early part of 2021. Same-store sales are 30 percent above 2021 and about 3–5 percent better than 2019. The brand is even back on air with new advertising campaigns celebrating backyard barbecue and the idea of diversity and families coming together.

READ MORE: Golden Corral is Building for the Next 100 Years

Trenary attributes the comeback to Golden Corral’s strong value proposition, despite the volatile economy and historic inflation. The company has been “very judicious” about pricing and remains well below the industry average. When that’s combined with variety and abundance each day, Trenary says, “the customer figures it out really quickly that Golden Corral is where you’re going to get the best value for your dining dollar.”

Still though, he knows it’s up to Golden Corral to deliver that experience, so the brand has been intentional about not cutting back its offerings or reducing quality. The chain is constantly looking at “make” versus “buy” decisions, and Trenary says more often than not, the better products are scratch-made. With that in mind, Golden Corral still mixes its meatloaf, grinds meat, cuts steak, breads chicken, and spends 12 hours cooking pot roast.

The chain’s tagline is “only one for everyone,” and Trenary is determined restaurants stand by that claim.

“So the entire family can come to one restaurant, get what they like, whether it be salads or fried chicken or a steak or whatever it is, we have it all out there every day and only have to pay a fixed price that they're aware of ahead of time—I really like that from our position standpoint,” the CEO says. “It gives me good confidence for the future, and I think that's starting to reflect in our results and why we’re in many cases outperforming the family-dining segment right now.” 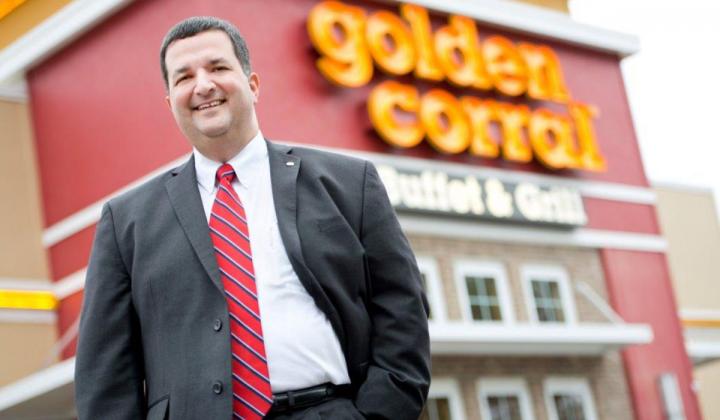 Although sales are on a positive trajectory, the pandemic did its damage on systemwide footprint. Across 2020 and 2021, Golden Corral closed a net of 124 restaurants, according to its FDD. But the situation appears to be turning around, with a “substantial number” of existing franchisees reinvesting in the brand, Trenary says.

One franchisee in Orlando is closing two of his highest-volume units and rebuilding one at the same site on International Drive and relocating another across the street. For operators at the sunset of their careers and ready to retire—a process accelerated by the pandemic—newer franchisees are picking up those locations and implementing remodels. Stores with Golden Corral’s Gateway redesign are seeing anywhere between 50–100 percent sales increases over 2019. The chain recently reopened locations in Greenwood, Indiana, and Ashland, Kentucky that are averaging $130,000–$160,000 in average weekly sales and maintaining those volumes, after doing $60,000–$70,000 prior to COVID.

Interest isn’t just coming from current franchisees either. Trenary says that for the past few months, his team has fielded several calls from new entities that saw what happened with the buffet segment and realize Golden Corral is the only one with a national footprint to really survive. As of now, there are five operators in various stages of signing up for new growth.

“What that tells us is that even during the toughest of times, we treated people the right way,” Trenary says. “We did things the right way and with integrity and full transparency of what the future held, and consequently we've been recognized as that. So those kind of things, along with the Gold Plate, did not hurt. We've actually had a lot of calls since then saying, 'hey, it's unbelievable what your company has accomplished and we want to be a part of it.'”

The CEO isn’t naïve when it comes to expansion. He knows there’s still a question mark around buffets, especially with inflation and labor shortages juxtaposed against how many products and staff Golden Corral restaurants require. So to make its franchise package more enticing, the brand is offering a new incentive that essentially provides cash back on food and labor costs on a monthly basis for up to three years.

“We’re saying, look we have great confidence in our brand, we have a 100-year plan,” Trenary says. “So it's not about how much money we make this year, it's about us being in business for 100 years, and so we want you to partner with us and we're going to put our money where our mouth is. We're going to take the unknowns or the uncertainty of the effects of inflation and workforce and the negative effect those potentially might have on a new entities’ P&L. We're going to take those off the table and give you the ability to establish your business and get to know our company and to see that this really is an incredible going concern.” 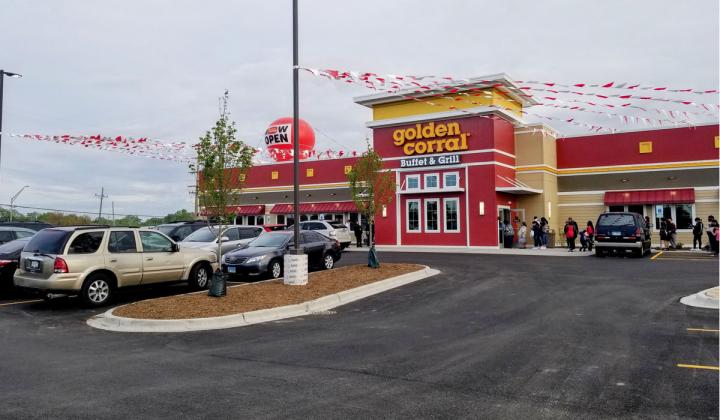 If all goes to plan, Golden Corral will have a lot more to offer franchisees than just a buffet in the coming years. G.C. Grill House, an entrée-driven steakhouse, is scheduled to open in July if everything remains on track. The menu will feature popular buffet items like fried chicken, pot roast, and meatloaf, and a salad bar—all at a value-conscious price  for guests. It harkens back to Golden Corral’s origins as a family steakhouse when it first opened in 1973.

The other upcoming prototype is a 3,500-square-foot fast casual with a drive-thru. Trenary calls it a “modern twist on comfort food,” like Nashville hot fried chicken and a pot roast sandwich. Better-for-you dishes will be included, as well. Golden Corral hired two design firms, WD Partners and Profitality to work through the prototype. The brand is about halfway through the design phase, which takes about 20 weeks. After that, the new model will undergo architecture and engineering and then permitting, meaning construction likely won’t begin until sometime in 2023. The exact name of the new store is also a work in progress.

“I think it gives us a new vehicle for growth that is not a buffet, but still closely related to Golden Corral,” Trenary says. “Enough that our most loyal customers will continue to eat with us and it’ll also attract our light or non-users because of the kind of offering that we're going to create with it.”

The innovation comes as Golden Corral approaches its 50th anniversary next year. The chain is in the process of planning its convention in February, which Trenary sees as an incredible feat, considering CNBC’s Squawk Box once referred to them as a zombie company.

It’s the way onlookers viewed Golden Corral and the buffet segment as a whole two years ago, but no longer, and that includes employees. In February, Golden Corral was named to Forbes’ list of America’s Best Large Employers. The company is continually working on child care and transportation assistance as well as ensuring wages remain competitive.

“At the Gold Plate [ceremony], I said, thank goodness that the good Lord above, that God loves a buffet,” Trenary says. “I'm glad that he's a buffet guy because he certainly has provided for us.”