Golden Corral believes the buffet will bounce back in America. And there's already proof it has.

Golden Corral is Building for the Next 100 Years

Challenged by COVID-19, the buffet giant tested a drive-thru, virtual brand, fast-casual spinoff, and much more.

For CEO Lance Trenary, that means the company will always make decisions consistent with it being in business for at least a century. There’s no short-term reactions, and no strategy will move forward at the expense of profitability.

The greatest test of that gameplan came in March 2020 when COVID shut down restaurants worldwide. A target was quickly placed on the backs of buffets because of shared surfaces, although Trenary believes the risk was unfairly portrayed due to a lack of scientific evidence. Yet the damage was done. In those early days, Golden Corral’s entire business model was essentially outlawed.

“It was some dark days very early on at the end of March and the first of April,” Trenary says. “We knew that our segments—that our company in particular—was going to be under enormous pressure, and I think that at that moment, we had to adapt a mindset that look, our business is going to be forever changed. Our business model will not operate exactly the same as it has in the past. But we are going to make it. We're going to figure out a way through this.”

Golden Corral is a 48-year legacy brand, but Trenary says the chain needed to adopt the mindset of a startup. Over the course of a year, it meant introducing drive-thrus, a virtual concept, fast-casual spinoffs, and smaller footprints.

But first, it’s important to lay out how Golden Corral put itself in position to initiate innovation. The chain began by internally focusing on cash management. There were existential threats, such as lease obligations, the brand had to work through. But the good news is Golden Corral has always been in a strong position. The chain was fortunate to have significant reserves on hand, and was able to leverage its longstanding relationship with lenders, landlords, and suppliers.

“That really was a big part of the early days—let's get our own house in order, make sure that we survive as a corporation, that Golden Corral Corp. is strong enough to withstand,” Trenary says. “We were hoping that we’d be in the end of the pandemic by the end of the summer, but of course we all know, it still goes on.”

That opening move allowed Golden Corral to give franchisees much-needed relief. The restaurant stopped collecting royalties in mid-March, and didn’t resume until the end of August. Even then, it was only 25 percent of what operators paid previously. The idea was to buy enough time as possible for recovery to begin. The average royalty rate is still 1.87 percent, compared to the usual 4 percent franchisees handed over pre-pandemic.

The next step was centered around executing the most profitable and guest-facing buffet given mandates allowed. That called for a meticulously compiled sanitation playbook viewed by many local and state governments as a gold standard. This meant putting the famed chocolate fountain behind a glass wall and changing utensils every few minutes. Golden Corral is also working on a prototype spoon in which everyone is able to use their own handle. 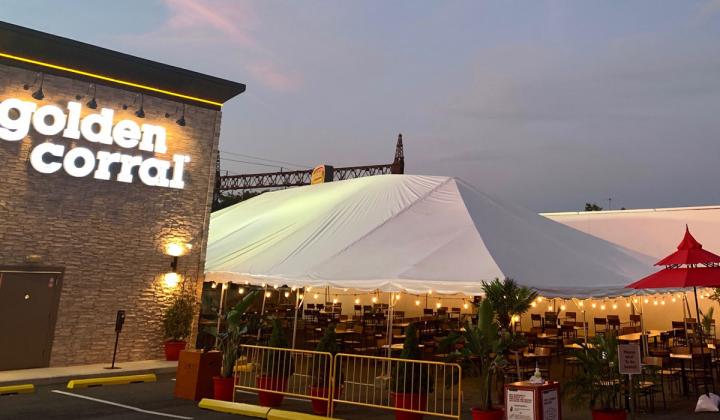 Golden Corral has had to get creative during COVID, to put it lightly.

Even today, there are still 16 states and municipalities that don’t allow the buffet. Trenary says 290 restaurants reopened and 250 are operating as buffets. The other 40 are using alternatives, such as cafeteria-style, which the CEO sees as inefficient and not as profitable—there’s roughly a 20 percent difference in revenue between a cafeteria-style and buffet location. Guests don’t like it as much, either. Some locations wouldn’t even allow cafeteria-style, so the chain implemented “buffet-to-your-table”—another challenged mode of operation, Trenary says. Another handful of restaurants are operating as curbside-only.

Golden Corral entered the pandemic with 490 stores, which means roughly 200 have yet to reopen. Trenary knows the chain will lose some of those permanently, especially the ones where the franchise agreement expired or they’ve simply run out of cash. But the CEO says it’s a small figure. Thirty to 40 restaurants are in various stages of ramping back up, so Trenary believes Golden Corral will return to 350 open venues soon. That includes the chain’s largest franchisee, 1069 Restaurant Group, which declared bankruptcy in October. The operator has since emerged and reopened two-thirds of its 33 restaurants.

AUV is returning as well. In the past 60 days, it’s approached $70,000 per week. More than 30 restaurants are earning more than $100,000 per week. Ten units have opened during COVID in places like Florida, New York, New Hampshire, South Carolina, and Puerto Rico. Trenary says despite limited capacity, many of the new restaurants are on pace to reach close to $6 million in annualized sales.

“So what that tells us is that the guest is absolutely embracing the buffet again,” Trenary says. “They missed us. Our most loyal guests, before the pandemic ate with us 70 times a year. Very few concepts have that kind of guest loyalty. They're coming back as quickly as we can get them in the door, and that’s great news. Unfortunately, we've still got these markets that we’re not even allowed to serve buffets. We're working with state governments and the health departments and trying to make sure that they understand our protocol.”

Turning to Drive-Thru and Fast Casual

Throughout the pandemic, Golden Corral devised “bolt-on” ideas, or strategies the chain can apply in addition to its pivots.

The most notable is a drive-thru. Customers drive up to a remote ordering board and are directed to a space where an employee will bring out food. Trenary says it’s not as efficient as a traditional drive-thru, but it does give an access point for customers to enjoy Golden Corral products if they don’t want to leave their cars. The amenity is not in many restaurants and different styles are being tested, so it remains a learning process. Golden is targeting a 3-minute delivery time, and for the most part, restaurants have met that goal, Trenary says.

“Most of our recipes are made-from-scratch products,” he says. “So it's not as easy as putting the sandwich together. But we've built our facilities to be able to accomplish this, and we're still testing it, still expanding it.”

Trenary refers to off-premises as an Achilles heel for buffet concepts because the channel isn’t inherent to how they operate. Before COVID, Golden Corral’s off-premises mixed about 2.9 percent, and the brand knew that had to change. The company partnered with Olo to develop a new online ordering platform, and the chain is using Punchh to roll out a loyalty program. Consequently, off-premises now mixes nearly 11 percent. 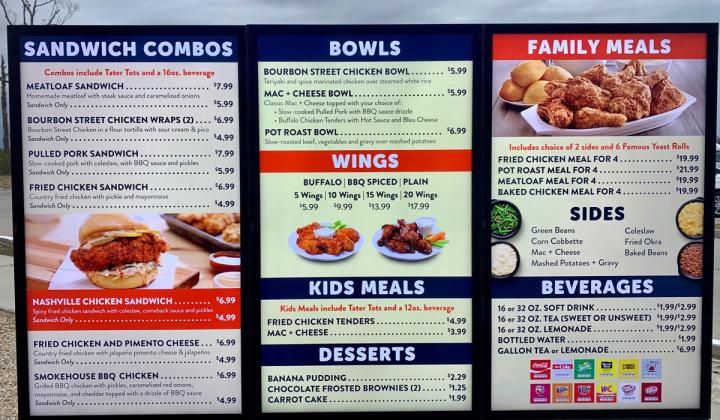 Golden Corral is looking at a smaller footprint concept with a physical drive-thru attached.

Some early adopters of off-premises are seeing the channel account for more than 20 percent of sales. That includes delivery, curbside, and “weigh and pay,” a system in which guests gather food, weigh the amount, and pay on their way out. Along the path, Golden Corral added pieces here and there to bolster the channel, such as geo-fencing, separate entrances, QR codes, and an awning over the drive-thru to cue customers where to go.

“Anything that we can do to basically scream that, hey, Golden Corral is not just to find an experience, we have all these other options,” Trenary says. “So we're really trying to build that part of our business, and we think that's going to be a forever thing. We don't think that's going to change. A lot of guests’ dining habits are going to be changing as we move forward. I think this is going to be a big part of that. Delivering craveable food with still great levels of hospitality is going to be critically important, but just doing it in different ways. Giving the guest access to our brand was core to some of these strategies.”

Golden Corral also introduced its first virtual brand, “Homeward,” which features fried chicken, meatloaf, braised beef, salad, bowls, sandwiches, and sides. It’s being executed in about 20 restaurants, predominantly in Chicago and the Midwest. Trenary explains Golden Corral is built to support such an endeavor since its buildings are more than 10,000 square feet on average.

In another few weeks, the chain will start serving alcohol—a big shift for the family-dining chain. The change won’t mean a full bar, but some selection of beer, wine, and frozen drinks like daiquiris or margaritas.

For markets that may never allow buffets again, Golden Corral is testing a fast-casual spinoff where customers can order a protein and two sides and have access to a salad bar. Several will begin operating sometime over the next quarter or two. In addition, the chain is looking at a smaller footprint concept with a physical drive-thru attached. 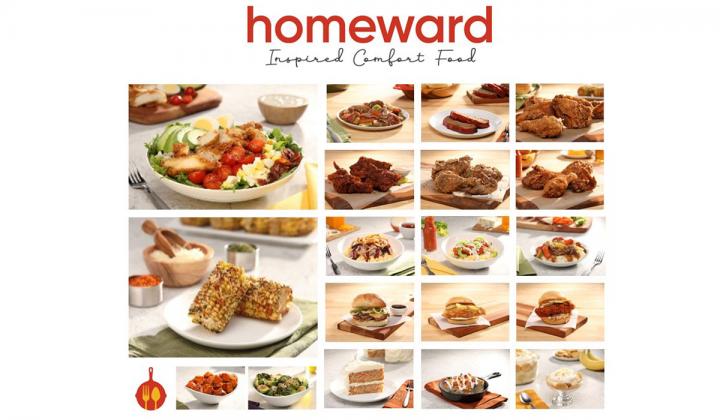 “It's not just throw a bunch of ideas against the wall and see what sticks,” Trenary says. “We're researching these. We're being very methodical about it, but we are moving with great urgency. We're not necessarily shooting for absolute perfection before we launch, but we do want great progress. We call it failing forward. We’re constantly failing forward. That's really the mentality that we've had to adapt to as being a learning organization.”

Trenary believes there’s still a place for buffet dining in the U.S., but these other evolving ideas are going to play a role in the company, as well. Once all the innovation is fully tested, Golden Corral doesn’t plan on stopping at 490—it has visions of reaching 750 to 1,000 stores. Previously, that would’ve been a difficult objective because of the necessary 10,000 square feet, 3 acres, and $4 million to $5 million investment. However, with smaller units entering the fray, there are more avenues for Golden Corral to expand.

The CEO says the Golden Corral team has a deep love for the brand, and will do whatever it takes to achieve their part of the 100-year plan. All the franchisees feel the same way.

“We do feel very bullish about the future,” Trenary says. “We think there’s great upside, perhaps not only in the buffet business, but also in the other innovation ideas that we're testing out and starting to see great results from. As I said before, we do know that Golden Corral’s forever changed.”