After the transaction settles, Glory Days hopes to grow along the East Coast between Virginia and Florida.

Two restaurateurs, including the cofounder of Outback, are taking over the sports bar and hoping to bring buying power, growth, and job opportunities.

Before Bob Basham cofounded Outback Steakhouse in 1988, he and Jeff Newman worked for famed restaurateur Norman Brinker at Steak and Ale in the 1970s. Basham later introduced his brother, Richard Danker, to Newman and Bob Garner. Those three came together in 1996 to open the first Glory Days in Burke, Virginia.

“I didn't really have any business partners,” says Danker, recalling the concept’s origin story. “I had two restaurants in [Washington] D.C. and was the entrepreneur mom and pop, and then Bob [Basham] from the corporate background, Jeff Newman and Bob Gardner were corporate guys, so it was a great mix and blend and we all learned from each other. It's been a great partnership.”

In the following 26 years, Danker, Newman, and Garner grew Glory Days to 40 locations across six states.

Basham rejoined the picture in 2013 when he became the Florida franchisee, although it wasn’t exactly a straight line. Outback started a chain called Leroy Selmon’s, named after the Pro Football Hall-of-Famer. Basham’s company MVP Holdings Tampa purchased the chain in 2008, but when Selmon died three years later, his widow didn’t want to be part of the restaurant business anymore. That left Basham looking for other options, and instead of transforming the handful of stores into a new concept, it was decided that Leroy Selmon’s would rebrand into Glory Days locations.

Basham built the franchise business alongside Carrabba’s veteran Jesse Mcpherson, who joined the leadership team in 2016.

Talks of selling the company began organically among the founders and Basham. Glory Days, Inc., the corporate entity, owns 22 stores in Virginia and Maryland, while Basham and Mcpherson operate 15 units in Florida and Georgia. The two sides felt there could be so much more buying power if all restaurants were housed under one roof. Plus, the ownership trio recognized Florida was growing at a quicker pace, which could present better opportunities for their own workers in the DMV market.

“We thought, well boy, Florida is a great opportunity," Basham says. "Gotten probably some bumps along the way in the last couple of years, but overall, we came out of it pretty well and the Virginia and Maryland markets, as well. There's a lot of people, a lot of income, and the demographics are very good up there. So we thought, well that would make sense if we combine it and give some opportunity. It was more about providing some opportunity for not only people up there, but some of our people down here, as well.”

A transaction was announced in late August, but a numerical amount wasn’t disclosed. New corporate entity Play Ball USA will oversee 37 company-run locations (inclusive of Glory Days, Inc. and the Florida/Georgia franchise footprint), in addition to three other franchises in the system. Danker is joining the new ownership team while Garner and Newman are retiring. 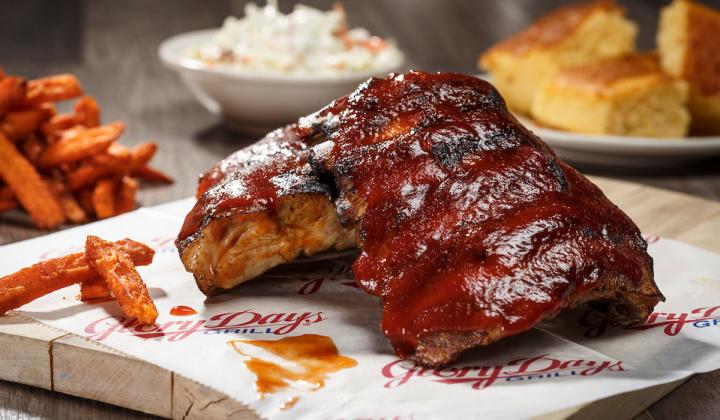 Basham views Glory Days as a valuable concept because of its clientele and market versatility. Danker agrees, and says the demographics stretch from toddlers to elderly.

“We can get little Johnny with the little league or a girls’ soccer team, 4 or 5 years old,” Danker says. “We show the Cartoon Network in our stores or you can have grandpa in there with the grandkids and he'd feel comfortable. Because on the menu, there's a little bit of something for everybody. We have a kids menu and salads and burgers and different things. We cover everything there on the menu for the families. And really it would work whether it's El Paso, Texas, Long Island, or probably Seattle, Washington. I mean really, families and sports. Come watch your favorite team or hang out with your buddies after the softball game.”

Glory Days experienced notable differences in its COVID journey based on geography. Restaurants switched to Olo a couple of months prior to the pandemic beginning, making the transition from 10-15 percent off-premises to 100 percent a much smoother transition. In Maryland and Virginia, the 22 corporate locations were forced to lay off roughly 1,500 employees. Managers were kept on staff and converted into cooks and other various hourly team member roles. Gradually, restaurants crawled out of the hole, and to-go has proven sticky at 30-33 percent. Mandates were so tight in these markets that Glory Days actually played a role in forming the Maryland Restaurant Coalition, which fought against dining restrictions.

The Florida market allowed for more success, not only because of the warmer weather and use of outdoor patios, but because of the looser guidelines throughout COVID. That includes business-friendly rules on alcohol to-go.

“You can imagine people stuck in their homes and everything, being able to get some margaritas when they got their food really resonated well,” Basham says. “So we were selling a lot of those. That was a big boost for us.”

As for future development, Glory Days wants to fill in the East Coast, from Virginia to Florida. Even before the transaction, Basham and Mcpherson believed the sports bar could place 40-50 restaurants in the Sunshine state. Glory Days will start at the company level, and then it will expand more on the franchising side with proven operators, Basham says.

“First priority is to get everybody on the same page in terms of the people side of the business and all the other stuff goes along with it and have a consistent product and consistent look and everything else,” Basham says.

Both Danker and Basham have been in the industry for decades, and neither have lost their passion for food and people. Danker compares it to coaching little league, which he and his brother used to do for their kids. It’s the same way in restaurants when they mentor high school and college students and work to put a solid team together.

Basham sums it up with an expression he recently heard—“When you’re retired, you’re tired.” And he’s not tired yet.

“I'm still having a lot of fun,” Basham says. “I've got great people. Jesse's [Mcpherson] put together a great team to move Glory Days into the future. It’s fun being around young people that still have a lot of energy and a lot of gas in the tank so to speak. To work with people like that, it energizes me. And also providing opportunities; when I was young and in the restaurant business, there were people around who provided a lot of opportunities, which gave me a chance to be successful. And I like doing that for other people who want to be successful. I want to help them share in the success.”