Discounting is down at Fleming's. Profitability, however, is up.

And Bloomin's smallest brand could just be getting started.
April 2019 Danny Klein

Outback Steakhouse’s resurgence has, rightfully so, garnered its share of headlines. The brand is riding an eight-quarter run of positive same-store sales. Its fiscal 2018 jump of 4 percent was Outback’s best annual comp result in six years. Naturally, this led to something few casual brands in today’s overcrowded climate can boast: Growth. Dave Deno, who recently took over the Bloomin’ Brands CEO role from Liz Smith, said last quarter there’s room for at least 50 more incremental Outbacks in the U.S. to add to the chain’s 733-unit footprint. But a less publicized opportunity is quietly forming at Bloomin’s smallest chain—Fleming’s Prime Steakhouse & Wine Bar.

There are currently 70 locations of the company’s fine-dining brand (there are 198 Bonefish Grills and 227 Carrabba’s). Throughout the year, executives have suggested that, after Outback, perhaps the greatest expansion whitespace lies with Fleming’s. “We feel good about the Fleming’s opportunity going forward,” Deno said simply during the company’s Q4 review.

There’s a good reason for why. Four of the last five Fleming’s debuts have been eye-openers for Bloomin’. They were at a run rate of roughly 150–160 percent of the volume of the average fleet.

After Outback’s 4 percent climb, Fleming’s was Bloomin’s second-best comps performer on a year-over-year basis in 2018 at 0.8 percent (Carrabba’s was 0.2 percent and Bonefish 0.5 percent). This as Fleming’s traffic declined 4.3 percent for the full calendar.

That latter note, while something Bloomin’ wants to reverse, actually speaks to a broader possibility. Given everything Bloomin’ did to Fleming’s operating model in 2018, it’s not surprising to see transactions suffer. The company said Fleming’s was tracking toward record profitability thanks to reduced discounting, and it spent much of the year building a healthier consumer base that supports future growth. But those efforts came with a near-term tradeoff.

Fleming’s was actually the last of Bloomin’s domestic brands to reduce its reliance on discounting. And the effect was dramatic.

It began with a simplified menu that improved execution and consistency. Fleming’s moved away from legacy-value offerings, such as the 567 Bar Menu, $29.95 Prime Rib, and some non-holiday gift card distributions.

In total, Bloomin’ drove a planned 20 percent reduction in discounting throughout Fleming’s system. The short-term knock was worth the profitability boost, Smith said earlier. Not to mention how it positions Fleming’s for the future.

Bloomin’ has said this of Fleming’s on multiple occasions: The brand is working to differentiate itself from traditional high-end steakhouses through localized menu selection and customer segmentation. Less discounts. More curated offerings.

Beth Scott, Fleming’s president, says the brand is ideally positioned to deliver that goal. Firstly, it’s playing in the right category. Based on same-store sales growth, fine dining was the top-performing segment across the industry in the first quarter of 2019, according to industry tracker TDn2K. 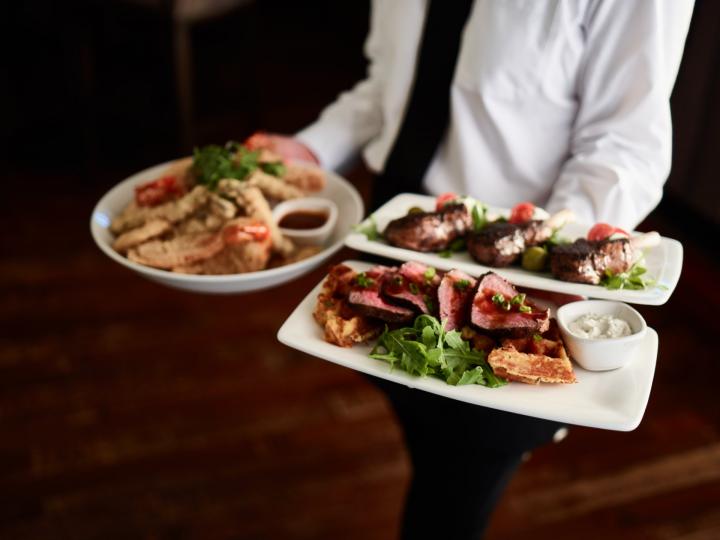 With fine dining, restaurants have to get the customer service right on the first visit.

Scott believes this can be credited to the segment’s ability to satisfy today’s experience-driven consumer, those who are willing to spend time and disposable income on dining out. It’s this generation’s version of a vacation. And if consumers are not seeking convenience or price, they’re courting ambiance and experience. That’s the sweet spot of fine dining.

“I like to say that the dining experience is the time you have to disconnect from the world and connect with the people you’re dining with,” Scott says. “We’re finding a way for customers to share their experiences with each other, and that’s something not everyone can offer.”

Zeroing in on that guest, Fleming’s drives experience throughout its menu. On Tuesdays, customers can share a “Tomahawk for Two.” It comes with two starters, two sides, two desserts, and a 35-ounce Prime Tomahawk Steak aged a minimum of 21 days and cooked in Fleming’s 1,600-degree broiler Scott is pretty confident couldn’t be picked up at the local grocer. The chain’s “Mondays at Fleming’s” presents a three-course menu with Filet Mignon and Cold-Water Lobster. The “Sunday Table” promotion is another three-course setup, featuring Slow-Roasted Beef Tenderloin, for $45 per guest. Intended, as Fleming’s says, to be a “great meal with the people you love.”

Fleming’s frequently hosts special events, like wine dinners, where it brings in winemakers to chat with guests. The chain earned an Award of Excellence from Wine Spectator six times.

“I think it’s different for every guest, but our thing is, people want to take the time to really engage with each other,” Scott says. “Put the phone down. There will always be that photographable moment. You’re there for a celebration.”

Scott says fine dining covers that corner of the market, too. Fleming’s will see multi-generational celebrations where people who have come to the brand for 15 years introduce their children, grandchildren, to the restaurant. Their fond memories of birthdays, anniversaries, and so on, spent at Fleming’s stick when it’s time to pass the tradition along. Unlike some brands that target solo occasions and spontaneous drop-ins, fine-dining chains illicit fierce loyalty because of life events, and the nostalgia that comes with them.

That can be a blessing and a curse. Fine-dining restaurants have a smaller window to nail the experience. And customers are far less forgiving given the price point.

That rule—it takes three great experiences to win a loyal guest? You could argue it’s one night in the fine-dining space.

“We really want people to walk into a Fleming’s, taste, smell, and feel like they’re in their location,” Scott says.

“It’s an interesting dilemma, right?. You want to give guests what they want but at the same point and time you want to curate that experience to hopefully put them in the best position." — Beth Scott, president of Fleming's. 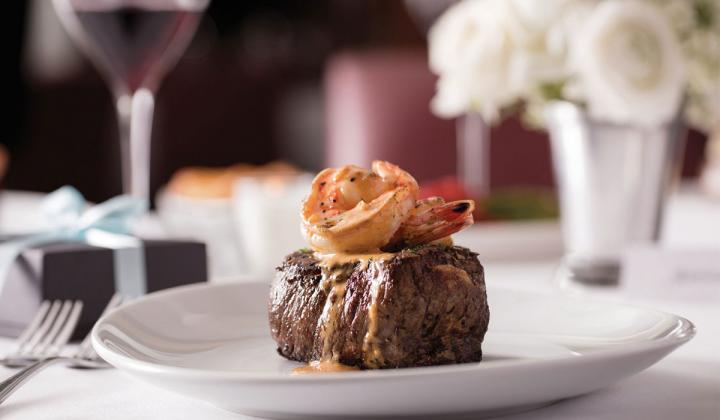 Fleming's keeps its servers and chefs connected when it comes to menu options.

Training is critical, she adds. Customer service has to be top notch from the bar to the booths. Each Fleming’s has a Chef’s Table menu named after its culinary leader. Scott says they approach the back- and front-of-the-house connection differently as well. Instead of treating the menu like a flash-card project, Fleming’s tries to encourage collaboration. “It’s interesting,” she says. “I think when we engage together, heart of the house and front of the house, from the menu conception to bringing it to the guest, it’s a partnership versus, hey, chef is going to make a couple of things and you guys need to memorize what’s in them.”

She says operating partners involve the entire team. “What are you seeing in the market? And then chefs going out and sourcing ingredients. Chefs engaging other staff members in the kitchen on where they grew up, and what did they eat, and what are they seeing. And then creating those dishes together,” Scott says. “Tasting and changing along the way.”

“It’s helped really solidify the program as something that’s ingrained in the culture versus just, we’re adding these menu items and now everyone has to know there’s cilantro in this dish,” Scott says.

She called the change “a culture shift for Fleming’s,” and a program that will definitely continue. It gives servers something dynamic to talk about, and it brings guests into the fold.

Fleming’s sends teams for wine certifications. Scott says they’ve seen retention rise as they incorporate more education into the training process. “This whole millennial, want access to information and bettering your own knowledge notion, it just falls right into something like this.”

It’s turning Fleming’s employees into food experts, she says, and that’s no small change from the status quo.

A recent study from research and consulting firm Y-Pulse surveyed 1,400 restaurant workers aged 18–34. In the data, 76 percent said their friends considered them foodies for working at a restaurant. That doesn’t happen by accident.

“You really see it in the front of the house with us,” Scot says. “They are actually rising to the occasion of wanting to learn more about food versus, again, just kind of memorizing things.”

Here’s an example: Fleming’s has stayed away from technology at the table. There isn’t a kiosk in sight. But the company did dabble a bit with wine iPads before realizing guests wanted to engage servers on the topic, not just scroll through a cool-looking list. They sought personal recommendations, which opens the door for all sorts of selling opportunities.

“It’s an interesting dilemma, right?” Scott says. “You want to give guests what they want but at the same point and time you want to curate that experience to hopefully put them in the best position.”

Fleming’s tries to keep its wine list fresh with recognizable options and choices not found at the local store. Fleming’s invested in a Coravin system so it could offer some options by the glass that normally would have taken a whole bottle commitment.

This is how Fleming’s looks at technology—as a customer service enabler, not as a replacement to a human element. 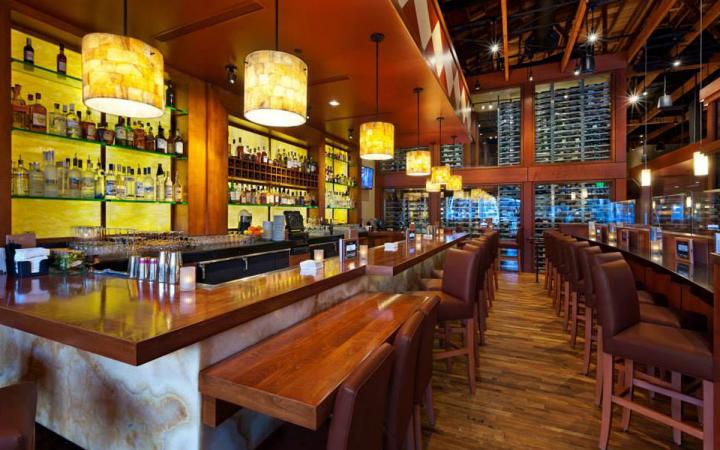 Fleming's might be the smallest concept in Bloomin's portfolio, but it has room to grow.

Something like having a customer service management system that allows Fleming’s to know more about guests’ preferences and what they had last time, so the chain could surprise with a favorite drink or food item on the next visit.

With technology, Fleming’s can wield the benefits of a multi-chain, multi-brand system directed by one of the industry’s biggest operators.

Bloomin’s Dine Rewards program has north of 8 million members. The company has used it to drive engagement across its portfolio and leverage customer segmentation opportunities provided by data it has collected over the years. Bloomin’s investments in CRM allow engagement through customer-centric communication, and also give the company room to provide higher return from marketing spend. In the past two years, for instance, Bloomin’ reduced advertising spend $25 million as its shifted from mass marketing to digital personalization.

In regards to Fleming’s, the platform lets Bloomin’ cross fertilize its traffic. It can introduce loyal customers of, say, Outback, to Fleming’s with deals that might fit into their personalized schedule, like a birthday. Smith said Bloomim’ has seen existing customers experience other brands, like Fleming’s, and increase their entire frequency across Bloomin’s ecosystem. It also saw new users try brands they didn’t know were even connected to each other.

What it’s done for Fleming’s in particular, Scott says, is give the chain a more sophisticated approach to customer service than the roaming birthday singer. “We can decorate the table specially, send them home with a special gift. We’re trying to up the level,” she says. And that comes from having rich consumer information beforehand.

Fleming’s can now customize emails that are more relevant to customers so it’s not just “crushing your inbox,” as Scott puts it. Not just offers but notes about specific happenings, like a chef’s table addition. Every month Fleming’s will send out news curated to each market, telling them what’s on the seasonal menu, etc. “It’s much more effective than inundating them with national messaging that’s not relevant for them,” Scott says. “And I think it helps us connect to the communities better.”

“We’re really trying to be your local steakhouse even though we’re a national brand,” she says.