First Watch believes there's plenty of room to grow in the breakfast, brunch, and lunch dayparts.

The 423-unit chain has hit the ground running in recent weeks, from a growth and sales standpoint.

If the brand does go public, it would become the first full-service restaurant to do so since Kura Sushi in August 2019. Fogo de Chao, which returned to the private sector with a $560 million sale in February 2018, preceded Kura Sushi in 2015.

More recently during the COVID window, First Watch posted same-store sales growth of 16.3 percent in the second quarter that ended June 27 relative to the same stretch in 2019. Also notable, traffic was ahead of 2019 comparisons by 1 percent.

MORE: All Eyes on First Watch: Why the Breakfast Leader is Just Getting Started

On April 13, 2020, First Watch made the call to shutter its entire company-run footprint, including to-go and delivery. By the middle of May, it began to reopen dining rooms in two markets and emerged with a far stronger off-premises corner of its business. For perspective, pre-COVID, First Watch guests had to call restaurants to get takeout. Within a year, sales outside the four walls boomed 600 percent as First Watch fast-tracked online ordering and delivery (it implemented a surcharge for third-party orders), partnering with Olo and linking up with DoorDash and Uber Eats at all locations.

Despite all the challenges and pivots, First Watch managed to open 42 and 18 restaurants in fiscal 2020 and the 26-week period that closed June 27, respectively.

First Watch’s 42 openings totaled more than the second, third, and fourth fastest-growing full-service brands combined last year (Texas Roadhouse, 19; Walk-On’s, 12; LongHorn, 8). It brought the 1983-founded concept to 423 locations across 28 states as of June 27. Of that, 335 are company run and 88 operated by franchisees.

Recent openings are generating annualized average sales of $2 million as well, above the fleet average of $1.7 million.

It’s been a rapid climb. In 2006, when current-CEO Chris Tomasso joined as the chain’s first CMO, there were only 60 restaurants in nine states. The former VP of marketing for Cracker Barrel watched First Watch explode to more than 250 locations before being named CEO in 2018. Advent International made a majority investment the previous year.

In Florida, the chain’s most mature market with the greatest number of company-owned restaurants, First Watch has grown from 54 to 99 restaurants over the last six calendars, while generating average annual same-restaurant sales growth of 6.8 percent from fiscal 2015 to 2019.

“We believe we have significant potential to expand our presence within all the states in which we currently operate as well as new ones,” the company said. It believes there’s potential for more than 2,200 U.S. locations, which would sail it past Waffle House (about 1,900) as America’s largest full-service brand. 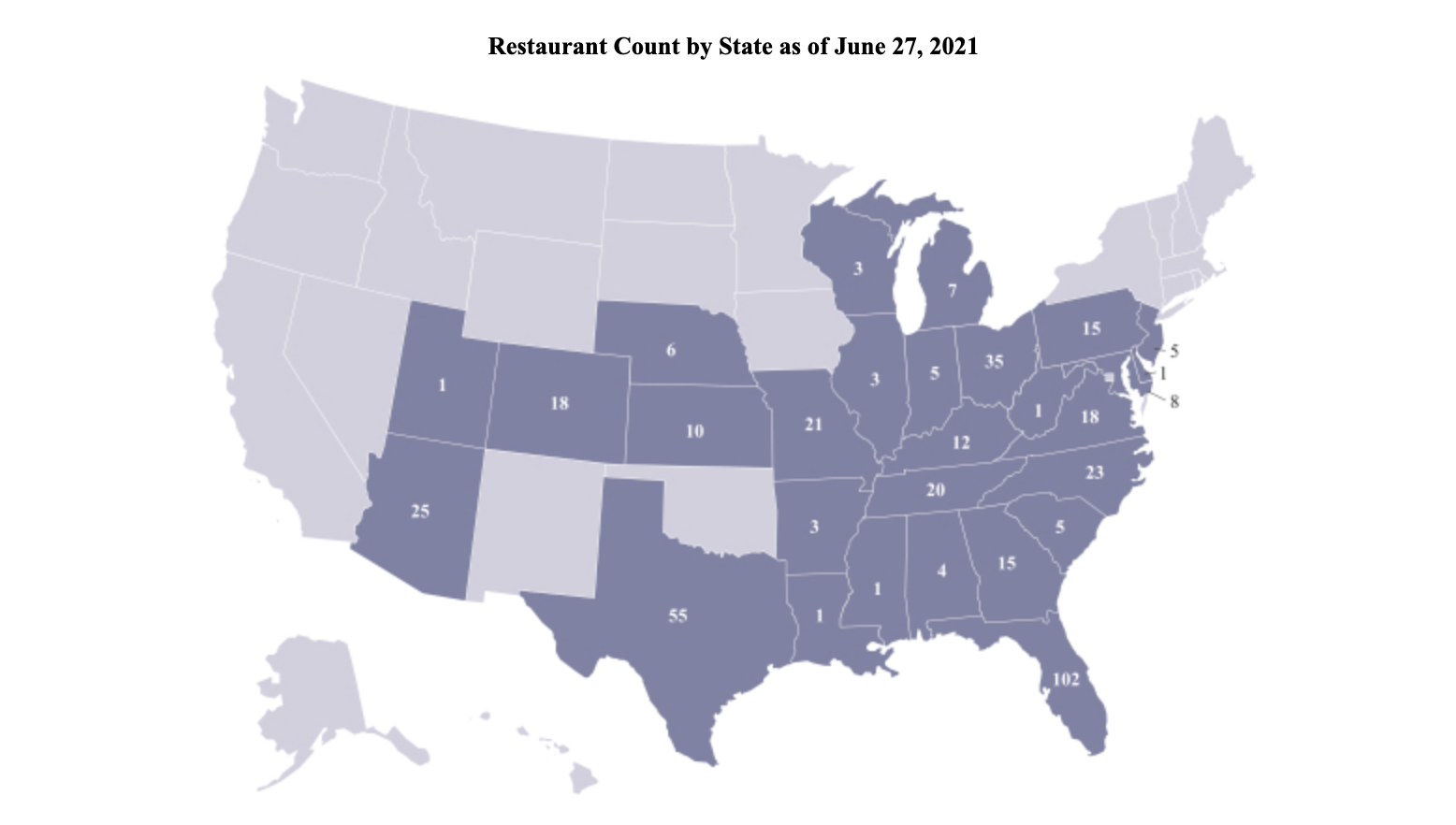 First Watch famously runs a “one-shift” business, from 7 a.m. to 2:30 p.m., with one main menu, which the company says enables it to optimize operations and attract and retain employees passionate about hospitality and drawn to a “No Night Shifts Ever” approach.

In the six-year period that ended December 29 (before COVID), First Watch’s same-store sales growth averaged 6.3 percent annually. Traffic climbed about 1.4 percent. In the five-year period that ended the same time, average-unit volumes lifted 25.7 percent, from $1.3 million in fiscal 2015 to $1.6 million in 2019. Alongside growth, corporate units have opened with average cash-on-cash returns of 50.8 percent, the company said in the filing.

First Watch enjoyed ample momentum coming into the pandemic. The chain saw comps growth of 7.4 and 4.7 percent, respectively, in January and February of 2020.

Dining rooms began closing the week of March 15, which led to First Watch ultimately furloughing most of its 9,000 employees. The company provided relief payments to hourly workers with more than three years of service and committed to making managers and corporate employees “whole” upon return, meaning it covered any financial shortfall between state and federal benefits and those employees’ base salaries.

First Watch also paid employers and employee portions of healthcare premiums for furloughed individuals enrolled in its healthcare plans, and covered all out-of-pocket costs for insured workers and their families for medical visits related to COVID, while securing telemedicine services.

Additionally, First Watch created the “You First Fund,” which provides tax-free grants to in-need employees. The company distributed roughly $800,000 in such grants through June.

First Watch’s restaurant-level manager turnover was 29 percent during the last 12 months ending March 2020, lower than the industry average of 41 percent, according to Black Box Intelligence. As a result of COVID efforts, the company said, 75 percent of hourly employees who worked at First Watch for more than three years and about 90 percent of general managers returned to work when restaurants reopened.

On the operations side, First Watch launched its aforementioned new mobile app and accelerated rollout of its alcohol program, which increased overall beverage incidence by 230 basis points. As of June 27, First Watch’s alcohol menu was offered in 244 restaurants, “with clear plans to continue the expansion to all restaurants where feasible.” In Q2, alcohol accounted for 3.6 percent of in-restaurant sales at company-owned restaurants and increased the average in-restaurant customer spend by 30 cents as compared to restaurants that do not offer alcohol.

The company didn’t pare down its menu (60 entrée items) during COVID and expanded patio and outdoor service areas, too.

Things began to pick up in March 2021. With pent-up demand surging in-store dining and off-premises channels remaining well above past levels, First Watch posted same-store sales growth of 5.9, 13.4, 14.8, and 19.7 percent in March, April, May, and June, respectively. And this was against 2019 months.

It’s carried over into Q3, with July up 20.2 percent on a two-year view and August 17 percent. Traffic in those periods climbed 5.1 and 2 percent, respectively.

Looking ahead, First Watch believes the breakfast and morning snack business is going to buoy trends into the future. The morning meal was the only foodservice daypart with consistent year-over-year growth, according to RKMA. The restaurant industry captured two additional breakfast visits per capita, from 2015 to 2018, and with 78 percent of breakfasts still being prepared at home during 2019, according to The NPD Group. There were 102 billion breakfast occasions and 50 billion morning snack occasions in 2019, per a January 2020 NPD Breakfast Insights report. “We believe that the broad appeal of our menu and the quality of our ingredients gives us a competitive advantage over many alternatives that offer breakfast and lunch,” First Watch said Tuesday.

The company also expects the “migration from dense urban to suburban areas, where most of our restaurants are located,” to result in increased traffic and brand awareness. “Increased work-from-home routines have kept people in suburban areas for larger portions of the day, increasing First Watch exposure to an incremental customer base,” the company said.

First Watch’s operating hours encompass breakfast, brunch, and lunch, which represent 63 percent of all restaurant sales in the U.S., according to RKMA.

Another interesting point—in 2019, only 6 percent of First Watch’s weekday customers purchased lunch entrees. But the company said the migration of people from urban to suburban markets in light of COVID, coupled with work-from-home trends, presents the company with an incremental customer opportunity during the weekday business hours. “Which we believe will further propel growth in our lunch daypart,” the company said.

As this unfolds, First Watch has massive whitespace in the brand awareness conversation. The brand’s customer affinity was highlighted in a 2021 national study where First Watch ranked 10th in net promoter score among the country’s 74 largest restaurant brands. However, brand awareness, as indicated by a recent nationally represented survey, only 11 percent of respondents were aware of First Watch. “The combination of both high customer satisfaction and opportunity for growing awareness highlights strong potential for the brand,” First Watch said.

Advertising costs represented about 1 percent of total revenues in 2019 and 2020.