Famous Dave's
Famous Dave's new menu is inspired by its founder and features 23 fresh items, including a value section.

In the past several months, Famous Dave’s business model and corporate structure has shifted behind the curtain. Jeffery Crivello, the chief financial officer of PW Partners Capital Management, LLC, took over as chief executive officer in November. Famous Dave’s made a CFO change in February when Dexter Newman announced his departure, effective March 5. Paul Malazita assumed the role of interim chief financial officer.

Then, later in the month, when the company was reporting fourth-quarter earnings, Famous Dave’s continued to outline its strategy toward becoming a leaner, more profitable restaurant company, including the closing of 13 underperforming units in fiscal 2017 and the refranchising of eight company-owned stores. This brought the split to 16 corporate locations and 135 franchises in 32 states, Puerto Rico, Canada, and United Arab Emirates. Since 2015, Famous Dave’s decreased its company-owned stores from 50 to 16 as it sheds net debt, and diverts resources to franchise operations, like training and marketing efforts.

Now, Famous Dave’s is taking some of those changes to the frontline.

The company unveiled new “founder-inspired brand initiatives,” intended to “elevate its franchise offerings.” This includes 23 new menu items curated by founder and barbecue hall of famer “Famous Dave” Anderson. Also, the chain introduced a smaller footprint and investments in technology such as online ordering, third-party delivery, and the eventual rollout of delivery-only stores.

“Barbeque is a labor-intensive undertaking, especially since we commit to using smokers in each of the restaurants and give each menu item the attention it needs to be truly Famous,” Anderson said in a statement “When I founded the concept decades ago, I was on a mission to deliver on the best barbeque in town. Because our franchisees are so committed to delivering on that same great taste, they’re always open to innovative offerings to deliver to their loyal guests.”

Included in the new menu: Hillbilly Hubcaps, Cajun-seasoned fried jalapeño slices served with rémoulade sauce and Burnt Buttz, a smoked pork that is flash-fried and griddled in blackberry barbeque sauce.

Franchisee will now have the ability to customize Famous Dave's menus to their region.

Franchisees are being given more room to innovate. The company said it is encouraging operators to customize menus to their region, with the option to select from various designs to provide menu localization to Famous Dave’s brand identity.

This latter note could be a powerful one considering the regional roadblock that national barbecue chains often face in expansion.

“We introduced flexibility in menu printing and design because we want them to be able to showcase different flavors that are specific to each of their regions in addition to the delicious and cravable core offerings we have” Crivello said in a statement. “As we develop as a brand it’s critical that we continuously roll out innovative ideas that will keep us ahead of the curve in the industry and allow us to offer something new and exciting to our guests.”

Third-party delivery arrives in August at all corporate locations. Franchise units are up next, Famous Dave’s said, adding that the shift allowed the chain to target younger customers. Franchisees are curently deploying the services of an outside delivery specialist to accelerate the process.

More vividly, it also inspired the company to imagine a delivery-only model. The company said these units would fit in 500– to 800-square spots compared to the typical 5,000-square foot footprint. It will allow for food preparation and quick delivery of the same items featured at full-service locations, Famous Dave’s said. 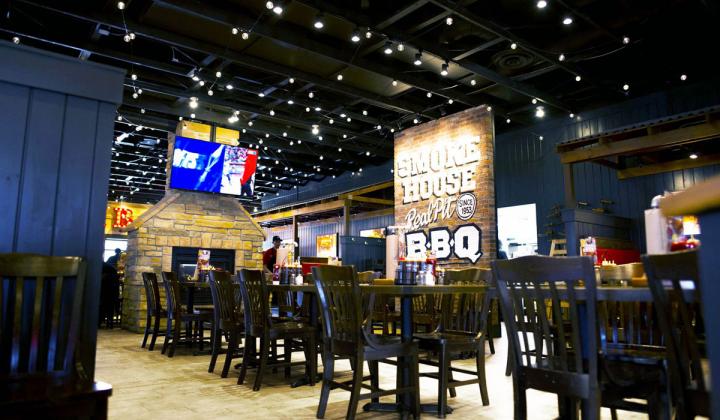 Famous Dave's expects to be a more nimble concept with varied footprint models. 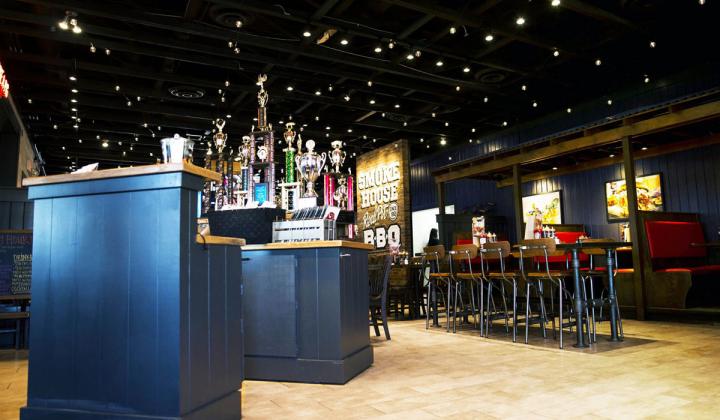 “As we move forward, we are focused on laying the groundwork for the future by constantly looking for ways to revamp our offerings to both our guests and franchisees,” said COO Geovannie Concepcion in a statement. “We are a nimble and active company, and we are prepared to get things to the market as quickly as possible to stay relevant in the space. With the help of our dedicated franchisees, our strong brand and culture, and our commitment to staying true to our roots, we’re excited to see what the future holds. Pairing the delivery and online ordering option with the new menu and store design will allow us to differentiate in the segment and attract new Famous Dave’s fans and franchise partners.”

This delivery-only model is something Red Robin is testing in downtown Chicago. Like Famous Dave’s expectation, this store features signature items served from a smaller spot without the sit-down experience.

Bloomin’ Brands opened its first Express locations in fiscal 2017. These combine Outback and Carrabba’s offerings in delivery and takeout-only formats. There are three currently open, with eight expected by the end of the year.