Famous Dave’s formed BBQ Holdings in September 2019 to increase its footprint across the U.S.

The company is also growing via fast-casual models, ghost kitchens, and dual-branded units.

The company said Monday in a filing that it has a “vision to build a diverse portfolio of established food and beverage concepts” and that it’s “currently analyzing multiple opportunities.” BBQ Holdings’ wish list includes the following criteria: legacy brands, franchise systems with growth potential, consumer packaged goods sold in retail, expertise in digital marketing, and accretive acquisitions (2-3x EBITDA) that fold into the current infrastructure.

Famous Dave’s formed BBQ Holdings in September 2019 to increase its footprint across the U.S. In December 2019, the company opened Oklahoma City-based Clark Crew BBQ in partnership with pitmaster Travis Clark. In January 2020, BBQ Holdings announced the debut of Real Famous BBQ in Provo, Utah, but the brand eventually closed.

The M&A journey started in February 2020 when BBQ Holdings agreed to acquire Granite City Food and Brewery out of bankruptcy—the company’s first non-barbecue brand. The 18-unit chain saw same-store sales drop 20 percent in January and 26.3 percent in February, but rise 60.8 percent in March as it lapped the early effects of the pandemic. Granite City is on pace to earn between $68 million and $70 million in revenue in 2021, with AUVs between $3.8 million and $3.9 million. In 2019, Granite City earned $75 million in sales.

Soon after, BBQ Holdings purchased a Real Urban Barbecue restaurant based in Vernon Hills, Illinois. The store garnered $350,000 from retail goods in 2020 and is on pace to earn between $2 million and $2.5 million in revenue in 2021. The cafeteria-style barbecue restaurant inspired the future opening of Famous Dave’s Quick ‘Que line-service model. Five Quick ‘Que stores are projected to land in 2021, including a Salt Lake City location that will have a drive-thru. 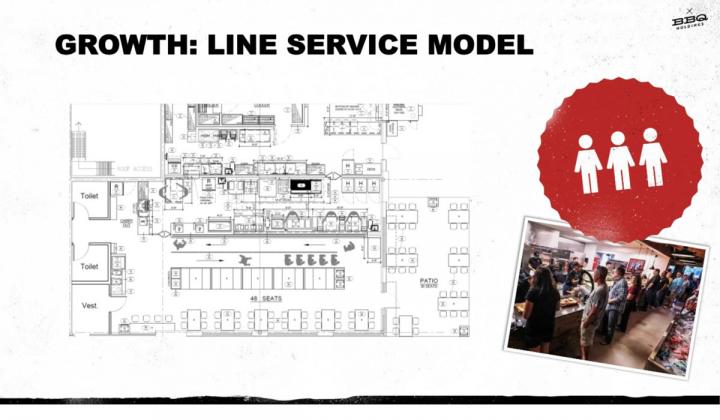 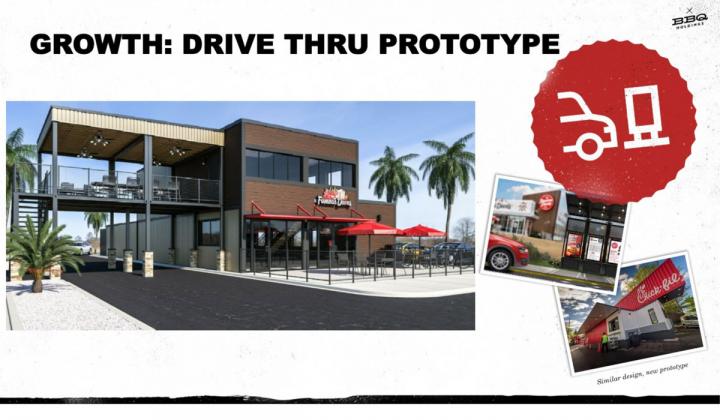 New store models, including a drive-thru (directly above) are in Famous Dave's future.

The acquisitions were part of a busy 2020 for BBQ Holdings, which invested heavily in ghost kitchens and dual-branded restaurants.

The company opened seven Famous Dave’s ghost kitchens inside Granite City locations. The ghost kitchens are generating an average of $7,000 per store per week. When volume warrants, restaurants are investing in separate to-go areas to streamline operations. Two more will be added in 2021.

The motivation behind dual concepts is that Famous Dave’s 6,500-square-foot boxes are designed to execute higher AUVs than the current $2.7 million. BBQ Holdings estimated that when Famous Dave’s teams up with another brand, it could bring in $1 million to $1.3 million in additional revenue with 25 percent flow through, and $250,000 to $325,000 in additional EBITDA per location.

BBQ Holdings is also exploring a dual/virtual concept partnership with a “known pizza brand that has simplistic operations with low upfront capital investment.” The company said a potential deal could produce $800,000 in additional revenue with 25 percent flow through and $200,000 in additional EBITDA per location.

The company has the same mindset for Granite City. Similar to Famous Dave’s, Granite City’s kitchens were meant for roughly $6 million in AUV, as opposed to the current $3.8 million to $3.9 million. To resolve this, BBQ Holdings is investigating a dual-branded restaurant with a high-end breakfast concept that also sells alcohol.

The breakfast restaurant would be open from 6 a.m. to 2 p.m. while Granite City would open from 2 p.m. to 11 p.m. The goal would be to open 10 of these restaurants. BBQ Holdings estimated such a deal could generate $1.5 million in additional revenue with 25 percent flow through and $375,000 in additional EBITDA per location.

BBQ Holdings same-store sales sank 15.3 percent in 2020, including a 17 percent decline at the 98 franchised locations and a 8.5 percent slip at the 47 company-owned units. Off-premises sales mixed 61.9 percent in 2020 at corporate Famous Dave’s restaurants, or a 72.6 percent increase year-over-year. Dine-in sales mixed 30.9 percent, or a 46.3 percent decrease, and catering mixed 7.2 percent, or a 54.6 percent plummet.

Famous Dave’s 27 corporate locations are projected to generate between $72.5 million and $74.5 million in revenue in 2021, and the 98 franchised locations are on pace to earn roughly $200 million this year.