Famous Dave's Lays the Groundwork for a Barbecue Empire

Could acquisitions be in the 25-year-old chain's future?

Famous Dave’s quietly reorganized in early September. Famous Dave’s of America, Inc. became a wholly owned subsidiary of BBQ Holdings, Inc., a new public company. The change brought to surface a question that has long shadowed the barbecue industry: Can a concept ever truly scale nationwide?

The challenge has always been transparent. Barbecue in Texas is not barbecue in North Carolina. And everybody will tell you so. In unkindly terms. From a less regional and perhaps less sexy vantage point, the operations behind growing a barbecue brand are challenging as well, to put it lightly. Consider how long it takes to make a burger versus what goes into smoking brisket. Then throw in the triple-digit turnover rates many restaurants face. Scaling a barbecue chain suddenly becomes not just a risky endeavor from a guest acceptance standpoint, but a logistically nightmarish one on the back end.

What does this have to do with September’s holding company shift? It signals another path for Famous Dave’s to tackle this mythical, national barbecue target. On December 9, the company opened Oklahoma City-based Clark Crew BBQ in partnership with Travis Clark, a pitmaster who, along with his competition team, has collected more than 650 top-10 awards.

Clark partnered with Famous Dave’s in 2018. He’s worked with the chain’s culinary team to improve food quality and consistency, focusing mainly on core barbecue proteins like brisket, ribs, pork, and chicken. But opening a dedicated, branded concept was always part of the plan.

The key point here is that Clark Crew BBQ isn’t intended to be an offshoot moment for Famous Dave’s. It’s what the company planned all along when it became BBQ Holdings, Inc.—the notion of becoming a multi-concept umbrella barbecue company that could grow regionally via different, local-specific brands. 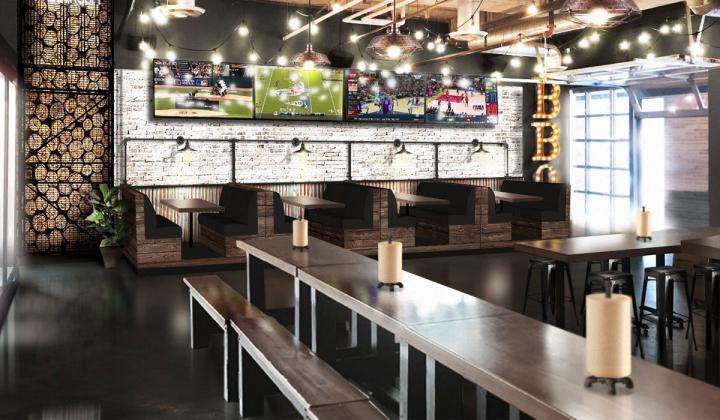 Famous Dave's Uptown, Minneapolis, prototype is all about becoming a local barbecue hangout.

Famous Dave’s CEO Jeff Crivello joined the company in November 2017 and has now led it longer than the four executives who came before him—the brand cycled through five executive changes in five years. He says the shift to BBQ Holdings, Inc. was a logical one given that “we have an open mind and we are open to other acquisitions that make sense.”

“That kind of fit that smaller business model,” he adds, referencing Famous Dave’s recent changes to shrink square footage in stores (more on this later). “And we have the resources lined up to do it.”

It goes back to the challenge at hand. Yes, barbecue is about as American as it gets when it comes to cuisine. Yet it’s viewed through the lens of classic, regional venues that turn the lights off when the meat runs out. Roadside shacks. Places that belong to communities and taste profiles that date back generations.

But the good news, Crivello says, is there’s no shortage of such places across the country. In this case, not single-unit landmarks exactly but barbecue brands that have managed to get to three or five units and are locally revered. Maybe they’ve reached their limits, however, in terms of resources to scale.

Those are the concepts Famous Dave’s would be interested in speaking with, Crivello says.

The vision would grant Famous Dave’s a national barbecue network it could bring operating expertise to. Yet one that also has guest support and fandom that many chains chase, but few grab real share in.

There’s another element to the name change as well. Famous Dave’s itself is branching into new territory within its own footprint.

In Q3, the chain signed a lease on a 3,000-square-foot, bar-centric restaurant in the Uptown neighborhood of Minneapolis. This kicked off Famous Dave’s small-box initiative in company-run restaurants (it reacquired five franchises in the period and expects to reinvest about $10 million this year to refresh and update corporate units). The restaurant, which features an abbreviated menu, is set to open December 20.

The location isn’t just scaled back; it’s also tech forward (typical units are 6,500—7,000 square feet). The restaurant features tabletop ordering and kiosks. Famous Dave’s plans to have five to 10 of these in the next year or so.

The Uptown model converted from a German brat house. Crivello says the idea is to evolve the spot into a local barbecue joint tailored toward a younger demographic. Hence the bar element. Trivia, game nights, and karaoke will be part of the mix. It will also focus heavily on delivery and catering, which was previously a large aspect of the brand’s former Uptown location.

“We are not tailoring this just to be a counter-serve or a quick-serve model,” he says of the kiosk and tabletop ordering. “We want it to still be comfortable enough where you can feel you can hang out and someone will ask you if you would like another cocktail or another appetizer or a burger or a rack of ribs.”

Famous Dave’s continues to experiment with a fast casual called Real Famous BBQ in Provo, Utah, as well, in addition to ghost kitchens that offer meals under the company’s branding. 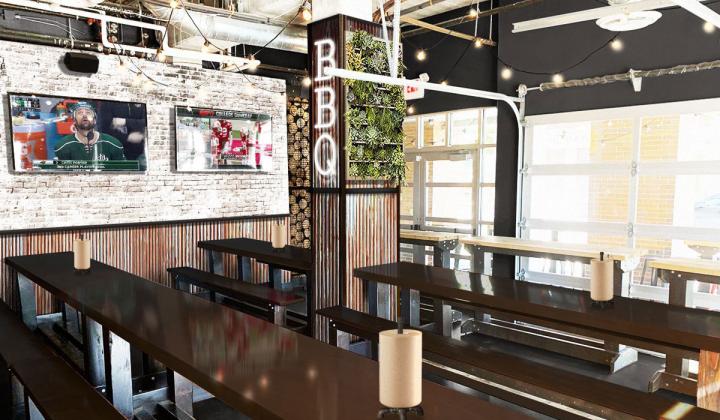 Famous Dave's new, smaller model will also feature technological innovations such as tabletop ordering and digital kiosks in an effort to appeal to a younger demographic.

These changes center not so much on replacing the service element as catering to the rise of convenience. Just a decade ago, take-out, or off-premises, mixed roughly 15 percent of Famous Dave’s business. Today, it’s 55 percent. It was 30 percent five years ago.

All of this led Famous Dave’s to begin working on something else that harkens back to barbecue lore in America—pick-up windows. Only Famous Dave’s is going to do it via a more traditional route, similar to the biggest players in quick service. In other terms, customers will be able to order at the drive-thru menuboard. (Here’s a piece on why menuboards are critical these days).

The brand plans to open four drive-thru locations in 2020. Crivello says Famous Dave’s expects 20–30 percent of sales to go through the drive-thru window. It will also allow the company to build smaller restaurants. Less space in the dining room. Fewer spots for parking. “What that happens, efficiencies happen,” Crivello says. “The customer is happy and I think it’s the reason why a lot of restaurants are clamoring to be the next guy to pop up with the drive thru.”

Famous Dave’s has tried pick-up windows in the past, but it’s never successfully or robustly done it correctly as a true drive thru, he adds. Crivello credits that to the times. Back in the day, drive thrus weren’t really a popular thing at restaurants other than fast food. But that’s changed now as you see everyone from high-end fast casuals to Chipotle—a brand that long swore it off—giving the convenience-anchored element a try.

“And people don’t think of barbecue as [quick service],” Crivello says. “Even today if you drive farther south, barbecue restaurants that are 6,000, 7,000 square feet even have a drive thru. It’s just become the norm.”

In 2020, Famous Dave’s hopes to introduce 17 restaurants it bought back from franchisees in an effort to rejuvenate the brand. Also, to present current and prospective operators a case study to see changes in action.

He believes it could take another year or so to fully integrate the company’s systems into these restaurants. Replace all the equipment. Refresh the décor. Famous Dave’s has worked on design and menu changes over the past year to infuse life back into some legacy units. The chain turned 25 in October.

In December 2018, the company also launched a loyalty app that has generated about 135,500 downloads and $1.2 million of systemwide sales.

While these updates unfurl, Famous Dave’s retracted unit count, something Crivello hopes won’t continue into the future. There were 147 restaurants on September 30, 2018 (compared to 128 today).

Something Famous Dave’s has done as well recently is run daily deals to generate traffic. Crivello says that’s come at zero cost to marketing. It’s all social media mixed with text, and the loyalty app pushing notifications to users.

If Famous Dave’s can net five units next year that would be a big win, he adds. Mostly because the brand is trying to expand with an early version store that hasn’t been proven out just yet. It will evolve as the openings mount. Crivello says it typically takes between five and 10 units to get the store perfected “before you can really start stamping them out.”

“There’s nothing exciting about closing a restaurant. It’s very exciting to cut a ribbon and open a new restaurant,” Crivello says. “So, to be part of new communities, to add Famous team members to the family, it’s exciting to try new things such as the drive thru. It’s exciting to add new brands, such as Clark Crew Barbecue. All of these things are what gets me out of bed early in the morning and keeps me up late at night.”