In late October, Famous Dave's rolled out a menu refresh at all 151 restaurants systemwide.

From virtual restaurants to a broad menu refresh, the classic barbecue chain is preparing for a bold, new era.
December 2018 Danny Klein

The behavior of a third-party delivery user typically plays out as follows: Sort by proximity, or sort by cuisine. Where does that leave a restaurant that doesn’t box its food into a single category? This was a question Famous Dave’s chief operating officer Geovannie Concepcion found himself asking.

“One of the classic marketing riddles we’ve struggled with as a brand is yes, we are a barbecue joint, we have great barbecue, but the other stuff here is really good, too,” Concepcion says. “And how do we emphasize that?”

That’s a general marketing challenge faced by brands nationwide, in all segments and directions. But it becomes an entirely separate dilemma when you consider how future models might offset some of the sector’s top challenges.

There are no shortages of concerns in terms of cost structure, Concepcion says. Real estate is expensive and getting more pricey. Prime locations are tougher to land than ever. Cost is rising in labor and goods. Meanwhile, traffic keeps falling as the marketplace saturates and additional channels, like grab-and-go, steal customer share.

The challenge and opportunity then becomes: how can restaurants find creative ways to get more out of the physical assets they already have?

“Because the reality is restaurant business is capital intensive,” Concepcion says. “You need a kitchen. You need space. You need a lot of things to make it hum.” 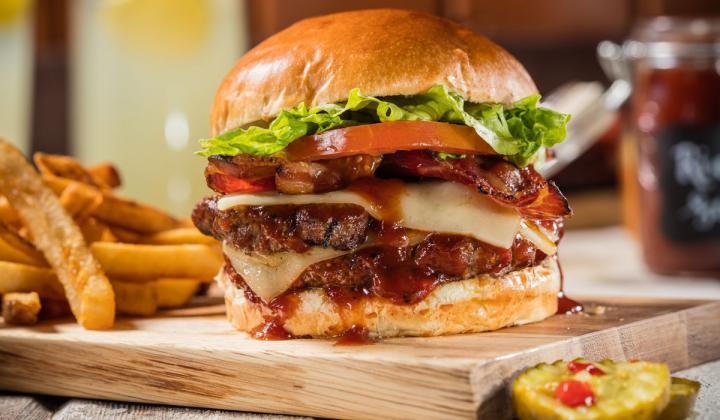 How can Famous Dave's get its burgers to show up on third-party delivery platforms? How about creating a virtual burger restaurant.

Here’s where the third-party anecdote resurfaces. Famous Dave’s has enjoyed a strong response to the delivery side of its business, Concepcion says. And what are future models that can help the brand court that incremental business?

Famous Dave’s is concepting the notion of multiple virtual concepts that exist within its own restaurants. So there could be a burger-themed or salad-themed concept. This way, when a third-party delivery user swipes over burgers or salads, they’ll see a restaurant with high ratings that serves the product they’re looking for. It just happens to also be housed in Famous Dave’s, whether they realize it or not. It will be delivered out of the same kitchen and handled by the same staff. And because that virtual concept was of little to no cost to Famous Dave’s, it’s a much swifter path than opening, say, a spin-off burger chain.

“I think, because the virtual space has this low startup cost, maybe we can just focus on our burgers virtually, and see how that does,” Concepcion says. “And so I think that opens up a way for us to connect with the consumers and then solve that business issue of getting more out of our existing assets without all the really expensive equipment and other stuff that goes into launching a new concept.”

“I call it latent capacity,” he adds. “For us, we have latent capacity in the kitchen, especially during lunch time. The ways we can figure out how to be creative and figure out what to do there the better off we are.”

The other possible model Concepcion mentioned is the idea that Famous Dave’s could team up with a different concept and feature a Famous Dave’s branded menu out of a shared space, or operate from a non-branded kitchen, like a delivery-only spot.

Famous Dave’s decided against opening a planned location with Kitchen United recently, but the company is still looking at that segment, Concepcion says. The brand is measuring a couple of iterations. 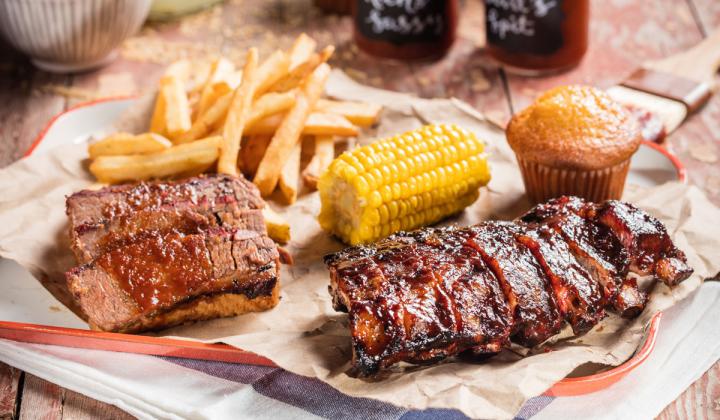 Famous Dave's barbecue remains the core menu feature. But that doesn't mean it can't promote other features to delivery users.

No matter how Famous Dave’s ends up growing, you can expect it to be an exploratory process. Concepcion and CEO Jeff Crivello, who assumed the role last February, weren’t restaurateurs by trade when they joined Famous Dave’s.

“We came at it with a blank slate of, what are the key issues we need to solve here? And how do we make the organization itself more entrepreneurial and able to deal with exploring all these different types of paths?” Concepcion says.

This past quarter, the chain’s franchise-operated same-store sales declined 1.8 percent (135 of 151 restaurants are franchise run). Total revenue for the third quarter was $14.1 million. It was down 12.4 percent versus the prior-year period due to the closure of nine company-run stores.

Famous Dave’s has made significant strides when it comes to profitability following a rough stretch where it posted one positive same-store sales quarter in six years. It earned $1.4 million in the period that ended July 1. For perspective, Famous Dave’s lost roughly the same amount of money in the year-ago segment.

Famous Dave’s launched its first “founder inspired” refresh project at a Coon Rapids, Minnesota, location. The store reunited Famous Dave’s with its founder, Dave Anderson, who split with the company in 2015 under previous management, to design a unit with a new look and menu that paid homage to its past. The store reported double-digit sales growth in early reports. Even after tailing off somewhat, sales are up 10 percent with a traffic lift of 12–13 percent. The new design also featured 23 new menu items developed by Anderson.

In late October, the chain rolled out a menu refresh at all 151 restaurants systemwide. Franchisees implemented four core items that were picked from the update—cheese curds, build-your-own burgers, 3-meat combo, and hand-breaded chicken tenders. Five changes were also asked of operators with the idea that, no matter where guests went in the country, they’d see about 10 new items on the menu. 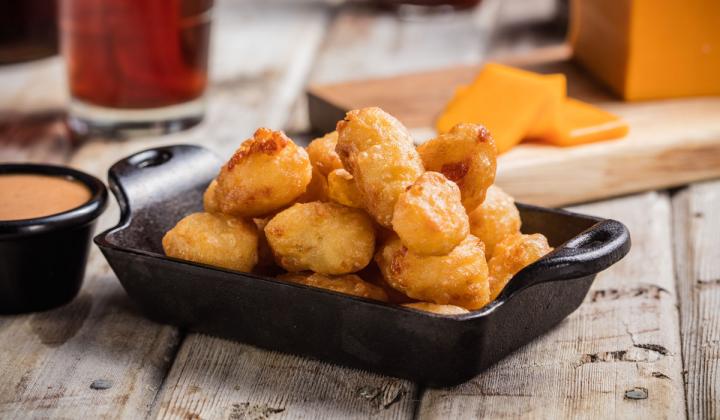 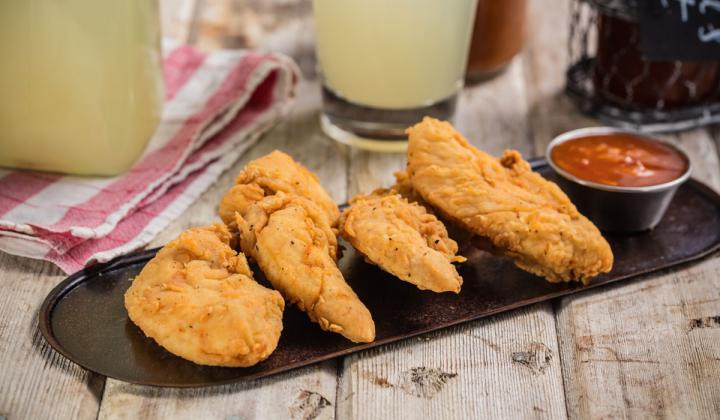 As were updated chicken tenders.

The program is spearheaded by Famous Dave’s new head of culinary, Sylvia Matzke-Hill, who came to the brand from Buffalo Wild Wings earlier in the fall.

Matzke-Hill says the goal was to simply make Famous Dave’s menu more relevant to today’s customers. That meant capturing trends, like the chain’s new Brussels sprouts, fried and tossed in a bacon and onion glass. Or Texas Beef Brisket Bowl and George Pork Bowl, which pile ingredients into a one-stop meal. Famous Dave’s also wanted to infuse some bold and international flair, like the jalapeño Sweet & Sour sauce that accompanies its new chicken tenders.

“Analyzing the current menu and taking a look at some of the items that we had and how could we elevate that and make it more relevant to today’s consumers,” she says. “That was really the backbone behind it. And then kind of put the little founder’s twist on it.”

Anderson was the guiding light. He brought in recipes and approved new items. “He’s got an amazing palate,” Matzke-Hill says. “He knows flavors and knows combining different flavors and different seasonings together to create some really, really tasty products.”

One of the challenges Famous Dave’s has always faced is trying to balance barbecue with scale. A burger joint might have three minutes to mess up an order. At Famous Dave’s, the window can be 24 hours, maybe more, depending on the dish. Matzke-Hill says it’s always in the back of her mind—how to balance from-scratch items with operational success. Famous Dave’s tries to repurpose ingredients in new products to keep kitchen complexity down. But at the end of the day, it comes down to culture and training. “The kind of fun thing is the teams know that’s who we are,” she says. “And I would say that our teams have really put a lot of energy and focus, our managers have been just fantastic at just trying to work to make sure that everybody understands the processes and procedures and checks and balances to make sure that we can deliver that quality product.”

“Obviously you want the menu made the same every single day. But giving employees a little bit more autonomy to help with the process and help to it what it is—they’re not just short-order cooks who are just dropping things in the fire,” Matzke-Hill adds. “They have some ownership and I think that’s helped as well.”