In two decades of business, Eggs Up has never closed a location.

Eggs Up Grill CEO Looks at the Sunny Side

Weekly off-premises has mixed seven to eight times higher during the pandemic.

Eggs Up Grill CEO Ricky Richardson describes the onset of the COVID-19 pandemic in March as an “earth-shattering event for everybody in the industry.”

So how does a fully franchised casual-dining brand that relies solely on the breakfast and lunch dayparts pivot when its status quo is fractured?

Richardson, who spent more than two decades with TGI Fridays, most recently as president and chief operating officer of Fridays USA before joining Eggs Up in July 2018, says it began with increased communication. The company comprises single-unit and multi-unit franchisees who operate 43 restaurants. Discussions between corporate and the franchise base ramped up to five to six days per week. The initial focus was protecting the health and safety of customers and employees, with an underlying message of “we’re all in this together.”

Then the conversation moved to business sustainability, and that meant helping franchisees stabilize their finances. Richardson says Eggs Up coached them on costs and reductions in business and gave them templates on how to reach vendors, landlords, and suppliers. As the Paycheck Protection Program came into view, the company spent more than a half-dozen calls solely on helping everyone understand the program. The advice worked as 100 percent of franchisees received loans.

To assist with financial flexibility, Eggs Up waived marketing and franchise fees and returned unspent local store marketing funds. Most of the U.S. has lifted government-mandated restrictions on dining rooms, so all stores are welcoming back dine-in guests both indoors and outdoors.

“We got a very long-term view and are very bullish on the brand opportunity,” Richardson says.

The next step is generating revenue, with off-premises as the essential piece. In February, Eggs Up started a test of an online ordering system with Toast as a POS platform. The company went from testing to full implementation in about five days.

During the pandemic, the brand has offered advice and operational support around curbside pickup and contactless ordering and payment. Eggs Up also remained active via third-party delivery and catering.

“That’s worked very well for us,” Richardson says. “… We’ve moved really, really quickly. [I’m] proud of the support we’ve gotten from our vendor partners as well as the ops team here and the marketing team to roll those things out and communicate with guests.”

Within the industry, questions remain about the loss of the morning routine and the resulting impact on the breakfast daypart.

The first two on that list are of utmost importance to Eggs Up, which operates from 6 a.m. to 2 p.m.

Richardson says it’s too early to tell how customers have changed their time-of-day preferences at Eggs Up. Same-store sales are down significantly, but he notes that they’re better than other figures he’s heard in the casual-dining industry. He’s pleased with where they’re starting as dining rooms reopen.

“I’ve read that obviously in industry publications that quick-service is seeing some shifts away from the morning segment into more afternoon and evening segments with their drive-thru because of that lack of daytime early morning traffic, but probably too early to tell for us,” Richardson says. 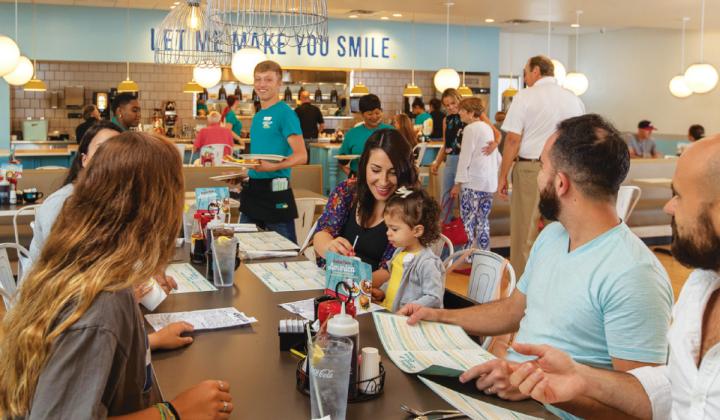 Richardson says that from the guest perspective, there will be a heightened awareness in regard to cleanliness

A big focus moving forward will be maintaining as much off-premises business as possible as dine-in guest return. This means leveraging a narrowed external menu to increase product quality, speed of service, and guest satisfaction so that off-premises becomes a consistent leg of the revenue stool.

Richardson says that from the guest perspective, there will be a heightened awareness in regard to cleanliness. But Eggs Up is prepared to meet that shift in sentiment.

“We’ve always received top scores in that area on all of our guest satisfaction surveys both from the type we commission and just general feedback,” Richardson says. “It’s a strength of ours and certainly a continued focus of ours.”

When it comes to human capital, Richardson says that he recently took a multi-day trip across the system where he consistently heard excitement and positivity among franchisees about top employees returning.

There have been concerns in the industry about employees not wanting to return to work, primarily because of enhanced unemployment benefits. Richardson estimates that about 15 to 20 percent of Eggs Up’s workforce will need to be replaced due to a worker moving because of his or her situation, unemployment benefits, or a worker deciding to leave the restaurant industry. Typically, each restaurant has 25 employees, so that’s about three to five workers at each unit.

From an overall industry perspective, Richard expects less saturation, either from legacy brands closing underperforming stores or single-unit independent brands not having the financial wherewithal to withstand the pandemic.

But at Eggs Up, Richardson foresees growth; in two decades of business, Eggs Up has never closed a location. Six to eight openings are planned for the rest of the year and there’s 12 to 15 more in the pipeline.

The earth may have shattered, but the pieces are starting to come back together.

“I’ve been really encouraged—despite everything—by the positive feel our franchise partners have about the brand and the future success of it and their willingness to continue to invest,” Richardson says. “… This too is going to pass and we’ll figure out a way through it.”