Dave & Buster's just popped a "poison pill" to prevents anyone from gaining control of the brand.

The eatertainment segment, which relies on large gatherings of consumers who primarily seek fun and games, faces an unknown future as the coronavirus outbreak continues in the U.S.

President Donald Trump recommended that people do not gather in groups of more than 10 people—a guideline that’s forcing entertainment restaurants and family entertainment centers to shut down completely for weeks, possibly months.

Main Event Entertainment, a venue that features laser tag, bowling, billiards, and other games, closed all of its 44 units. Pinstripes, a 13-unit brand serving Italian-American food and offering bowling and bocce, closed each of its doors as well.

Dave & Buster’s, which owns 136 units across 39 states, Puerto Rico, and Canada, has seen its stock plunge 89 percent in the past month, from $46.25 per share to $4.87 per share at closing on Wednesday. However, by mid-morning on Thursday, stocks shot up 91 percent after the company announced a shareholder rights plan that prevents anyone from gaining control of the brand through open market accumulation or other tactics.

In Q3, Dave & Busters reported a 4.1-percent drop in comp sales, which included a 4.6-percent decrease in walk-in traffic. Same-store sales lowered 3.9 percent in the amusement/other category and 4.4 percent in food and beverage. Operating income decreased 58 percent to $6.5 million.

In addition, Chuck E. Cheese released two game apps in which players can win virtual tickets that can be redeemed when stores re-open. To support employees, Chuck E. Cheese CEO David McKillips is donating his salary for the next three months to the employee relief fund, CEC Cares.

CEC said in its Q4 earnings call on March 9 that year-to-date comp sales were down 3.6 percent. The numbers were up in January, but slid in February and early March.

Michael Browning, CEO of Urban Air, an indoor adventure park, says revenue for the past 10 days is down 71 percent year over year. The number becomes even more sobering considering its spring break for many markets, which is usually the highest-performing part of the year. 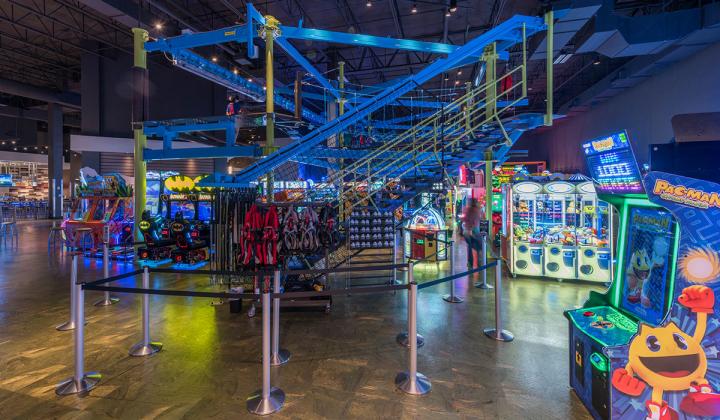 Main Event Entertainment, a venue that features laser tag, bowling, billiards, and other games, closed all of its 44 units.

Similar to other family entertainment businesses, all Urban Air locations have closed due to gathering restrictions. Before the pandemic began, the brand prepared contingencies in terms of rent, insurance payments, and debt service to assist its franchisees. Browning says he’s also worked to connect part-time employees with Amazon and Hello Fresh, a meal kit delivery service, which have increased demand because of mass self isolation.

Browning says he’s reached out to senators at the national and state level about relief as Washington, D.C. continues its discussion around a $1 trillion economic stimulus plan that would include funds for small businesses and direct payments to Americans.

“I go by the philosophy of everyone needs to suffer a little so no one person, company, or organization has to suffer a lot,” Browning says. “… Everybody will have a little bit of pain. We’ll write this off as the corona impact and we’ll move on and have a very strong economy and very strong businesses. But if people try to minimize their losses and sacrifice others, that’s where it starts to get unbalanced.”

Looking toward the future, Browning says even though his company knows facilities are safe and clean, public perception will be that the virus is still present. Urban Air’s plan is to educate consumers with a message saying “Urban Air is clean, has been clean, and will always be clean.” For the past several years, the brand has used a disinfectant to clean surfaces that lasts 90 days.

“And if we can get that first 20, those early adopters, to be brand ambassadors, like ‘Hey, I went and checked it out, it was really clean, we’ve gone home, it’s been five days, nothing’s happened,’ if we can really get people talking, the same way they’re talking now freaking out, [and get them] talking about ‘Hey, everything is safe again,’ we’ll get through this. But there’s definitely going to be a tail,” Browning says. “I tell my team, we’re going to get through the coronavirus, then there’s going to be a tail. The question is going to be, how short can we make the tail, and we’re going to do that through education.”

Browning says true leaders emerge during a crisis. To him, it’s more important than ever for companies to be transparent and do what’s best for the customer. For example, because Urban Air closed, the brand is allowing customers to get their money back, reschedule, or place funds on a gift card. Chuck E. Cheese said it’s allowing customers to reschedule or receive a refund on their deposit through March 31.

The key is making the best decision with the information you have at the time, Browning says.

"I think you just have to be raw,” Browning says. “You can go to sleep tonight and wake up tomorrow and the world could be completely different than when you went to bed. You can’t overthink this. You have to make the decision quickly. Speed wins in this game. You have to make quick decisions with the information you have and not worry that you might have to contradict yourself tomorrow. That’s just a part of how fast things move in a crisis.”