Because of lower staff requirements, workers earn $25 plus tips at the Clemmons, North Carolina, store.

The chain found success with a hybrid model that's earning $1.65 million in AUV.

Years ago, while driving into work, East Coast Wings founder and CEO Sam Ballas had an epiphany—to disrupt everything the chain worked on for almost two years.

But on that day in his car, Ballas thought about a new future. A fast-casual one.

“One day, I woke up at home and from the hip thought to myself, our development calls have gotten a little bit erratic,” he says. “How do we sustain an attractive investment for future candidates for the franchise model?”

His idea was to shrink East Coast Wings’ footprint and reengineer its look and size entirely.  Instead of the original 4,500-square-foot restaurants, he wanted 2,500 to 3,000 square feet of space. Now, $800,000 investments would become $500,000. The reengineered model was called ECW 2.0 and achieved a 30 percent reduction in development costs, a 27 percent cut to square footage, and an average increase of 12.5 percent in gross sales. AUV is also nearing $2.4 million.

But when Ballas approached his team about bringing a hybrid, fast-casual-like unit to Clemmons, North Carolina, by relocating a newer store, there were doubts. He sat back and listened to all the input.

“I thought to myself, I don't want to disrupt the talent that I have and all the great focus that we're in at that time,” Ballas says. “So what can I do to proof my theory? … If I can prove this box, that relocation, and a better revenue build, it may be the stepping stone for creating the fast-casual East Coast Wings + Grill.”

To show how much he believed in the idea, Ballas invested his personal money into relocating the store. COVID arrived before the restaurant could open, and the CEO realized that if the concept worked during a pandemic, that would be the strongest indicator of its long-term potential.

Offering only 14 tables and four patio seating areas, the transformation worked. The 2,290-square-foot location, which opened September 2020, reduced development costs of $100,000 and lowered staffing requirements. The restaurant is on pace to do $1.65 million in AUV, 16.5 percent in EBIT, and increase revenue by 120 percent.

“I do think that casual dining is going into a new phase of what that definition is going to mean,” Ballas says. “And I feel 100 percent confident that we were ahead of that curve.”

The overall investment was under $400,000, and the unit outperformed initial franchise launch numbers with less than half the size.

With smaller labor requirements, the average server at the Clemmons location brings home around $25 an hour with tips. 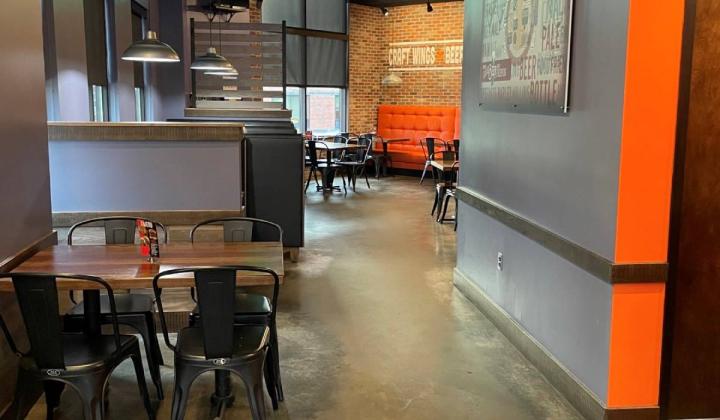 Inside the store in Clemmons, North Carolina.

This success led Ballas to a larger question. Could East Coast Wings thrive with a model that was even more traditionally fast casual? One where customers would walk up to the POS system, pay for their orders, get a beverage, and wait for their food?

The company is currently exploring this question as well as unveiling a more industrial, younger look.

Ballas says several stores have broken $3 million in sales in rural North Carolina. Some franchisees have more than doubled their revenue in a 12-year run with the brand. With new franchise candidates, East Coast Wings looks solely for footprints between 2,400 and 3,000 square feet.

“I think, quite frankly, that this inflection disruption with COVID has changed everybody's perception when it comes to food, period,” Ballas says. “And I don't think it's ever going to be like it used to be in the old days, and why should it? I think that disruption creates people that have the opportunity to put more shoulders against the wheel in companies and more brain power in debate because it creates better results. It creates better innovation. It creates a better evolution.”

In 2022, franchisees will get to choose between the larger volume full-service restaurant model and hybrid units that average 2,300 to 3,000 square feet, Ballas says. As more data comes in, the brand is also looking later in the year to launch its traditional fast-casual franchise model in which customers fully order their meals with a cashier instead of a server.

No matter the model, Ballas says the food quality will remain the same. East Coast Wings has been the “800 pound gorilla” across franchise systems, he says. And this fast-casual transformation is an extension of East Coast Wings’ current positioning.

“Unit level economics has always been our beating drum,” Ballas says. “In that process, as a casual dine, we made a commitment at the launch of the brand: we would grow the brand as far as market share and surrounding states at a pace that we can sustain that drumbeat.”

In July 2020, Ballas was quoted for saying that it wasn’t prudent to sell franchises due to the uncertainty of COVID-19. He had to recant his theory, he says, after he witnessed his own brand and several others surge ahead with higher sales than 2019.

In 2022, East Coast Wings plans to open seven locations and double the footprint in around three years.

“This is going to sound terrible, but it's been a great two years of epiphanies,” Ballas says. “It's been that way for us because we do embrace inflection. We know we do a lot of great things, but we're not immune to inflection. We are very good at taking disruption, and then tackling that beast into something that we can tame, and come out the other end positive.”

Ballas says consumer behavior has changed. Even though founders can get emotionally attached, they can’t let that get in the way of the brand’s ability to grow.

“We can't sit on the sidelines and just stay status quo,” Ballas says. “You have to adapt and you have to evolve.”