Bloomin' Brands CEO David Deno recently told analysts his team is "ruthlessly focused" on executing key initiatives in 2022—a strong sentiment, but necessary given the brutal macroeconomic environment it's up against.

The second quarter is expected to be the company's most inflationary period of the year. Commodity inflation was in the high teens and labor was nearly 10 percent. To maintain value for customers, Bloomin' carried 5.8 percent in pricing, which wasn't enough to offset rising costs. As a result, operating margin was 7.8 percent, down from 11.6 percent last year.

Commodity is likely to be in the mid-teens in Q3 and low-double digits in Q4, and labor should be in the high-single digits and mid-single digits during the same stretch, as Bloomin' laps rising inflation in the back half of 2021. For the fiscal year, the chain expects commodity inflation between 13–14 percent, an increase from its previous guidance of 11–13 percent.

Still though, Q2 margin was 320 basis points above 2019 levels, and Bloomin' is still committed to its long-term goal of 8 percent operating margins.

The Outback Steakhouse parent plans to add a 2 percent menu price increase in either late Q3 or early Q4, which would put the company at roughly 6.5 percent for the back half of 2022. But Bloomin' doesn't plan on reaching its margin goals through pricing alone.

"What we try and do is have productivity plus pricing offset inflation," Deno said during the chain's Q2 earnings call. "Now this year, the inflation was very high. So we haven't priced all the way to inflation. And our productivity efforts remain strong, but we will continue to price below inflation to make sure we keep that value equation going. Is there some price in the back half of the year? Yes. But we will price below inflation probably to keep our value equation going."

To increase efficiency, Bloomin' is in the process of implementing advanced cooking technology and kitchen display systems in the back of house, and a handheld tablet system for servers in the front of house. The cooking equipment should finish rolling out in the back half of 2023, which is longer than expected because of supply chain issues. Distribution of handheld devices should be completed in by the end of the year. The rollout of KDS tech will run a little into 2023.

At the end of Q3, Bloomin' will have installed the full equipment package at about 140 restaurants. Although Deno didn't share exact labor savings for competitive reasons, he did note stores are seeing a smaller headcount in the kitchen, improved order accuracy, better table turns, and higher customer satisfaction.

"We have more demonstrated achievement," Deno said. "We're very optimistic about it, but it's probably a little too early to provide some real specifics. But we are seeing it in back-of-the-house labor and in our customer measures."

In addition to productivity initiatives, CFO Chris Meyer said building in-restaurant dining is the best way to drive higher margins, in addition to growing digital opportunities and catering, which both have favorable ROIs. In the second quarter, roughly 75 percent of U.S. off-premises sales came through digital ordering channels. That's thanks in large part to a new online ordering system and mobile app instituted last year. Both have outperformed expectations; the app in particular has more than 2 million downloads. Outback launched catering nationally in April, following the successes of sister chain Carrabba's, which saw its catering channel soar 46 percent in 2021 versus 2019.

"Clearly, coming into this year, who would have thought the inflation was going to look like it did?" Meyer said. "So there's a lot of variables that can change, but we are committed to achieving this 8 percent operating margin target, and we think we have the levers moving forward that we can do that." 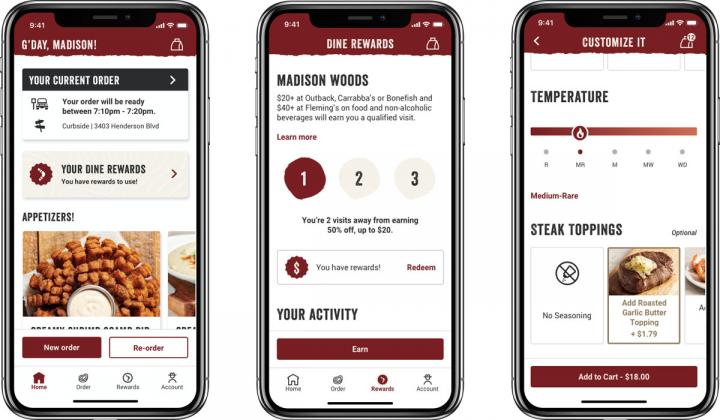 "In fact, in some of our brands, we're seeing continued trade up, and so that's been really strong for us," the CEO said. "And so that's one of the reasons why we want to continue to invest behind the marketing and talk about our value and some of the other things we can trade up to in our business that we're seeing. So the consumer, for us, is hanging in there."

Blooomin' earned $1.13 billion in Q2 revenue, a 4.4 percent increase year-over-year, fueled by a $58 million rise in international restaurant sales. The company raised its 2022 revenue guidance to $4.4 billion to $4.45 billion, up from $4.35 billion to $4.4 billion. The bump is driven by higher-than-expected U.S. and international revenues in the first half of 2022, a planned increase in marketing investment in the final six months of the year, and incremental pricing.

Deno said Bloomin's marketing will be heavily digital, and won't include deep discounting.

"If you look at just our menu offerings at Outback in particular, the combos that we have and some of the other values that we have are very compelling, especially when you line them up with other players in the industry, and we're going to talk about that," the CEO said. "And the thing that we have about marketing is, we've learned so much on digital we can have tremendous flexibility. We can toggle it up or down depending on the returns that we're seeing."

In terms of development, Outback—which has 693 U.S. restaurants—is continuing to pursue new trade areas and fill-in opportunities with its smaller, less expensive prototype. The steakhouse is on track to open 16 new stores this year. There are 135 units in Brazil, but Bloomin' feels there's room for 240. Carrabba's is looking to expand in key markets, as well.

"In my career, some of the best moves that we made in companies I've been involved is when the economy is a little tough," Deno said. "You can really make headwind on sites, maybe saving some cost, etc. ... I can tell you looking at the pipeline that our real estate team is developing, especially at Outback, we're seeing some really great sites in the right trade areas, in the right parts of the country with really good returns, and that pipeline is growing."