Last year, a number of restaurants saw opportunity to strike in the M&A market, from RBI’s $1 billion purchase of Firehouse Subs to SBP Hospitality’s $220 million acquisition of J. Alexander’s.

And it appears the buy/sell market has begun to gain again in 2022. Just a month after Dave & Buster’s announced intentions to acquire Main Event for $835 million, Denny’s revealed earlier this week that it will purchase the Southern-based Keke’s Breakfast Café for $82.5 million.

The chain, which has 52 restaurants (44 franchises and eight company-owned stores) will provide Denny’s an entrance into the highly competitive a.m. eatery space.

“The current founders have done a great job establishing a brand in a category frequently used by millennials and Gen Z families with kids,” Miller said during the Q1 earnings call.

While Denny’s relies on business during the morning daypart, Miller said he is not concerned about guest cannibalization, primarily because Keke’s entrée prices are roughly 20 percent higher.

READ MORE: 22 Restaurant Deals that Changed the Industry in 2021

“I wouldn’t say recession proof per se, but much more recession resistant,” he says when describing the chain's resiliency.

Another benefit of adding Keke’s is it will allow further penetration into existing markets. Miller said franchisees in places like Los Angeles, San Francisco, San Diego, Las Vegas, and Phoenix will have an opportunity to expand without compromising their current units.

“It’s a headwind to grow materially more in those markets with some of our best franchisees operating there looking for an opportunity to grow,” he says. “They can now do it inside the same family.”

Denny’s acquisition of Keke’s also allows existing franchisees to further expand into the world of breakfast. Currently, agreements do not allow operators to compete in the breakfast space, but since Keke’s will fall under the Denny’s umbrella, this would give them permission to do so.

“They don’t have to go as far from home or have as many other brands in their portfolio,” Miller said.

Denny’s saw systemwide same-store sales jump 23.3 percent compared to 2021. Miller said half of that growth can be credited to higher guest check averages, which was fueled by roughly 6 percent carryover pricing, nearly 2 percent additional pricing in February, and almost 4 percent product mix benefits. The chain is still struggling to regain pre-pandemic operating hours. Only 51 percent of domestic units are operating 24/7.

Off-premises sales for the quarter were nearly double that of 2019, driven mainly by third-party channels and Denny’s two virtual brands. 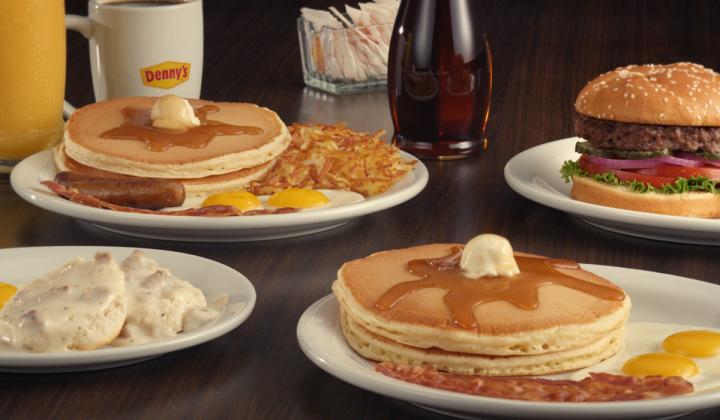 Company restaurant sales were up 31 percent at $44 million, which CFO Robert Verostek attributed to reduced dine-in restrictions and limited operating hours in the prior-year quarter. Company restaurant operating margin was $5.4 million compared to $3.4 million during the same period in 2021.

Commodity and labor inflation were both felt by Denny’s at 15 percent and 10 percent, respectively.

Despite operational hurdles, Denny’s is moving forward with introducing new kitchen equipment throughout its system. It will be used to make bacon crispier and sausage more evenly brown and allow for freshly baked bread.

More than 300 locations have received this new equipment, with the remaining balance of installations expected to be completed later this year.

Additionally, the brand is testing a new cloud-based restaurant technology platform, which will soon enter the beta testing phase. It's expected to be introduced systemwide by the end of 2023.

“Both the kitchen equipment and the technology platforms are expected to enhance the guest experience and drive operational efficiencies while the former also provides the ability to further upgrade our menu across all dayparts,” Miller said.

Franchisees completed six Heritage 2.0 remodels, while the company finished three. Franchisees opened five new units during the quarter, including one international location in Canada and two ghost kitchens in Baltimore via REEF Kitchens. The ghost kitchens will serve as a testing ground for new consumer reach in underrepresented metropolitan markets.

On Tuesday, Denny’s announced Kelli Valade would be joining the company as the new CEO effective June 1. The news comes after CEO John Miller’s early April announcement he would be retiring. Miller said he will stay through August 3 to ensure a “seamless leadership transition.”

Valade comes to Denny’s after an eight-month stint as CEO of Red Lobster. She has 30 years of experience in the restaurant industry, including roles as president, COO, and senior vice president of human resources at Chili’s parent Brinker International. Valade also spent time as the CEO of Black Box Intelligence, a position she held for two years.

“We are delighted to announce that Kelli Valade will become our next chief executive officer and president,” Miller said. “She has 30 years of restaurant industry experience in multiple executive leadership positions and brings a proven history of developing and executing bold strategies. She is absolutely the right person for the job, with the energy to not only drive our business forward, but to accelerate our growth.”

In addition to Miller, President Mark Wolfinger will retire effective June 1. He’s been with Denny’s for 17 years and has also served as CFO and chief administration officer.

“The future of this organization is indeed bright,” Miller said. “We have a steadfast and thoughtful board of directors, and new energetic and experienced CEO and president joining shortly, an exceptionally talented and tenured management team and a new complementary brand that will accelerate our growth.”