Growth has never been faster for the company.
November 2018 Danny Klein

To put it lightly, this past year has been a transformational period in Del Frisco’s history. But whether or not these broad changes, including the acquisition of two brands and the sale of another, have bolstered or stressed the company’s portfolio is something chief executive Norman Abdallah took head on during Del Frisco’s third-quarter recap.

“We realize that there is a great deal of skepticism around the new DFRG,” he said, spotlighting the risk of integration, elevated debt levels, and dilution from a recent secondary offering.

Abdallah and executives tried to alleviate those concerns with progress updates, a more conservative approach to capital expenditures in 2019, and expected cost savings in G&A and purchasing, not to mention a growth rate unprecedented in the company’s past.

In the short term, however, sales swung a negative picture. The company came out with a quarterly loss of $0.07 per share compared to last year’s loss of $0.03. Del Frisco’s posted revenues of $105.30 million compared to the year-ago figure of $73.34 million.

On a concept-by-concept basis, three of the four chains in Del Frisco’s lineup reported red same-store sales. The same was true of customer counts.

For some background, Del Friscos completed the $325 cash transaction of Barteca Restaurant Group (bartaco and Barcelona) June 27. It then completed a $32 million sale of Sullivan’s Steakhouse to Romano’s Macaroni Grill September 24.

The integration risk and reward

Abdallah said the integration of Del Frisco’s major back-end support systems is tracking to go live during the first half of 2019 and full integration is planned by mid-2019. This is at the early end of the company’s 12- to 18-month timeframe laid out when the transaction was first struck.

“Once completed, we will see cost-saving opportunities in G&A and purchasing across the portfolio because of greater scale, combined know-how and capabilities for a best-in-class supply chain,” he said. “These savings are now likely to be at the high end of our $3 million to $5 million range, with significant run rate savings beginning in the second half of 2019.”

What Barcelona and bartaco, especially, inject immediately into Del Frisco’s company are actionable growth vehicles. There are no Grilles expected to open in 2019 or 2020. However, three to four Barcelona locations are on tap for next year and six to seven bartacos. Leases are signed for all of the sites.

Through the first three quarters, Del Frisco’s opened two Double Eagle units, a Grille, and one bartaco. Two bartacos and one Barcelona store opened in the first half of the year under previous ownership. In Q4, a Double Eagle—Del Frisco’s first on the West Coast—opened in downtown San Diego. Two Grille locations, one in Philadelphia and one in Fort Lauderdale, are still planned. As is a Barcelona in Charlotte, North Carolina, and two bartacos—one in Massachusetts and another in Dallas. This would bring the total of 2018 openings to 10 for a total of 13 (including the previous openings). That would signal a record number of annual openings for Del Frisco’s, and is a sign of things to come.

“Between now and the end of 2021, our intention is to grow our footprint by 10 to 12 percent annually, focused on our three highest-returning brands,” Abdallah said. “Typically consisting of two to three Double Eagles, two to three Barcelona Wine Bars, and four to six bartacos each year.” 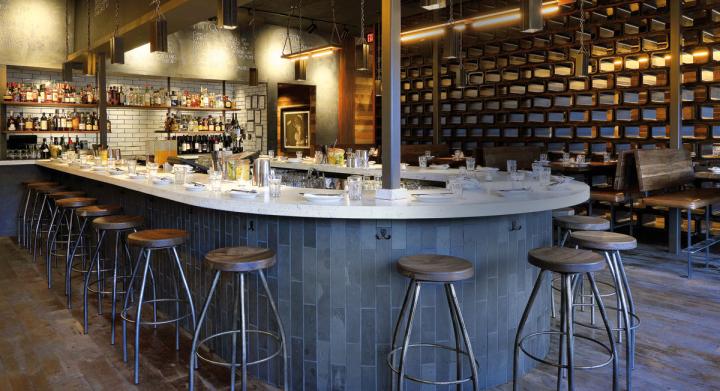 What’s going on with bartaco?

As the growth rate suggests, bartaco is poised to lead Del Frisco’s annual expansion in regards to sheer volume. But the 16-unit tapas concept absorbed a significant traffic and comparable sales dent in the quarter. Typically speaking, Bartaco is a high-performing operation that averages north of $1,000 per square foot and average-unit volumes of $5.2 million at mature stores, as well as restaurant-level EBITDA margins of 29 percent.

But as strong as the chain has been to date, there is work to be done so bartaco can leverage the larger company’s standing in real estate and operating procedures. Del Frisco’s closed two underperforming bartacos in Asheville, North Carolina, and Homewood, Alabama, in early Q4. Abdallah said these closures were the result of “due diligence pre-acquisition and were anticipated at that time.” The company also shuttered a Grille in Houston in Q3 and plans to close a Chicago Double Eagle early next year. No other closures are currently planned, he added.

“Notably, our combined organization now has significantly more leverage with developers and landlords than ever before,” Abdallah said. “This is because we not only bring to the negotiating table distinctly positioned growth brands with industry-leading yield economics, but also the respect that Del Frisco’s name has in the marketplace.”

The 7 percent drop in same-store sales at Bartaco, Abdallah said, was principally due to the negative year-over-year impact of an incident at one location, which Del Frisco’s has started to lap in Q4. Bartaco was also hurt by weather in its Northeast base. Additionally, the chain was also measuring against its highest quarterly comps in 2017, buoyed by weather on the reverse scale, at 11.1 percent.

Trends stayed negative through the first few weeks of Q4, he added, but have turned “strongly positive” since Del Frisco’s lapped “the incident.”

As for what Del Frisco’s was referencing, it likely relates to an incident in October 2017, when hepatitis A exposure temporarily shut down bartaco’s Port Chester, New York, location. Less than a week later, a class-action lawsuit was filed for alleged negligence and damages. Thousands claimed they visited bartaco between August 22 and October 23, the timeframe Westchester County health officials said patrons could have been exposed to hepatitis A virus from an infected employee. The Health Department closed the store October 25 and cleared it to reopen a day later. The lawsuit filing alleged bartaco caused damages to more than 3,000 diners who received preventative treatments, including vaccinations, from the county. Read more about the incident here.

“Port Chester continued to have a significant drag on overall comps,” said Neil Thompson, Del Frisco’s CFO. “Excluding this location, comparable restaurant sales would have fallen 2.1 percent in Q3 versus a year ago. On a two-year basis, excluding Port Chester, same-store sales improved sequentially in Q3 to 8.4 percent from 7.5 percent in Q2, demonstrating the continuing strength of the brand.”

He said bartaco’s same-store sales are up 9.9 percent in the first 12 days since lapping the incident.

Thompson added that the Northeast region experienced 30 more days of rain and twice as much rainfall in Q3 this year versus the prior year. This led to five bartacos in the Northeast experiencing a 14.1 percent decline in same-store sales, or a 7 percent decline if you excluded Port Chester. So the rest of the comp footprint across Atlanta, Nashville, and Florida increased 1.9 percent.

“Bartaco's three 2018 openings are also performing well, with two of three performing ahead of expectations and one slightly below expectations. Overall, we are on track to exceed our 40 percent return on invested capital target,” Thompson said.

Abdallah said Del Frisco’s wants to make sure the brand grows smartly, and has set a high bar to approve new restaurant openings. All new sites are approved based on achieving a minimum of 35–40 percent return on invested capital after tenant allowance, and excluding preopening costs by their third year of operation.

Excluding patio business, regular and private dining same-store sales rose 3.6 percent at Del Frisco’s Grille. Wine sales increased 9.3 percent and private dining continued its run of growth, boosting 54 percent, year-over-year, in Q3. The company credited this to a reintroduction of sommeliers. “Our traction in these areas is not only indicative of the health of the business guests but also our own emphasis on marketing, improving our private dining menu offerings and our internal management systems and processes,” Abdallah said.

“As we head into the holiday season, private dining becomes an even greater opportunity for us to really demonstrate our capabilities. And we are pursuing these with centralizing resources, using a new software platform and a focus on ensuring a flawless experience from beginning to end,” he added.

Double Eagle’s private dining is up nearly 20 percent in the first few weeks of Q4 and bookings for the rest of the quarter are up more than 20 percent compared to this time last year, Abdallah said.

Del Frisco’s is courting this boom. A Back Bay unit, for example, has six private dining rooms compared to the two at a Seaport location.

Since Scott Smith moved into a president role at Double Eagle following the Sullivan’s sale (he held that position at the steakhouse since January 2017), the chain rolled out a new private dining target. They also introduced a private-dining package to the private-dining sales team. The new technology records private dining and allows sales and event planners to get back within 24 hours, book the part, and set it up.