The brand ended fiscal 2021 with 144 units, including five openings.

Discounting Omicron, the brand is 'on fire,' interim CEO said.

Kevin Sheehan, who has served as Dave & Buster’s interim CEO since Brian Jenkins’ retirement at the end of September, is fully aware when a new executive comes in, he or she will have free range to shape future strategies.

The 68-year-old industry veteran said the brand deserves a younger, energetic individual who can steer the brand for the next five-plus years. Sheehan noted he’s been “working like mad” to interview and vet candidates, and that multiple “very serious” individuals have separated themselves. He’s hopeful over the next quarter, Dave & Buster’s will have its new leader.

In the meantime, Sheehan remains sensitive to the reality any new chief executive will bring his or her own idea to the table. But that’s not to say Dave & Buster’s is going to sit idle as it waits.

“We have so much opportunity here that are clearly things that we could do that anybody coming in would say, ‘Wow, that makes sense. That makes sense,’” Sheehan said during the brand’s Q4 and 2021 earnings call. “So we're running on all of those, but also being thoughtful not to take away from the great opportunity of a new person coming in.”

Dave & Buster’s is in the process of pulling multiple levers to entice walk-in customers.

For instance, the chain is upgrading its late-night segment with a new happy hour initiative featuring nationally known DJs. To draw customers during weekdays, Dave & Buster’s is bringing back its Eat & Play Combo in which customers receive an entrée and $10 game card for $15.99.

“When we take a step back and just look at our business, seven days a week, the vast majority of our businesses coming through on that Friday, Saturday, Sunday period,” CFO Michael Quartieri said. “So we also got to look for opportunities on how we could build them midweek, whether that's through promotional opportunities that we now see that are available and the like.”

In terms of food and beverage, the chain established a new cadence of four LTOs per year, piggybacking off the brand’s “Inspired American Kitchen” menu launch in May 2021. In Q4, Dave & Buster’s rolled out a new beverage menu that COO Margo Manning said elevates the experience, adds flavor profiles, and improves relevancy.

The eatertainment concept also forged partnerships with WWE and UFC for pay-per-view events, brought more attention to the NCAA Tournament with visible signage, invested in live remote streaming of DJ sets and stand-up comedy, launched reservation capabilities via website and OpenTable, and developed a rewards program.

“Tighten your seatbelts, as we are on the move,” Sheehan said.

In Q4, same-store sales dropped 2.6 percent compared to 2019 when excluding 14 stores that operated under vaccine mandates. Including those units, comps declined 6.8 percent. By month, same-store sales grew 7.5 percent in November, but decreased 14.9 percent in December and lowered 8.4 percent in January, showcasing the magnitude of the Omicron variant. For all of 2021, comps lowered 10.5 percent versus 2019.

Sheehan said the brand came close to setting the Q4 revenue record, despite Omicron’s pressures. The chain earned $343.1 million in the quarter, 1.2 percent down from two years ago. 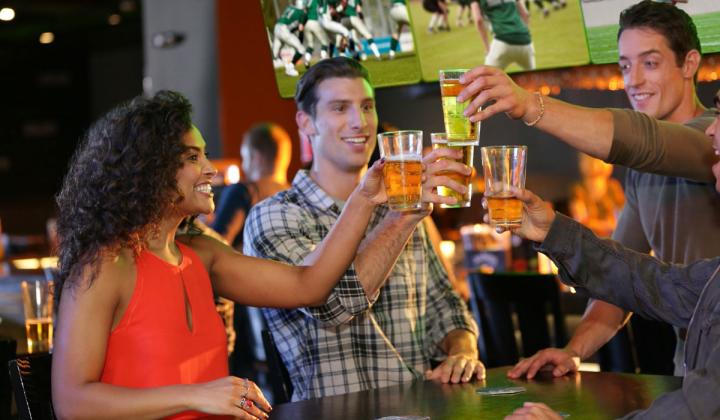 Two key factors helped offset 20 percent labor inflation. For one, amusement, which doesn’t require as much labor, mixed 65 percent in the quarter compared to 56 percent in 2019. The second reason is the chain’s new model in which dine-in customers can order through xDine, an integrated online ordering platform. The solution increases the number of tables one server can handle by roughly 33 percent, meaning fewer bodies and higher pay.

For commodities, Dave & Buster’s is seeing rising costs around meat, and the chain mitigated those increases with pricing of 5 percent. Quartieri views this menu price inflation as reasonable compared to what the brand has seen in the market, especially since it didn’t take any price prior to fiscal 2020 and 2021.

With COVID receding in February and March, comps rose 5.4 percent versus 2019 in the first eight weeks of the first quarter. Walk-in business is up 9.1 percent quarter-to-date versus pre-pandemic times and special events business is down 42 percent, but that’s a stark improvement from the 58 percent drop it witnessed in Q4.

“So you can really fully understand that other than the Omicron, this business is on fire,” Sheehan said. “And it's just the beginning of it. We've got so many things that we've talked about on other calls that we're starting to shape to drive demand.”

The brand ended fiscal 2021 with 144 units, including five openings. Internal studies and third-party research shows the brand has room for 230 locations throughout the U.S. and Canada, according to the company’s SEC filing.

In 2022, Dave & Buster’s plans to open eight stores that will each hover around 25,00 square feet, but Quartieri said there will be some opportunities to enter spaces larger than that. As the company navigates past those store openings, the brand will leverage a development pipeline that takes it through the end of 2024.

“It's really about what the location allows for, as opposed to, we're only going with a set target and that's it,” Quartieri said. “So we have some flexibility around that and that's what the plan is for these eight stores coming this year."

The brand will also begin a formal remodel program to bring its legacy stores in line with its latest prototype. Sheehan said it will take two to three years to get through all the locations, but once that’s complete, the footprint will remain on a seven-year refresh cycle.

Dave & Buster’s will spend $200 million in capital additions in fiscal 2022, with 70 percent going to new stores and improvements to existing units, 10 percent for games, and 20 percent for infrastructure upgrades and replacements.