Dave & Buster's is going all-in on the experience.

Dave & Buster's Plan to Put the 'Wow' Back Into Restaurants

Dave & Buster’s comps have tracked negative in seven of the last eight quarters.

Chief executive officer Brian Jenkins credited a few factors for the volatile estimates, including lapping a VR launch that proved difficult to match, weather impact of about 80 basis points, and competitive intrusion and cannibalization. Jenkins said Dave & Buster’s own success and profitable model inspired a category boom. The base of stores impacted by either competition or cannibalization grew in the quarter, from 40 percent in Q1 to 45 percent.

CAN FOOD PLAY A LARGER ROLE AT DAVE & BUSTER'S?

“There is no question that we are in an attractive and growing category, as consumers continue to increase spending on experiences,” Jenkins said. “As a leading brand that delivers most of experiences, we are in a great position to capitalize on this favorable secular trend. At the same time, this trend and our success has attracted many more players in the space, and the overall market today is quite fragmented and competitive.”

On that note, the question now becomes how can Dave & Buster’s dig its flag even deeper into the experience-driven ground. Improving food and beverage is a natural place to start. Over the past two years, Dave & Buster’s sliced its menu 35 percent and replaced or recrafted 75 percent of its offerings. But today’s eatertainment reality is that menu fixes are not enough to drive frequency to the level where it offsets competitive intrusion.

And it also doesn’t erase what remains a challenge for viewing-centric concepts across the sports bar and grill landscape: How do you get customers off the couch? In the past, the answer was, simply, provide them an experience they can’t get at home. But now, it’s also about presenting an atmosphere and offering they can’t get at one of the many other like-minded concepts in their market.

As Jenkins noted, the eatertainment field has gone from niche and revolutionary to fractured and fierce.

For Dave & Buster’s, the 2019 version of this challenge is evolving past just food and drink quality to in-store revitalization. Mainly, reenergizing the dining areas of its restaurants to drive F&B attachment. Jenkins called this “wow” experiences.

The focus begins with Dave & Buster’s fresh “wow walls.” They’re nearly 50-foot-wide LED TV screens that can show up to six games at once, designed with stadium sound and equipped for viewing parties and other social events, like esports.

Check out the video below to dive deeper into the new tech:

Dave & Buster’s began testing the idea late last year at its Dallas store, which is one of the top two or three performing stores in the system, Jenkins said. The display technology is customizable by restaurant, and Dave & Buster’s expects to add 35 additional units by the end of October as football season kicks into high gear.

Additionally, the brand plans to extend LED technology to its sports lounges to drive reach, frequency, and F&B penetration by being “one of the best and most innovative sports touring destinations in the country,” Jenkins said.

The force behind the wow walls, he added, is to bring juiced-up energy to a space that wasn’t attracting enough repeat guests before. Dave & Buster’s complemented the technology with furniture and flooring improvements. “Our view is that one, it’s a great path toward F&B,” Jenkins said. “Further F&B penetration, drive people into a space that is today highly underutilized, our dining rooms. It brings a whole new experience, and we have seen outsized performance.”

Jenkins didn’t get into the specifics of the Dallas store, only to say its F&B business is besting other units in Dave & Buster’s fleet. 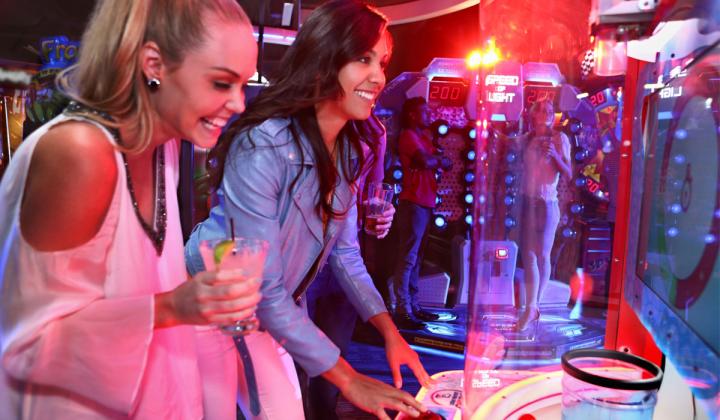 Dave & Buster's tends to be a low-frequency brand. Can a more immersive F&B experience change that?

Another trigger for optimism, Jenkins said, is that Dallas’ success came without any serious marketing force. The awareness was a slow build. But, moving forward in Q3, Dave & Buster’s is going to invest in digital media to bright light to the wow walls. “I think it does build over time,” Jenkins said of awareness, especially at a generally low-frequency brand like Dave & Buster’s. “But we feel very confident in what this is going to do and add to the brand experience.”

Essentially, picture the change as a fire starter for generating more traffic to Dave & Buster’s dining rooms around sporting events and other big-screen activations.

“Our view is that our dining rooms, based on the square foot that we've allocated to the spaces and the utilization rate that we get today, it speaks to a need to revitalize the area. So, the Wow Wall is our answer to that,” Jenkins said.

While this physical revitalization unfolds, Dave & Buster’s will continue to refine its menu and simplify in favor of better execution, Jenkins added. Guest satisfaction scores have improved, both from a food quality perspective as well as speed of service, since the cutbacks. After a Hawaiian-themed summer LTO, Dave & Buster’s has a grilled chicken avacado sandwich and New York strip planned for October, which will arrive along with the removal of some slow-moving items.

Yet the biggest near-term chance remains in igniting F&B penetration through an immersive experience—an experiential element that attracts customers and keeps them engaged, and ordering.

Dave & Buster’s brought back its $19.99 Unlimited Wings promotion on game days in Q3. It now includes a $10 Power Card instead of unlimited gameplay, which should help per capita spend in amusement. That’s a return to how Dave & Buster’s originally launched the promotion. Last year, Dave & Buster’s didn’t feature the unlimited wings deal and lagged transactions in response, leading to a quick course correction. “So, this year, we'll be starting with that in combination with this wow wall investment in a large nucleus of stores, and we think that's going to make for a powerful combination,” Jenkins said. 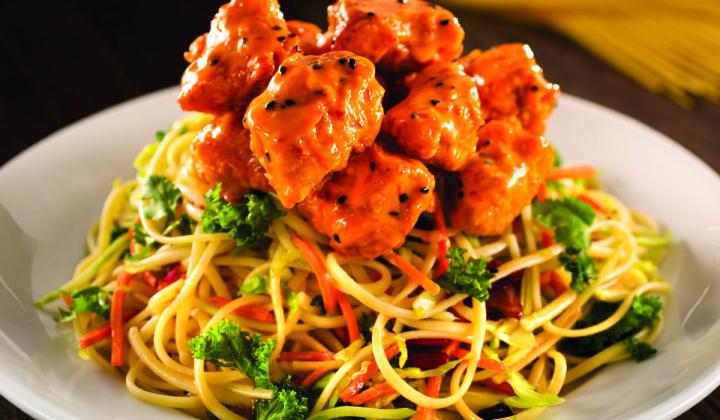 Dave & Buster's continues to remove complexity from its menu in favor of better execution.

More changes on the horizon

A big part of Dave & Buster’s revitalization efforts will include Jackman Reinvents, a company the chain is familiar with. The brand engaged the firm in 2010 when it was fighting to recapture lost momentum. They worked on a new brand purpose and set the stage for Dave & Buster’s IPO. The learnings there centered around Dave & Buster’s consumer perception. Jackman Reinvents found the brand resonated among a small group of core users, but was losing ground more broadly, particularly among millennials. It led to format refinement, pilot renovations, and new offerings (such as D&B Sports) around the mantra “First Choice for Frequent Fun.”

Now, Dave & Buster’s has reengaged the company “to take a comprehensive look at our store portfolio and offerings to assist with our brand revitalization and a strategic refresh,” Jenkins said.

It’s too early to predict what will come of the renewed deal, he added, but it’s worth remembering how broad the changes were last time around. Dave & Buster’s created new offerings and approaches to its business, and could again, although it’s tough to predict at what scale just yet.

“With all of the projects underway and as new strategies emerge from our engagement with Jackman, we will maintain new store development flexibility and optionality, not only for our store revitalization efforts, but also to execute new initiatives,” Jenkins said.

Dave & Buster’s new mobile app is set to launch later this quarter, too. It allows guests to use their phones to quickly purchase and recharge digital power cards, TAP & PLAY games, and earn loyalty points.

From the brand’s perspective, it lets Dave & Buster’s connect directly with customers and deliver targeted, personalized offers, whether they’re in-store or outside the four walls. The app will give the chain actionable guest data. It will be promoted on TV and through digital media. Jenkins added that Dave & Busters 12,000 guest-facing employees will also be tasked with building awareness.

The chain remains on track to open 15–16 new locations in fiscal 2019, presenting unit growth of about 12 percent. At the top end of the range, Dave & Buster’s expects to debut 11 large and five small-format stores, and will skew toward new markets. Three locations opened in Q2, including Winston-Salem, North Carolina; Natick, Massachusetts; and Gaithersburg, Maryland. Huntsville, Alabama, and Concord, California, restaurants have opened in Q3 so far, with McDonough, Georgia, and Wichita, Kansas, scheduled for later in the period. As of September 4, there were six stores under construction and 132 venues open.

Jenkins said the brand’s 17,000-square-foot Corpus Christi small-format store, which opened in late 2018, is on track to generate year one sales of more than $8 million, along with roughly 35 percent store-level margins and 50 percent cash-on-cash return.

“While we're not suggesting all 17K format stores will generate this level of performance, Corpus Christi, given straight, a potential, efficiency and return of a smaller 17K format store, with such attractive opportunities are available to make compelling financial sense to pursue them,” he said.

But with a heavy focus on revitalization right now, Dave & Buster’s is preserving the optionality on new-store openings in the back half of 2020 and 2021, Jenkins said.