Darden CEO: M&A is Always on the Table

The Olive Garden parent believes it has the scale and balance sheet to explore M&A opportunities and grow its existing restaurants organically.

“I will say that our biggest competitive advantage is what we talked about is our scale. And one way to build on that is to do an acquisition,” CEO Rick Cardenas said during the company’s Q4 earnings call. “And so we will continue to speak with our board and use our strong balance sheet and our cash position to evaluate any alternative to allocate that capital. But we do believe that we have the ability to do both, to increase the number of units that we are building and to do M&A.”

In a 10-year stretch, Darden spent more than $2.5 billion to grow through M&A. In 2007, the company agreed to buy Rare Hospitality, the parent of LongHorn Steakhouse and Capital Grille, for roughly $1.19 billion. It purchased fine dining concept Eddie V’s for $59 million in 2011, Yard House for $585 million in 2012, and Cheddar’s Scratch Kitchen for $780 million in 2017. Darden’s remaining brands, Olive Garden, Bahama Breeze, and Seasons 52, were original creations.

A number of chains in 2021 found opportunity to scale via acquisition, including Burger King parent RBI, which purchased Firehouse Subs for $1 billion, and FAT Brands, a multi-brand platform that spent roughly $890 million to buy several concepts.

Although 2022 hasn’t seen too much action in the first six months, the market does appear to have picked up steam as of late. Dave & Buster’s announced in April that it agreed to acquire fellow eatertainment chain Main Event for $835 million, and Denny’s revealed a few weeks later that it would buy Keke’s Breakfast Cafe for $82.5 million. On a smaller scale, Famous Dave’s owner BBQ Holdings purchased Mexican chain Barrio Queen for $28 million and 34-unit sports bar The Greene Turtle bought Clark Crew BBQ, an award-winning restaurant in Oklahoma City.

JPMorgan analyst John Ivankoe noted Darden’s recently announced $1 billion buyback share program could be used for M&A and that the company has borrowing capacity, considering its current investment-grade credit rating. As to how close the company is to an actual deal, Cardenas wasn’t prepared to share.

“I can’t tell you if we are closer or farther away from now versus where we were before," said Cardenas, who recently replaced retiring chief executive Gene Lee. "As equity prices move quickly and on the downward trend, so you got to get to what’s a fair valuation level for the seller. And so I can’t tell you if we are there yet or not. I can tell you that we will continue to evaluate, and we would like to continue to build our scale, and M&A is one way to do that. But when we do a deal, everybody will know. And we are always talking to our board about M&A and the best ways to allocate our capital.”

While Darden explores its options, it continues to bolster organic growth. In fiscal 2022, the company opened 37 restaurants and closed just four, and in the upcoming year, it’s projected to debut 55-60 new units. The pace of expansion depends on the restaurant. The specialty brands —Bahama Breeze, Yard House, Capital Grille, Seasons 52, and Eddie V’s—are site specific and grow as quality spots become available. So development may be higher one year and lower the next. But for Olive Garden and LongHorn, the expectation is that growth will increase consistently year after year.

Cardenas described Darden’s measured unit growth strategy as “putting our foot on the gas,” but not “slam the accelerator down.” Overall, the restaurant platform ended fiscal 2022 with 1,867 stores systemwide, including 884 Olive Garden locations and 546 LongHorn stores.

“We continue to look for more real estate, especially if the macro environment slows down for the smaller competitors,” Cardenas said. “I would say there are some industry estimates that this coming up fiscal year will have no net unit growth. We are growing units. And so that could give us some more opportunities to find some sites.” 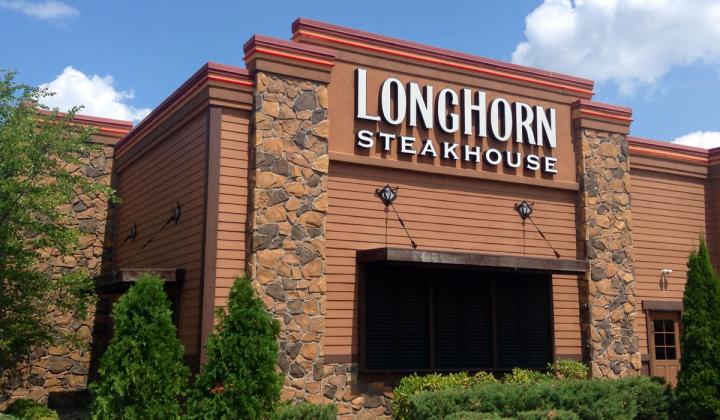 In terms of total sales, segment profit, and average weekly sales, each concept garnered better numbers in Q4 and fiscal 2022 than it did prior to COVID.

Darden achieved these results with higher-than-expected inflation in the background. The company saw just over 6 percent inflation for the year, more than doubling its 3 percent projection. In the fourth quarter, hourly wage inflation grew 9 percent and commodity inflation increased 12 percent.

Despite these pressures—and the fact that Darden took 3 percent pricing in 2022, well below inflation—the company achieved a restaurant-level EBITDA margin of 19.9 percent in Q4, 40 basis points above pre-COVID levels. For the whole year, it earned a margin of 15.9 percent, nearly 200 basis points higher than pre-pandemic comparisons.

Cardenas noted that because of rising costs facing consumers, sentiment is at its lowest point in several decades. But the group refuses to overreact; instead it will rely on scale and media messaging to convey differentiated value. Cardenas pointed to current commercials highlighting Olive Garden’s Alfredo sauce—the highest-rated ad it’s had in years.

The CEO isn’t sure whether a recession is coming, but if the moment comes, he believes Darden is well-equipped to handle it because of pre-COVID staffing levels, low management turnover, and pricing below the competition. The key, Cardenas said, is to not overreact and create a long-term issue, and that means no deep discounting.

In fiscal 2023, Darden projects total sales of $10.2 billion to $10.4 billion and same-store sales growth of 4-6 percent. Inflation is expected to be 6 percent, and the company will price under that at 5 percent. Capital spending will be between $500 million and $550 million.