Cracker Barrel’s menu is also shifting to accomodate the needs of off-premises.

The year is off to a solid start for the classic brand.
March 2019 Rachel Taylor

Cracker Barrel is settling into the new age of casual dining where off-premises offerings are just as important to some guests as dine-in options. The 659-unit chain is benefiting from the expansion of this segment and looking for ways to grow.

So far in 2019, Cracker Barrel has been able to post two consecutive quarters of positive same-store sale growth. Its second quarter comps lifted 3.8 percent. Higher check averages and traffic—an increase of 3.7 percent and 0.1 percent, respectively—contributed to this quarter’s results.

The retail side of Cracker Barrel did not fare as well, though. Same-store retail sales fell below the company’s expectations with a 1.4 percent decrease. The company attributed these losses across decor, food, holiday, and collegiate categories.

“We felt well-positioned heading into the second quarter after our solid first quarter results that included strong sales in our holiday merchandise themes,” Cracker Barrel’s chief executive officer, Sandra Cochran, said. “Knowing that we would begin the quarter with lower than planned inventory levels we supplemented our offerings with additional assortments.”

Unlike past quarters, this quarter’s sales increase coincided with increased traffic, lifted by the holiday season.

The traffic increase is a solid improvement from last quarter, but the trend remains challenged..

“We are pleased with the quarter as a whole, as we continue to make progress in driving performance through an increased focus on our menu, the guest experience, and the continued expansion of our off-premises business,” Cochran said. 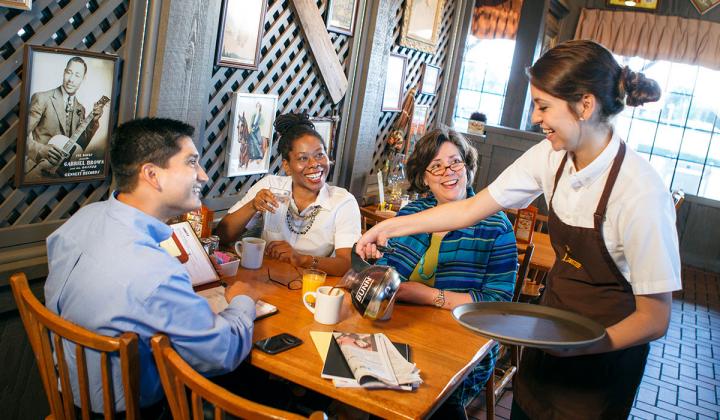 Cracker Barrel got its traffic back in the green in the second quarter.

Holidays have always been an important part of Cracker Barrel’s business model and as off-premises continues to grow, the company wants to be the “go-to holiday destination, for both in-store and off-premise dining occasions,” Cochran said. The Country fried Turkey offering worked especially well with off-premises customers.

“We believe the continued growth of the Thanksgiving and Christmas Heat n' Serve offerings underscore the trust that guests have in Cracker Barrel to provide a convenient delicious home cooked meal during these special occasions,” Cochran said. “We had a number of initiatives to  grow that I touched on … that were very successful. So I think we were able to capitalize on the momentum in off-premises dining, as well as to have some offers that fit both the need, especially of the holiday season, fit with our brand and fit with our type of food.”

Off-premises sales during the second quarter grew 200 basis points compared to the previous year. Last year, off-premises accounted for 7.5 percent of sales. The company is hoping to increase that number to 9 percent for 2019.

“As we look at off-premises, so all three channels grew, so individual to-go grew over 10 percent and catering and our occasion grew 50 percent,” Golder said. “So they all relatively equally contributed to that overall growth.”

Between holiday Heat ‘n Serve offerings and catering, the company is hoping to capture guests during holidays, like Easter, along with other major holidays, like Christmas and Thanksgiving. Cracker Barrel will also be testing Mother’s Day in select stores to see how guests react during a smaller holiday.

“We're looking forward to the Easter occasion and are optimistic about its potential sales growth over the prior year, as we look to further grow this occasion,” Cochran said.

Cracker Barrel’s catering is also shifting to accommodate larger parties and allow more customization, which in turn should grow the off-premises segment further. Investments in delivery vans and catering sale managers are helping round out catering operations.

“We're pleased with the growth in our off-premises business and we are focused on ensuring that we have the right processes and infrastructure in place to protect the overall guest experience,” Cochran said.

Cracker Barrel’s menu is also shifting to accomodate the needs of off-premises. The upcoming launch of Southern Fried chicken will hopefully boost takeout and catering sales during non-holiday driven months.

“We see that fried chicken kind of lends itself to off-premise consumption and we've been thinking about the offer whether it's a picnic basket type offer for a family meal or a catering offer,” Cochran said.

To differentiate the new Signature Southern Fried Chicken from the current Homestyle boneless chicken, the fried chicken is bone-in. The new chicken dish is currently offered in 400 stores, but there will be a nationwide launch in May. Installation of new equipment and training is currently underway at 500 stores so the system will be ready for the launch later this spring.

Cracker Barrel’s Homestyle chicken is currently only available on Sundays, but the new equipment and training will allow stores to offer it seven days a week, Cochran said.

“That's a very popular offering and we're pleased to be able to do it,” Cochran said. “We'll be able to offer things like sandwiches, eventually we can do a hand breaded dipped tenders with some rubs or flavoring. So the culinary team has got some ideas and thoughts about how to build on this platform over the next several years really.”

Golder projects Cracker Barrel will invest about $10 million in business improvements, including the new equipment and training that will lead to long-term sustainable cost savings.

Analyst Jake Bartlett pointed out this figure is on the lower end of previous projections in the range of $10–$12 million. However, the number is on par with Cracker Barrel’s cost-cutting initiative for the year, Golder said.

“We brought that down a little bit, because we've delayed a couple of initiatives, the timing of the introduction of some of those initiatives to make more room for the launch of our bone-in fried chicken,” Golder said. “So for example, the timing of the POS and the tablets has been pushed out.”

Previously Cracker Barrel was expected to hit its goal of $40 million in cost savings in 2020, but it looks like that goal will be further down the line.

“As we look at our $40 million target, we still have confidence that we'll achieve that target,” Golder said. “We think it may take an additional year or two. But, yes, we do believe that we will achieve the $40 million in cost savings.”