The chain is raising prices, but in a way that keeps a better pulse on consumer reaction.

Like the rest of the industry, Cracker Barrel has spent the past year grappling with inflation.

The next couple of months are expected to be even rougher.

The 664-unit casual-dining chain previously projected Q3 commodity inflation of 13-15 percent and wage inflation of about 10-12 percent. On Tuesday, the brand updated its expectation, announcing that it foresees the higher end of those ranges—15 percent for commodities and 11-12 percent for wages.

CEO Sandy Cochran attributed the bump to minimum wage increases, particularly in Florida, and the continued fight over labor. Accounting for these factors and seasonally low sales volumes, adjusted operating margin should be 5 percent in the third quarter, according to the restaurant, down from 7.8 percent in the year-ago period.

“Our near-term operations priority for the third quarter is on store-level execution,” Cochran said during the chain’s Q2 earnings call. “Over the past two years, our managers have done an outstanding job of handling disruptions from COVID restrictions, staffing shortages, and supply chain challenges in both restaurant and retail.”

“As these disruptions continue to moderate, we should be better able to focus on and reinforce key Cracker Barrel operational fundamentals, and offer our guests the consistently outstanding experience that they expect,” she added.

To mitigate pressures, Cracker Barrel carried 5.3 percent pricing in Q2, and the company plans on taking additional price in Q3, to put it over 6 percent in the second half of the fiscal year. On top of that, the brand believes it has room to implement another modest price increase in the fourth quarter.

Despite these raises, the company hasn’t experienced any meaningful pushback from customers. To ensure that remains the case, Cracker Barrel is undergoing several, smaller price upticks instead of two major hikes that it historically implements. This gives the brand opportunity to evaluate consumers’ reactions versus the control group and provide flexibility to cancel or change a price increase if it appears to have an adverse impact.

Chief Marketing Officer Jennifer Tate noted Cracker Barrel has such strong equity in everyday value that it hasn’t relied on LTOs or couponing, and the brand is committed to maintaining that positioning. And that goes for every daypart, whether it’s the $5.99 Sunrise Specials at breakfast, or the weekday lunch features at $6.99.

“These are not obscure things,” Tate said.  “These are classics like meatloaf and chicken ‘n dumplings and broccoli cheddar chicken. ... They’re core favorites, broadly appealing, high-mix items that are at these everyday values. So I think, because we’re protecting those and we’re committed, we feel like our guests are still going to know us as a destination for everyday value.” 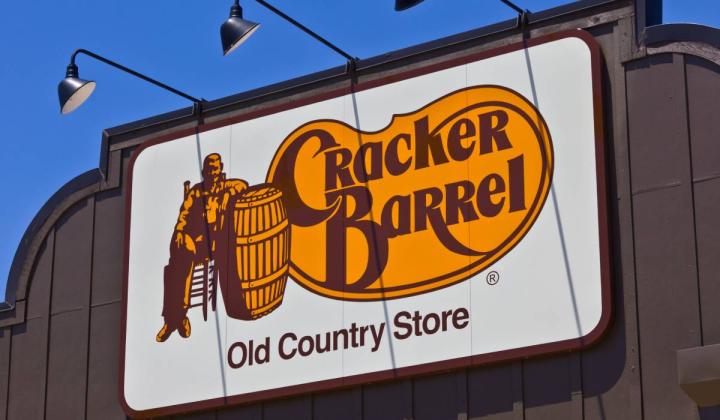 While commodities are historically variable and should wind down, Cracker Barrel believes high wage rates will be more permanent. So in addition to cost-saving projects, like supply diversification and G&A management, the company is tackling longer-term initiatives to simplify the operational environment, like reimagining how restaurants approach and incentivize retail and restaurant responsibilities and leveraging technology to improve execution.

One key piece will be the chain’s new POS system. The solution should be in all stores by the end of Q3, and will support the continued rollout of the new food cost management system that’s currently in 400 units, but will be systemwide soon. Additionally, the POS technology will facilitate a new labor management system launching in fiscal 2023.

“Our food and labor management systems are part of a broader strategy to improve our business model to allow us to eventually move toward pre-pandemic levels of profitability despite the high inflationary environment in which we find ourselves,” Cochran said.

Off-premises sales mixed 24 percent in the second quarter and were approximately flat compared to last year, which is impressive considering nearly 20 percent of restaurants in the year-ago period were operating off-premises only for at least a portion of the quarter.

Comps were rising in the mid-single digits until December, when Omicron drove declines through the end of the month and into January. But as COVID cases have decreased, restaurants have seen a noticeable bump in consumer confidence.

After seeing an acceleration of COVID exclusions and reduced operating hours, Cochran said application flow is increasing, meaning managers can be more selective in the hiring process. She estimated that only about 10 restaurants would be considered “critically understaffed” right now.

“I'm confident that we have the staffing in place to meet the anticipated traffic recovery in the third quarter and that we will be well-positioned in this regard as we head into our busy fourth quarter,” Cochran said.

Absent another wave of surging COVID cases, Cracker Barrel believes its sales and traffic recovery will continue into the fourth quarter. The chain also expects inflation to moderate, and combined with average check growth and multiple cost-saving actions, margins are projected to approach last year’s levels.

The chain is preparing for a busy summer travel season, even with the higher-than-usual gas prices.

“I think we believe that folks have gotten more used to generally higher inflation right now,” said CFO Craig Pommells. “So we think that will mitigate what we would normally see at these type of gas price levels. Now, if gas prices go up significantly from here that could change the outlook. But I think our thinking is in the context of generally broader inflation, that those two things will kind of mostly mitigate each other, but we'll see.”

In the second half of fiscal 2022, the company plans to open two Cracker Barrel stores and between nine and 11 Maple Street Biscuity Company stores. The Maple Street guidance was previously 15 restaurants during the fiscal year, but the projection was lowered due to construction delays.